Ukrainian officials have denied there was a weapons depot nearby.

• CCTV footage captured near a pond roughly 600 metres north of the shopping centre, on the other side of a factory building, shows two missile strikes in the area.

• There's simply no evidence - nor has any been offered - that Ukraine bombed the shopping centre, or that the attack was "staged". 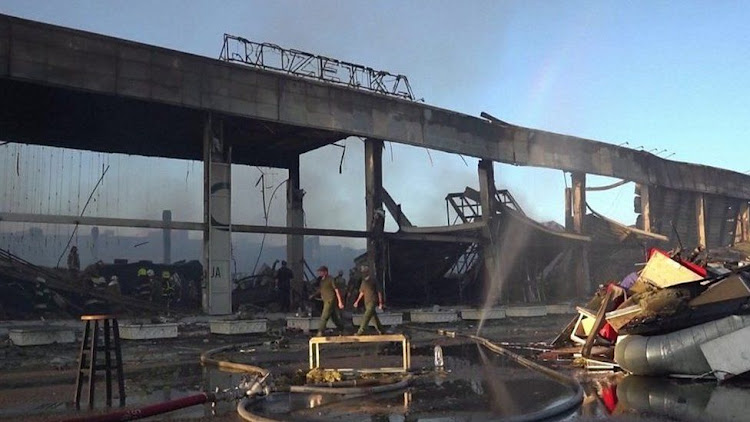 The aftermath of a missile strike in Kremenchuk
Image: REUTERS

Within hours of the attack on a shopping centre in the central Ukrainian city of Kremenchuk, false and unproven claims began circulating online.

Stories were spread by Russian Telegram channels and by Dmitry Polyanskiy, Russia's deputy ambassador to the United Nations. They included rumours that the attack was "false" or "staged" - and were repeated on Russian television.

On Tuesday, Russia's defence ministry released a statement claiming the shopping centre was "non-functioning" and that the bombing of a nearby ammunitions dump sparked a secondary fire at the centre. Those claims were denied by Ukrainian officials. 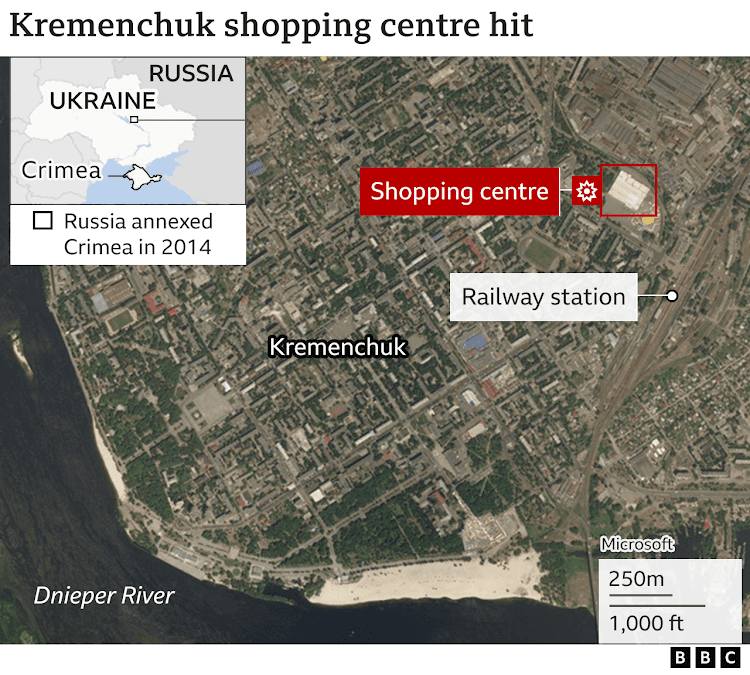 Claim: The shopping centre was 'non-functioning'

This claim is false. BBC reporters on the ground have spoken to shoppers and employees who were inside the building at the time of the attack.

Multiple posts listing details of missing people who were either working at the shopping centre on the day or went shopping there, were published in a local Telegram channel in the hours after the attack. 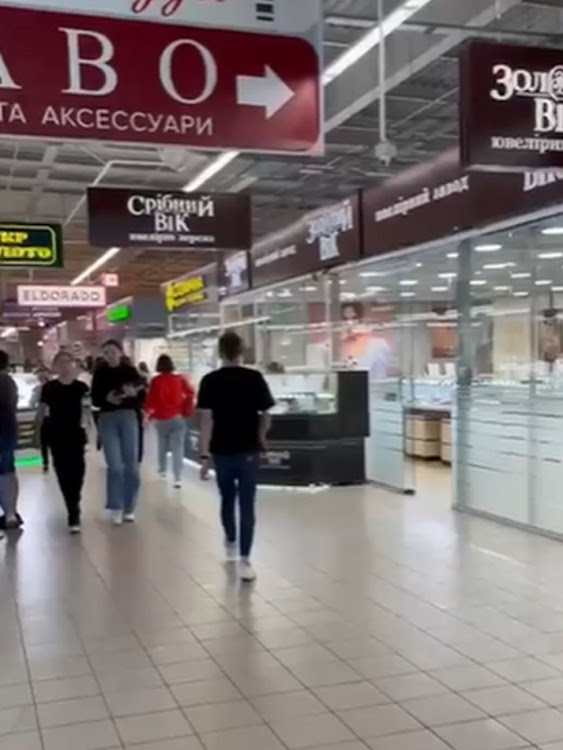 Inside the shopping centre things appeared to be relatively normal in a video filmed two days before the attack
Image: MARINA DOOHOVA

She also shared video she had taken at the shopping centre from 25 June, showing open shops and people walking inside the building. Other, similar footage posted online appears even more recent - including a YouTube video apparently filmed just hours before the attack, also showing shoppers and businesses open as normal. 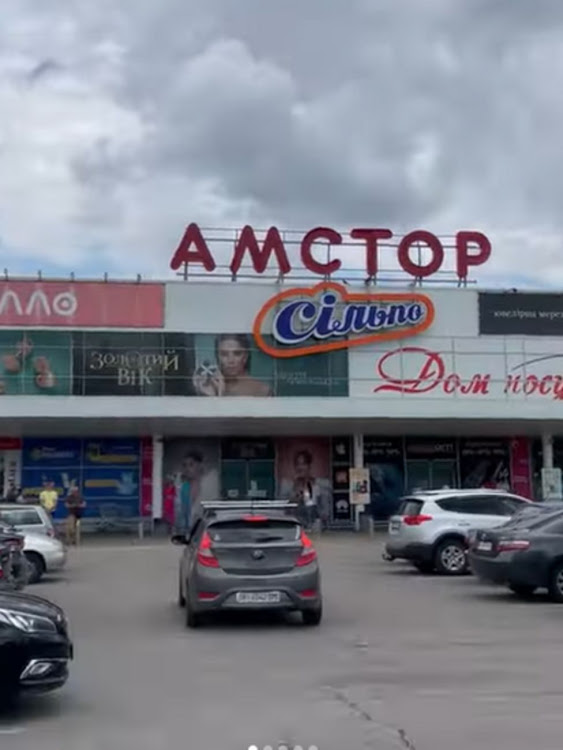 A still from a video showing businesses open as usual two days before the attack
Image: MARINA DOOHOVA

Some Telegram channels claimed there were no women or children at the shopping centre - implying that the building had been turned into a military facility. That claim is false, according to several eyewitness accounts and online videos.

Claim: The bombing of a weapons depot spread fire to the shopping centre

The Russian Defence Ministry claimed a strike on an arms storage facility detonated ammunition which set the shopping centre on fire.

"Western-manufactured weapons and ammunition stockpiled in the warehouse to be sent to a Ukrainian military grouping in Donbas were hit with a high-precision strike," the ministry said.

Ukrainian officials have denied there was a weapons depot nearby.

CCTV footage captured near a pond roughly 600 metres north of the shopping centre, on the other side of a factory building, shows two missile strikes in the area.

Matching the exact spots where the two missiles land in the CCTV video with aerial images of the area, it appears one missile hit close to the eastern end of the shopping centre, while the other struck the northern end of the factory, near the southern edge of the pond. 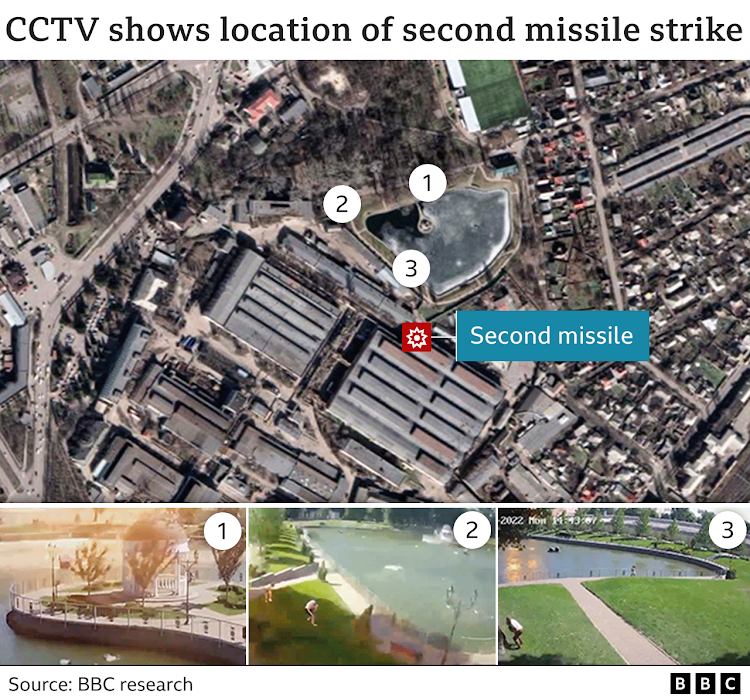 The factory mentioned by the Russian defence ministry is located roughly 300 metres north of the shopping centre. The buildings are separated by a wall, vegetation and rail tracks, making the claim that "secondary explosions" caused a large fire with multiple casualties in the shopping centre unlikely.

According to the Ukrainian online publication Kyiv Independent, a press officer of the regional administration confirmed that the machinery plant had been hit, injuring two individuals.

Claim: The attack was "staged" or a "provocation" 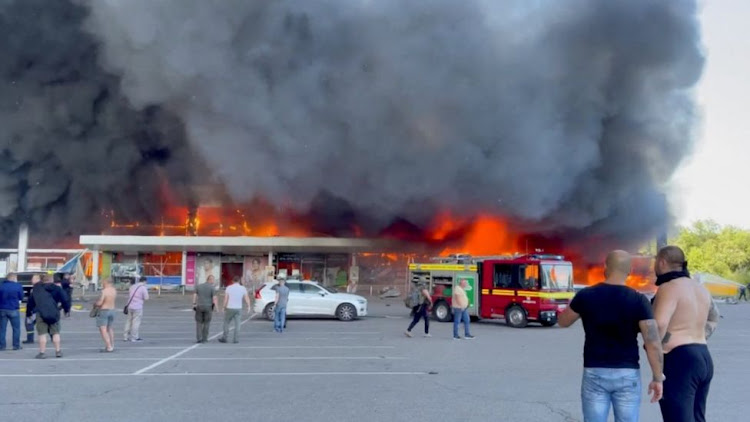 This claim contradicts the official Russian defence ministry statement - even though top diplomats such as Mr Polyanskiy, the deputy UN ambassador, described the Kremenchuk attack as "a new Bucha-style Ukrainian provocation" on Twitter.

There's simply no evidence - nor has any been offered - that Ukraine bombed the shopping centre, or that the attack was "staged".

It's the latest example of a common tactic used by supporters of the Russian government - throwing multiple, conflicting, evidence-free narratives out in the immediate aftermath of an attack.

The claim echoes other, debunked false assertions by Russia and its supporters, for instance that the attack on a maternity hospital in Mariupol and the killings of civilians in Bucha were somehow faked or staged.

In a Twitter message, Mr Polyanskiy said the attack "will be used by Ukraine to attract as much attention as possible through promoting [a] false version of what happened" and "my tweet doesn't contradict the explanation provided by Russian [Ministry of Defence]".

At least 18 people have died in a missile strike on a mall believed to have had about 1,000 people inside.
News
1 month ago
WATCH: The latest news from around the World
by BBC NEWS None
Fact Checker
28 June 2022 - 19:18