He has reportedly presented a degree certificate from Uganda showing he graduated in 2016.

•In a video uploaded on singer Nyashinski's YouTube channel on September 22, 2020, Nairobi Senator Johnson Sakaja said he has never pursued education out of the country.

•The two were sharing seminal moments in their career journey when Sakaja divulged that he has never pursued education out of the country. 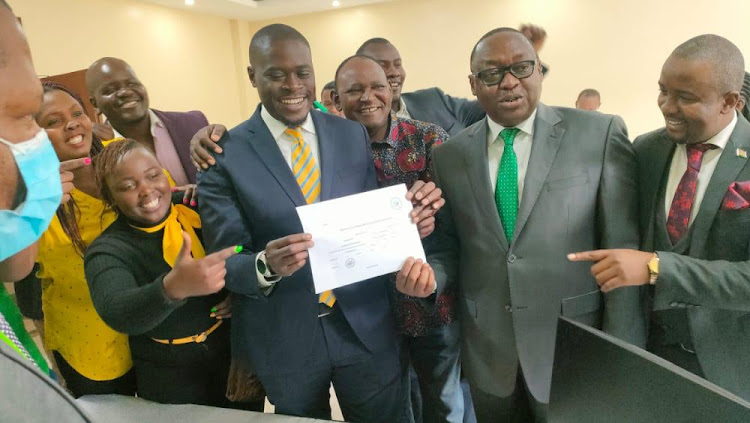 Senator Johnson Sakaja cleared by the IEBC to run for Nairobi’s Governor seat on UDA ticket in the August poll on Tuesday, June 7, 2022.
Image: Maureen Kinyanjui

The university papers of Nairobi Senator Johnson Sakaja have been a subject of discussion and social media trends in the past few weeks.

In a video uploaded on singer Nyashinski's YouTube channel on September 22, 2020,  Sakaja said he has never pursued education out of the country.

The two were sharing seminal moments in their career journey when Sakaja divulged that he has pursued all his education in Kenya.

Loosely translated to: "I have never pursued education out of Kenya. I pursued all my education here in Kenya".

But nearly two years after the Interview, Sakaja is reported to have been cleared to vie for the Nairobi Governor seat with a degree certificate from a Ugandan institution, Team university.

A degree is a mandatory requirement for anyone seeking a Governor seat in Kenya.

A report by Nation indicates that the certificate shows he graduated from Team University in 2016.

According to the daily, the institution says he pursued his education online.

His certificate has also been confirmed as authentic by relevant authorities in Uganda making it difficult for the Commission of University Education of Kenya to reject it.

Sakaja had fashioned himself as a graduate of the University of Nairobi where he earlier said he graduated with Actuarial Science.

But details have emerged that the Senator is yet to graduate from the university since joining the institution in 2003.

A letter from the University of Nairobi Deputy Vice-Chancellor Julius Ogeng'o to the Director of Criminal Investigations dated May 31, 2021, confirms otherwise.

The letter confirms that indeed Sakaja is still a student of UoN.

Ongeng'o, however, revealed that the Senator never graduated from the university as there is no record in the graduation booklet confirming that.

On the completion of his studies, Ong'engo said: " Records available indicate that he did not complete his studies".

The university also responded to queries about alleged transcripts claimed to belong to Sakaja while he was at the University of Nairobi.

"The attached copies of academic transcripts are incomplete and not signed by officers  of this university."

Sakaja yet to graduate from UoN since joining in 2003

Sakaja has on numerous occasions fashioned himself as a graduate of UoN.
News
5 months ago

Sakaja assured his supporters he will win the Nairobi seat and work for the people.
News
5 months ago
Post a comment
WATCH: The latest videos from the Star
by STAR REPORTER
Fact Checker
12 June 2022 - 10:06
Read The E-Paper