Ruto is still in the UK for his tour.

• The contents of the press release show Ruto postponed his engagement in the United Kingdom due to avoidable circumstances.

• Apart from the title, first and second paragraphs, the rest of the paragraphs are replicas of Hussein's original statement on Ruto's visit to the UK. 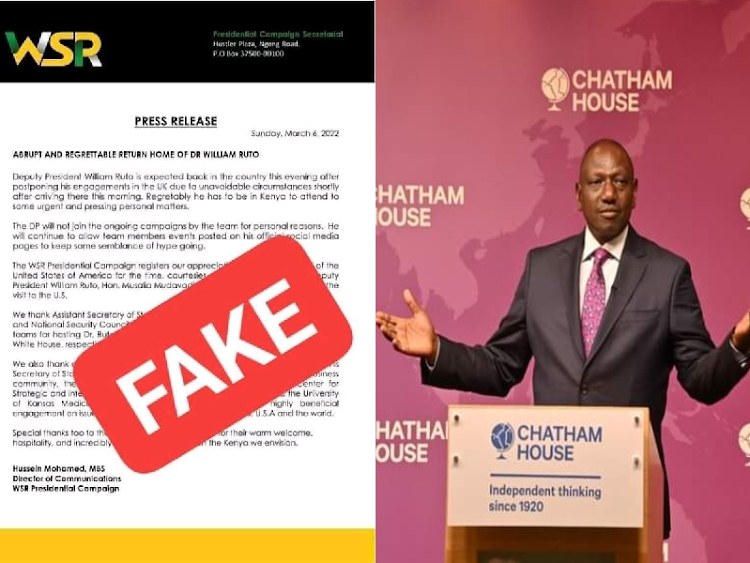 The contents of the press release show Ruto postponed his engagement in the United Kingdom due to avoidable circumstances.

"Deputy President William Ruto is expected back in the country this evening after postponing his engagements in the UK due to unavoidable circumstances shortly after arriving there this morning. Regrettably, he has to be in Kenya to attend to urgent and pressing personal, matters," the fake press release reads in part.

It adds: "The DP will not join the ongoing campaigns for personal reasons. He will continue to allow team members to have events posted on his official social media pages to keep some semblance of hype going".

Pesacheck has established that the press release was seemingly doctored to mislead the public. 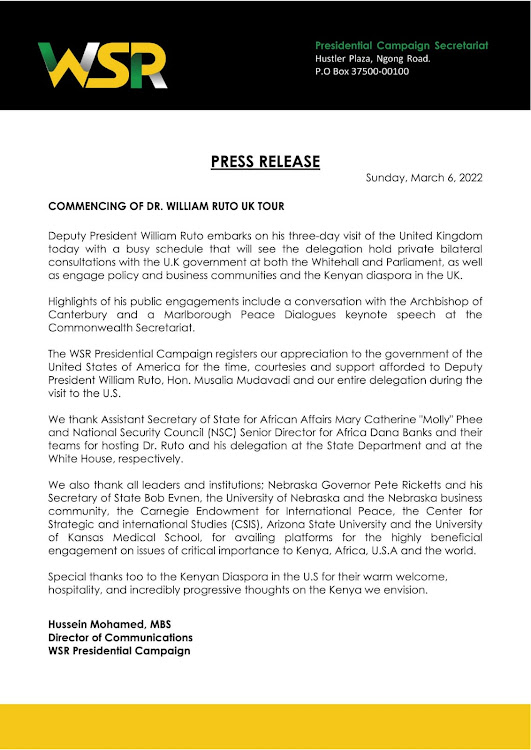 The crafter (s) of the fake release edited the original version of Hussein's press statement on the DP's visit to the UK and added the misleading information in the first and second paragraphs.

Apart from the title, the first and second paragraphs, the rest of the paragraphs are replicas of Hussein's earlier release including the date and other signature aspects of DP's official communications from his campaign team.

Also, the DP has continued with his tour of the United Kingdom despite the fake release announcing otherwise.

Ruto has addressed Kenyans in diaspora, Chatham House and is also set for a series of engagements in the UK.

President 'Biden' tweet on Ruto's visit to US fake

The alleged tweet is fake since Biden is yet to comment on Ruto's visit.
News
3 months ago

FALSE: Ruto’s image with US President Biden is fake

Ruto's team has not shared any photo taken during the White House meeting.
News
3 months ago
“WATCH: The latest videos from the Star”
by BOSCO MARITA
Fact Checker
08 March 2022 - 00:24