Statement on list of UDA leaders given direct tickets fake

• The fake letter did not have the signature of UDA NEB chairperson Anthony Mwaura. 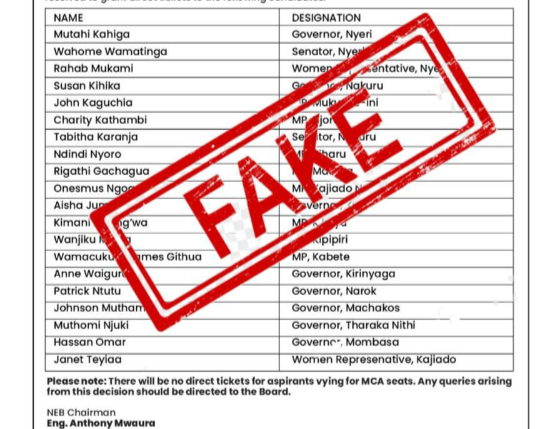 The letter is fake.
Image: UDA

The country is approaching the August 9 General Elections where Kenyans will be exercising their democratic rights to vote in new leaders right from the presidency to Members of the County Assembly.

Even so, it is a season of anxiety, which gives room to propaganda and fake news that is aimed at tainting the image of certain individuals purposely to bring them down in terms of support.

The same propaganda can also target some political parties in the country.

On Thursday, the United Democratic Alliance of Deputy President William Ruto was forced to dismiss the notice that was being circulated on social media purporting that the party had issued direct tickets to some individuals close to the DP.

“On 26 February 2022, our party leader Dr William Ruto vouched for consensus and dialogue between aspirants vying for the same position to avoid confusion during UDA party primaries. This proposal has received massive support from party members and aspirants, who suggested specific areas and positions that should be exempt from nominations,” the letter alleged to have been signed by UDA NEB chairman Anthony Mwaura claimed.

According to the letter, Nakuru senator Susan Kihika, Governor Mutahi Kahiga of Nyeri, Kirinyaga Governor Anne Waiguru, Nyeri Woman Rep Rahab Mukami among the twenty listed leaders had been given tickets for various seats that they are seeking. 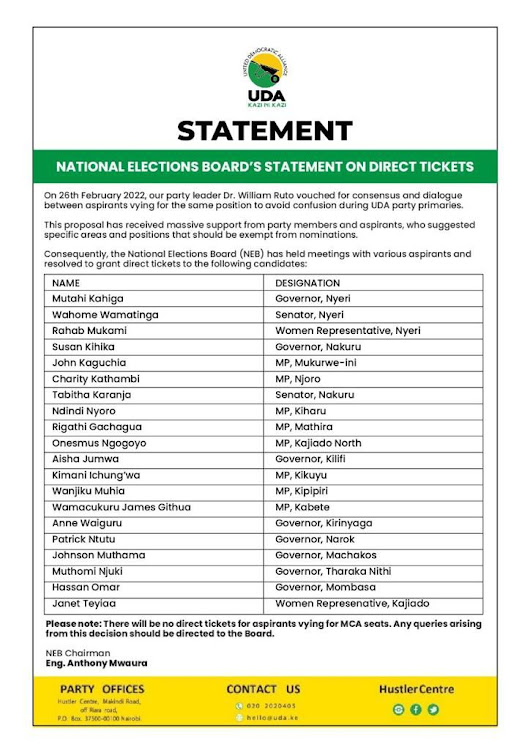 The letter that has been termed fake.
Image: UDA

Also, Keroche Breweries CEO Tabitha Karanja who will be seeking to be the next Senator for Nakuru was among the names listed.

However, the fact-checker has confirmed with the party that the letter did not originate from Anthony Mwaura, nor any official from the party.

Also, the fake letter did not contain Mwaura’s signature, which has always been to the party statements.

Kenyans have been asked to ignore the letter.

The official statements are always being shared or posted to the party official social media account, or by the leaders who have signed it.

Photos of Ruto allegedly arriving in US taken in 2018

It was when Ruto was receiving a Kenya Airways plane from New York.
News
2 months ago

Despite her clarification, questions still linger on her stand regarding OKA's latest move.
News
2 months ago
“WATCH: The latest videos from the Star”
by KEVIN CHERUIYOT Online Journalist
Fact Checker
03 March 2022 - 15:46