• Ruto has been saying how his government if he wins will be implementing the Bottom-Up Economic model, and has indicated the political conmanship as claimed in the letter.

• The fact-checker has verified that the letter is fake and did not originate from David and as alleged. 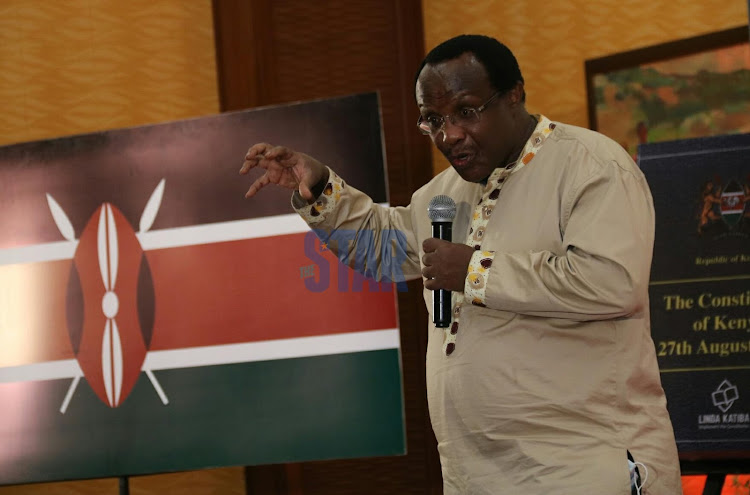 Economist David Ndii at the launch of the Linda Katiba initiative on February 1, 2021.
Image: FILE

Economist David Ndii, who is a close ally ofDeputy President William Ruto was forced to defend his stand politically following a circulated letter over his future.

The one-page letter dated December 7, 2021, with a headline ‘Open Letter to Deputy President William Ruto’ had claimed that Ndii had been provoked by a sequence of personal issues and had tendered his resignation as the DP’s personal economic advisor.

“Having originated the concept of bottom-up economic model, which seeks to uplift the proletariats, which was also in the NASA 2017 campaigns, I have to realise that my position as UDA’s economic strategist is untenable,” part of the fake letter stated.

“Political conmanship: The bottom-up economic model is an apparent departure from trickle down model, in bottom-up, there’s economic inclusion of the masses spurring developments whereas in the trickle-down, the Government targets owners of capital for economic development. This was my initial belief with you only to realise that you are using the model for the sole intent of capturing power and do not believe in its tenets and or spirit.”

The fact-checker has verified that the letter is fake and did not originate from David and as alleged.

If the statement was from Ndii, he would have shared or posted in his official social media accounts such as Twitter as he always does.

In his page, the recent letter is the one dated March 25, 2020, whereby he was addressing President Uhuru Kenyatta regarding the Covid-19 situation in the country.

Also, the style and fonts used in writing the fake letter is far different from the ones used in the previous statement from him.

Also, his signature in the fake letter do not match with his official one, same with his quote as he signs off as indicated:

Also, the timing of the letter is questionable, as it comes days before the Azimio La Umoja convention that will take place at the Kasarani International Stadium on Friday, December 10, 2021, where ODM leader Raila Odinga is expected to declare his candidature for the 2022 general election.

In his campaigns across the country, Ruto has been saying how his government if he wins will be implementing the Bottom-Up Economic model, and has indicated the political conmanship as claimed in the letter.

Also, Ndii’s position as the UDA economic strategist in UDA is not official or rather does not exist as claimed in the letter.