• Some lawmakers taking advantage of the handshake to push for unapproved projects, but ministries are reluctant to yield to their demands 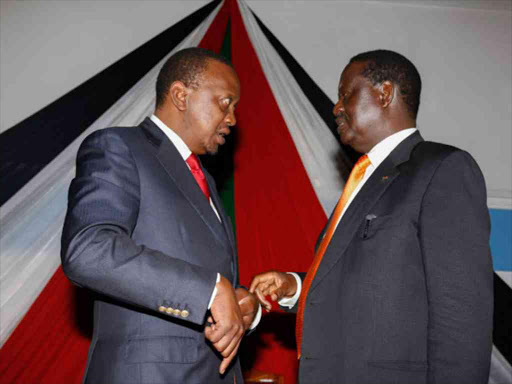 Are some Nasa MPs taking advantage of the handshake between President Uhuru Kenyatta and their leader Raila Odinga? A senior government official has told Corridors that some Nyanza MPs have been pushing a senior official at State House to direct ministries to irregularly award tenders. Corridors has been told that some of the ministries are reluctant to follow the oral directive. They want everything in writing so that in case of a problem, individuals who authorise then will be held responsible.

The saying ‘still waters run deep’ seems to be coming true, if the latest move by a calm and down-to-earth second-term lawmaker is anything to go by. A mole whispered to Corridors that the MP has acquired a state-of-the-art helicopter in preparation for the 2022 campaigns. However, some pessimistic quarters were overheard dismissing the investment saying it will not translate into votes, especially in the uncertain political terrain that is 2022 politics.

Residents of a Western county are angry over a county assembly speaker, whom they say acts as if he is immune from graft investigations. The assembly leader, our mole says, has found a way of avoiding scrutiny by ‘taking care of his staffers’ so well that they ‘see no evil and hear no evil’. Corridors is informed that the speaker has even put some journalists at the county on the assembly payroll for them to play ball. The residents want the EACC to dispatch a team of detectives, not from the county, to dig into the assembly’s books of accounts.

Aides attached to a second-term legislator are unhappy with a guest who frequents the lawmaker’s office nearly every day. The young girl, in her 20s, is reportedly the politician’s mistress. A member of staff told Corridors that the girl makes ludicrous demands, at times insisting she has to use the legislator’s official desk while waiting for him to return to the office. This has not gone down well with the staff. The lot has vowed to teach her a lesson if the lawmaker continues to entertain her excesses.

A former MP and ex-city official has set tongues wagging at City Hall. The man has been camping at City Hall corridors seeking an audience with Governor Mike Sonko. Last week, the politician visited the county offices three times in a row but failed to see the governor. It was not clear why the former powerful mayor wanted to see the governor but an insider has intimated that the fellow was after handouts.

Post a comment
WATCH: The latest videos from the Star
by STAR TEAM The Star
Corridors of Power
12 March 2019 - 00:00
Read The E-Paper