Agricultural land is being subdivided for commercial buildings, said Wamatangi

• Farmers were given avocado and maize seedlings to plant last month 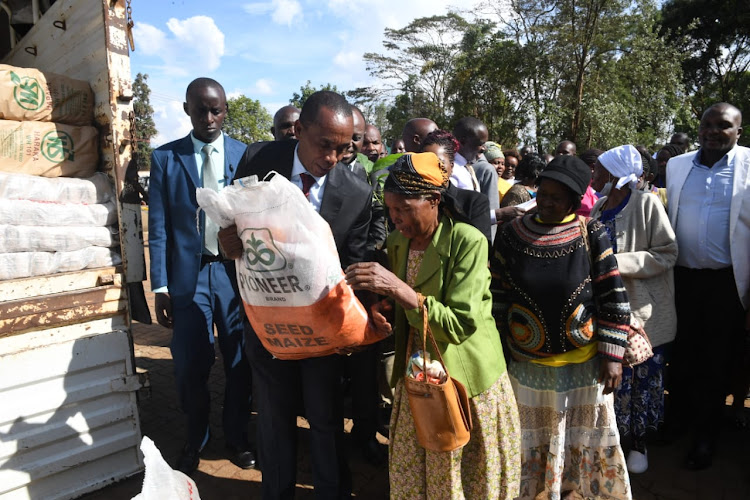 Governor Kimani Wamatangi hands over a seed maize bag to a Kiambu farmer during the launching of distribution of free maize seedlings to farmers
Image: STANLEY NJENGA

Kiambu risks finding itself in need of relief food after turning its arable land into buildings, Governor Kimani Wamatangi has said.

Speaking in Kiambu county headquarters offices in Kiambu town last month, Governor Kimani Wamatangi said the county should instead be one that can help feed other counties.

"We have a population of 3.1 million people," Wamatangi said, while flagging off maize and avocado seedlings.

"If we do not plan ourselves to attain food security, it would be shameful to be in the forefront of receiving relief food despite having good soil for growing sustainable foods."

Some 30,000 hass avocado seedlings and Sh25 million maize seedlings are being distributed to Kiambu farmers to address food security.

Wamatangi said his administration should start asking hard questions as to why agricultural lands are being subdivided to pave way for commercial buildings.

"It's time we started asking hard questions and finding a solution of having a spatial plan that allows agricultural land to remain as such to address the issue of food security."

The county boss said his administration is set to build 20 new modern markets to enhance trade as a source of income for residents.

"The county government has committed to fund the construction of more than 20 new markets at a cost of Sh1 billion," Wamatangi said.

Others are Kinoo and Kerwa in Kikuyu; Uthiru and Muguga in Kabete; Kagwe in Muchatha, Kiandutu in Gatuanyaga, and Ndumberi and Tingánga.

The governor said upon completion, the markets will house more than 30,000 business operators. In addition, his administration will embark on constructing five mega markets, namely Madaraka, Kangangi, Githunguri, Wangige and Githurai.

Wamatangi said the subsidised fertilisers from the national government have already been distributed and promised to source for free fertiliser, which farmers used to get, and add to the farmers.

The governor promised to visit families within the county with gifts in appreciation in the spirit of sharing during the festive period.

Winners and losers as farms are chopped up for sale
Post a comment
WATCH: The latest videos from the Star
by STANLEY NJENGA Correspondent, Kiambu
Big Read
25 January 2023 - 04:00
Read The E-Paper