The art of dotting pages and institute teaching it

• As the world marks World Braille Day tomorrow, here is a two-part series on it

Sightless and sighted students pound away on their Braillers at specific intervals as demanded. The typewriter-like machines have fewer keys than the modern conventional QWERTY keyboards. The learners hope to be experienced Braille paper typists before their graduation. https://bit.ly/3Z8zO9a 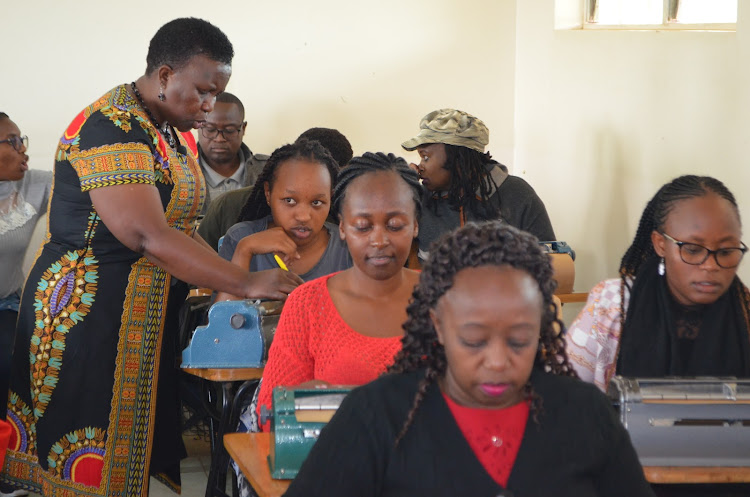 Sightless and sighted students pound away on their Braillers at specific intervals as demanded. The typewriter-like machines have fewer keys than the modern conventional QWERTY keyboards. The learners hope to be experienced Braille paper typists before their graduation.

At the front of this class at the Kenya Institute of Special Education (KISE) is the instructor, Peter Luthuron. He’s blind. He’s teaching teachers Braille reading and how to use the Perkins Brailler machine. The class is undertaking a course in Braille proficiency.

Strapped on Luthuron’s shoulder is a BrailleNote Touch Plus. Stored in this portable digital device that raises and lowers pins to produce Braille symbols is the information he needs and easily accesses to competently conduct the lesson.

“My lesson plan and scheme of work are inside here,” he says. With the tips of his fingers, he senses the propped-up smooth-surfaced silver-coated pins and dictates exercises to the class.

The machine has a flap that opens to reveal a screen displaying the Braille information in print. Audible speech that corresponds to the Braille equivalent can also be output.

“With this gadget, I can read documents of any kind; word docs, PDF or PowerPoint,” Luthuron says. “I can also access the Internet. It’s a gadget that surpasses many of the gadgets we have in our schools.”

KISE has six of such digital machines. “When teachers come here, we train them how to use this,” Luthuron says.

The device has Universal Serial Bus (USB), Secure Digital (SD) and High Definition Multimedia Interface (HDMI) ports. The blind and visually impaired, especially, are striving to become just as adept at using it as their lecturer. But before they get a mastery of it, the springboard is the hardy Perkins Brailler machine.

Luthuron is one of the 56 members of the teaching workforce at KISE. 52 are deployed by the Teachers Service Commission TSC and four by the KISE council. “We have a shortage of staff. Our optimal teaching staff should be 82,” KISE deputy director (programmes) Peter Ndichu says.

“The 56 comprise all areas of disability. These are professionals trained in areas of visual and hearing impairments, emotional and behavioural difficulties, learning disabilities, gifted and talented, physical disabilities and counsellors.”

He cites KISE as the only institution in the country and the region with the highest concentration of special needs personnel.

Ndichu says, “I’m very proud of that gentleman,” referring to Luthuron. “He was my student from Form 1 to 4.  He’s a very bright and committed lecturer.

“He was teaching at a teacher training college and we convinced the TSC to give him to us,” he says. “He has the passion for the job as a teacher. This is what we need. He’s versatile in all areas of special needs.”

KISE emphasises the implementation of the team teaching approach in imparting valuable special needs education skills on learners. The tactic ensures a warm and personalised atmosphere for learning.

“Team teaching is one area that we encourage learners, teachers, instructors and trainers to embrace,” Ndichu says. “It’s a way of mentoring others and it helps lecturers to improve their skills.”

On another day during school closure in December, a distance learning class of about 45 students has come to KISE for face-to-face sessions.

Luthuron takes the lead of his team of three Braille instructors. His class includes learners who are deaf. Bernard Oduor is a sign language interpreter. He interprets Luthuron’s instructions to the class through the Kenyan Sign Language (KSL).

“Braille is very interactive,” Luthuron says. “It may not be very much fit for online because it needs physical manipulation and confirmation.”

The third instructor is on hand, roving around the class to offer any practical help to a learner. Luthuron does so, too, to confirm if the students are correctly executing his instructions.

If errors are made by depressing the wrong keys, the raised dots are suppressed, even with the tip of a pen. Alternatively, wooden erasers could be used to flatten the dots. The surface would be fit for correct dots to be raised.

“We complement one another, especially for such a kind of interactive session,” Luthuron says. “My colleague may remind me of something I have forgotten or he could emphasise on an issue.”

“We want to win the confidence of the learners so that they don’t conclude that we are not knowledgeable,” Luthuron says.

Deaf integrated thanks to TV station, app by Muleka

Braille is interesting. I have learned Braille. It’s very sweet when assisting learners with visual impairment because you can communicate with them more effectively

In a neighbouring class are two sighted lecturers, Peninah Mutuku and Thomas Wanyoike, conducting a co-teaching lesson. “There are some learners who are gifted and talented,” Mutuku says. “Others are slow.  We do rounds to detect weak areas so that we uplift the students accordingly.”

One of the challenges that Mutuku and her colleagues deal with is the perception that Braille is difficult.

“Braille is interesting,” The KISE alumna says, equating it to learning a new language. “I have learned Braille. It’s very sweet when assisting learners with visual impairment because you can communicate with them more effectively.”

A Braille class is restricted to only six dots, which are manipulated in different ways to come up with letters, numbers, words, sentences and punctuation.

Since Braille is bulky, contractions are inevitable. “We take the students through short forms. This entails the use of two or three letters to represent a whole long word,” Luthuron says.

One requirement for admission to such a class is competency in English. The majority are people who are already working in special needs institutions and are here to sharpen their skills.

Naima Wevoko teaches at Kinderworld International School in South C. She’s in one of the KISE classes. She’s self-sponsored.

“At first I thought I couldn’t do it,” she says. “Currently, the study is amazing. It’s all about practising.”

She enrolled at KISE since she got to know that the institution offers a wide spectrum of special needs education. Students are taken through all of them during their first year. She would specialise after this exposure.

“I would hear that Braille is hard,” he says. “Indeed, it is. But once you spare time to bond with the Braille machine, then things start to become easy.”

Munene has experienced some benefits of team-teaching. “One teacher may be dwelling on a certain concept but a learner isn’t grasping it,” he says. “Another instructor comes up with an easier explanation than the previous instructor.”

Luthuron understands that Braille is a little bit difficult for those who are getting into it for the first time. “I compose simple melodies or tunes to remind the students of a certain arrangement of Braille dots.”

The blind are unable to see. The visually impaired may be seeing blurry images. These disabilities have not impeded their ability to read and write. With the six dots, “We can write any word in the world,” Luthuron says.