Comred is giving grants to self-help groups to plant, not cut, mangroves 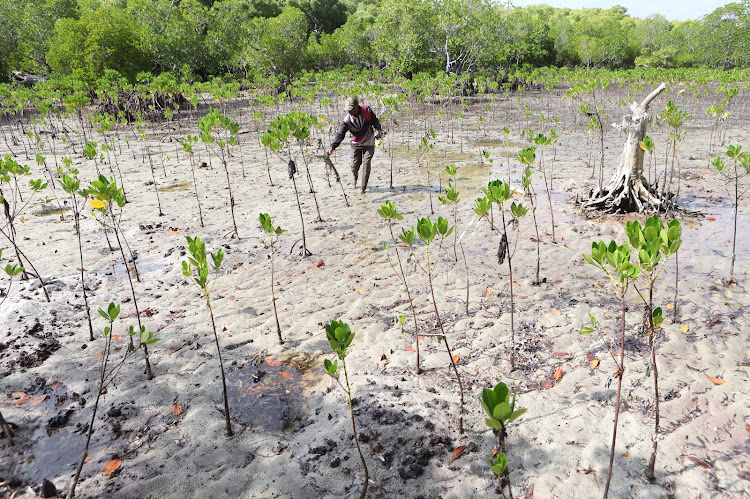 Mwanasiti Juba unties a goat and transfers it to a greener patch near her homestead as others cry out for attention for a similar move.

This is Nyumba Sita village in Msambweni, Kwale county, where most scenes in homesteads are cassava plants and coconut trees.

In Coastal Kenya, many women diversify the coconut trees and cassava plants and trade the products, but with excess supply, the profits are not promising.

Due to poverty, few homesteads have expanded activities beyond these two plants to boost family economy.

However, a loan that Juba got from Shangani self-help group, where she is a member, empowered her to venture into goat keeping.

With the loans, she has also established a clothes business, where she sells children's football jerseys.

The mother of two hopes to get another loan to build a cage to expand her chicken business.

The Shangani self-help group is one of the beneficiaries of an eco-credit scheme, where a conservation organisation, Coastal and Marine Resource Development (Comred), gives grants to community groups as an incentive for conservation as they boost the economy of members.

While the groups are not required to refund the money to Comred, there is a catch: the members must involve themselves in conservation activities to qualify for the grant.

The grant becomes a revolving fund, where the group members loan each other.

Group chairman Bakari Nguvu, a veteran fisherman, says eco-credit helped the group expand their activities to mangrove restoration in addition to seaweed planting and harvesting what they used to do.

“Initially we were just doing seaweed, but when Comred introduced eco-credit, it gave us the motivation to get into mangrove planting,” he says.

The group has 27 members.

“Eco-credit money has conditions as you must involve yourself in beach cleaning, engage in planting of mangroves and educating other community members on the importance of conservation and matters climate change,” Nguvu says.

“The beauty of that loan is that we have set up the rules and we are going well. We started taking Sh3,000 and now we are taking Sh6,000. We have widows in our group and people who have kids in schools, and they use the money to pay school fees,” he says.

“Out of 27, 22 are women, and their husbands are fishermen. As the chairman and fisherman myself, I know if I plant mangroves I will get more fish.” 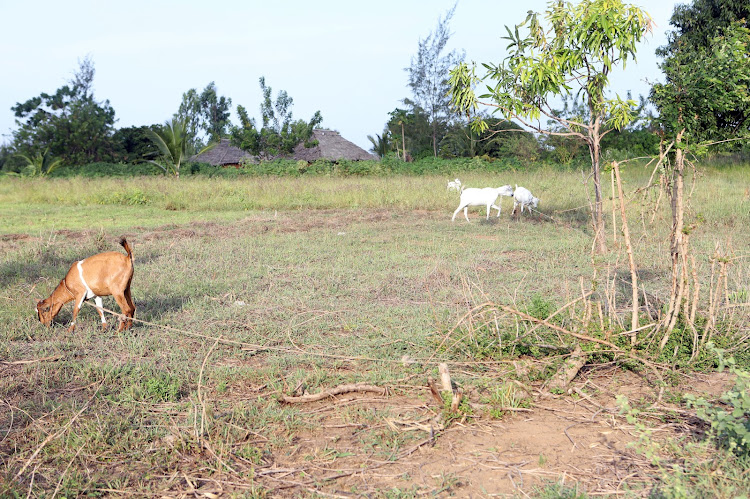 Shangani Self-Help Group operates near a beach, where most of the mangroves have been degraded.

Dried-up mangrove tree stumps dot the beach as some mangrove trees were fell while others had their roots cut and are drying up slowly.

Walking in the beach during low tide, Nguvu says fishermen looking for bait dig into the base mangrove, cutting the roots as they look for worms and other creatures.

The group is now helping to restore some of the patches left by dried-up mangroves, planting more than 70,000 seedlings.

Some seedlings are still in nurseries, while others have been transplanted.

“I started fishing in 1992, and I used to get more than 20 kilos a day. Now I hardly get 10 kilos,” he says as the United Nations Biodiversity Conference (COP 15) got underway hundreds of kilometres away in Montreal, Canada.

The conference, which ran from December 7-19, discussed global conservation, protection, restoration and sustainable management of biodiversity and ecosystems for the next decade.

The group also cleans the beach twice a week.

In Bodo village, still in Msambweni, Bodo Beach Management Unit (BMU) chairman Mohammed Mwangolo says for long, the group was engaging in conservation activities just as a hobby, but it got motivation after the onset of the eco-credit scheme.

“We got a new awakening because we didn’t see the benefits of conserving. But Comred came with a means to energise us to conserve the environment," Mwangolo says near mangrove nurseries for the BMU.

"More people joined the BMU because after planting mangrove sessions, we sit down to see who is pressed financially and we loan them some money.”

The chairman says 38 members of the BMU have benefited from the loans, with the first lot getting Sh8,000 and the second lot Sh15,000.

He says the organisation empowers them with knowledge on planting of mangroves and the need to conserve the environment.

“Before, we were doing farming activities and we didn’t have someone to follow us up and guide us and make sure we succeed. But with this eco-credit scheme, we are moving in the right direction,” he says.

“When other organisations come, they give us Sh1,000 or Sh500, so people just come to plant mangroves for those specific days when the organisation is coming, and they don’t come again until they visit again.

"But in this case, the eco-credit cash is with the group and we manage it and give it to those who abide by the conditions. So initially, people come for money. Now, they come for a conservation project.”

According to UN, mangroves protect coastlines from erosion and storm surge and provide food and shelter for a diverse array of wildlife and nursery habitats for commercially important fish and shellfish.

The UN Environment Programme estimates that global mangrove forests sequester within their roots, trunks and in the soil as much as 22.8 million tonnes of carbon each year.

“While they provide valuable services for people and the planet, mangroves are in trouble,” the UN writes in an article.

"Along with climate change impacts, such as rising sea levels and temperatures, mangrove forests are being depleted because their wood is valuable and prized by coastal communities as a prime source of timber for construction, fuel and even medicines."

Ibrahim Mshenga, one of the members of Bodo BMU, engaged in cutting down mangroves for sale for 30 years before the government imposed a ban on cutting mangroves.

“With my colleagues, we cut down mangroves until it was a desert in some places. We didn’t choose where to cut, we moved from village to village. We had no boundaries, you cut down the mangroves as much as your energy could allow you,” he says during an interview in one replanting exercise in the village.

With the loans, he says he has an alternative source of money. He got a loan of Sh15,000 from the BMU and paid school fees for his three children.

Comred director Patrick Kimani says the annual target for mangroves was 400,000, and so far, 224,000 seedlings have been raised in nursery in six months, while about 60,000 have been planted, translating to between 5 and 6 hectares. 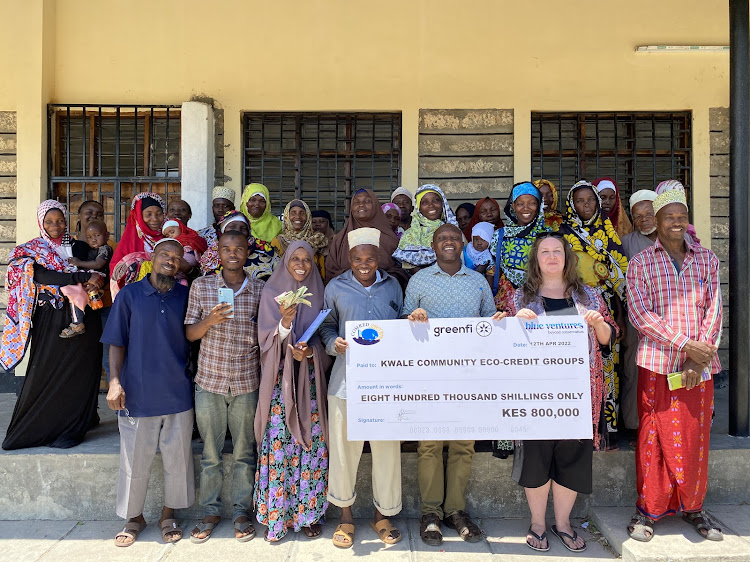 Mwangolo says to boost the accounts and increase their loan base, the BMU has used part of the grant to put up a fish business.

“We started the fish business with Sh40,000. After two months, we made more than Sh180,000, but this business has challenges because we don’t have cooling storage for the fish,” he says.

“We are also planning to set up beehives on mangrove forests next year. When we sell the honey, we buy the freezer or cooler box and other things. We want to use local resources to improve our economy as a community.”

He says with the loans, other members have bought cattle, motorbikes and others used the funds to pay fees for their children.

“Looking for money alone is tricky, but as a group, it’s easy to uplift ourselves,” Mwangolo says.

"The loans have no interest but there is a fine if you don’t pay in time. However, we don’t push each other hard to pay the loans, we give you enough time."

He says that his wife and himself took loans and each paid for fees for their two children.

Kimani says the community is benefiting in having a place where they can get a loan without prior savings, and because most groups were already doing conservation activities, the eco-credit scheme is an added value to be able to participate.

“We have seen a growth of between 20 and 90 per cent in some groups. Other groups are almost doubling the money we have given them,” he says.

The initiative is a pilot programme. The organisation gave Sh80,000 to 10 conservation groups, with plans to increase the fund and spread it to other areas.

“There are so many groups and we haven’t reached everyone. We want to scale wide, horizontally and deep by adding more money,” Kimani says.

"It's not just putting in money. Eco-credit project is itself a self-contained project in the sense that in there, we have financial inclusion, access to finance and conservation activities."

Kimani, a fisheries specialist, says the organisation is building capacity of skills for the community to grow their businesses when they get the loan.

“The groups are far from banks and don’t have capital. As opposed to other forms of community financing, which require a member to have some shares or savings, in eco-credit, you are given the money, the only condition is you engage in conservation and pay back to the group,” he says.

The organisation is also engaged in coral reef conservation in Mkwiro village in Wasini Island and other projects in Mombasa.

He says the major challenge for the organisation is getting sustainable, stable and unrestricted financing to generate more impact. Government enforcement is weak, and lack of rains is drying up seedlings, he adds. 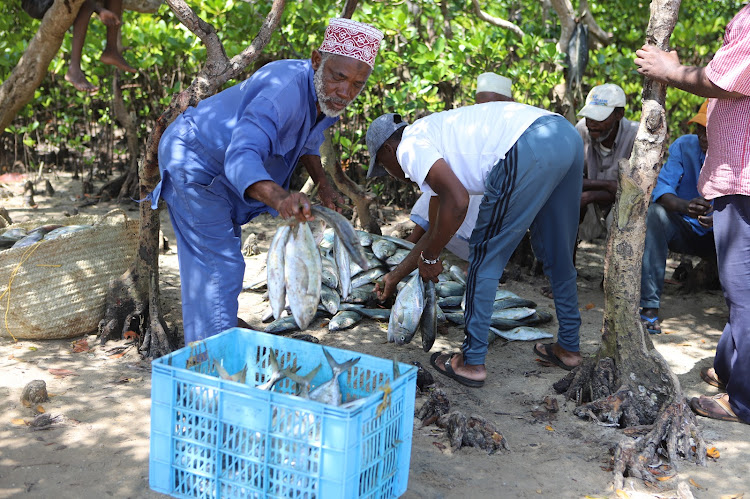