While their peers go to school, kids in Garissa, Wajir help at home with chores

• Boys have migrated in search of pasture, while girls cater to their younger siblings 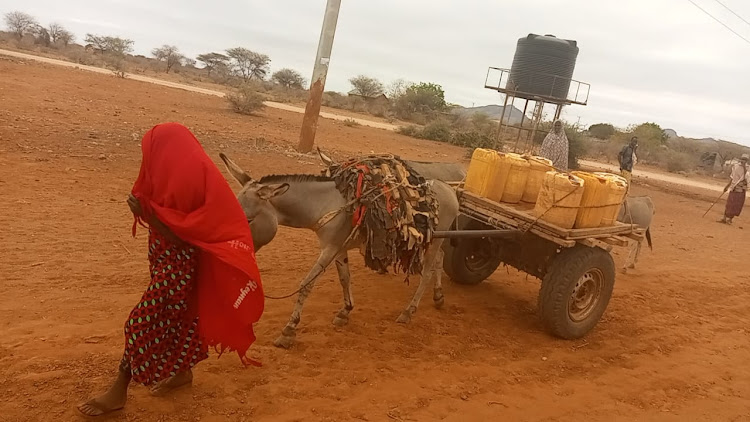 Six-year-old Farida* (not her real name) pushes a donkey cart on a dusty road at Masalale in Eldas, Wajir county. On it are eight jerricans full of water.

She looks tired and exhausted. She has been pulling the cart for kilometres in search of water.

Perhaps if it were not for the harsh circumstances, she would be in school like all her agemates.

But she has to stay at home and take care of her siblings after her father migrated with his goats in search of water and pasture due to the ongoing drought.

Her mother has been unwell, so she has to take up the chores: fetch water 4km away and take care of her three siblings, who are in school.

Her aunt, Fatima Asman, says they used to survive on donations from well-wishers, such as Save the Children, through cash transfer, but the help no longer comes. It is now six months.

In her compound are just two cows. They are so skinny, you can count the ribs. The dusty dry ground has nothing to offer them. No water either.

She is accompanied by her 10-year-old son. He is supposed to be in school, too, but has never been to any. He used to take care of the family goats until drought decimated them.

“I used to have a lot of goats but they died. A few that remained, my daughter has gone out to take care of them in the forest,” she says.

Her daughter, who is just seven years old, leaves the house as early as 6am and comes back in the evening. She, too, is supposed to be in school, but she dropped out.

Wajir is among the 23 counties worst hit by drought due to climate change, with data showing that at least 4.5 million Kenyans are affected by the ravaging drought and in dire need of relief food. 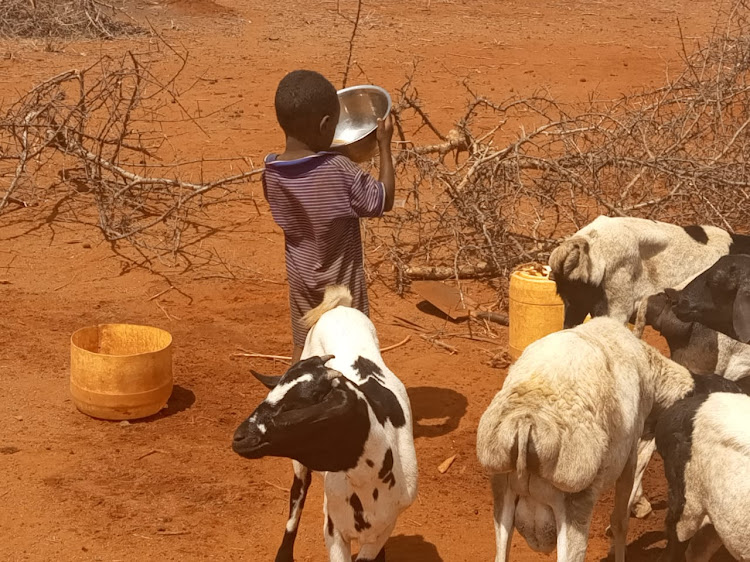 Kenya's drought is said to be the worst in 40 years. About 2.5 million livestock deaths have been reported in drought-stricken counties due to lack of vegetation and water.

In Lago, Garissa county, we meet Habiba, Ayan and Saudo. They can afford a smile despite the prevailing harsh climatic conditions.

The three girls dropped out of school in 2020. The irony is that Lago Primary School is a few metres away from their makeshift hut.

They have been forced to stay at home and take care of their siblings after their fathers moved in search of water and pasture.

The last time Saudo set her eyes on her father was nine months ago, when he left with their goats.

“We migrated to the neighbouring villages due to drought, I never went back to school. I have to take care of my siblings,” Saudo says.

“The school doesn’t have teachers either. The teachers were employed by the Boards of Management (BoM), but since the community does not have money to pay them, they left.”

Unlike Habiba and Saudo, Ayan doesn’t have hope of ever going back to class, but her dream is to be a teacher some day.

Even though she misses school and her friends, she says the situation cannot allow her to go back to school.

They can barely afford to eat. There is borehole water nearby, but the water is salty and they have to buy a 20-litre jerrican at Sh40, yet they cannot afford it.

Most of the animals have died and the few that are remaining can barely fetch them enough money in the market due to their emaciated state.

They hope things will change: teachers will be brought to the school to improve the quality of learning, more classrooms built and efforts made to ensure they have enough clean water and food to eat as well as feeds for animals. 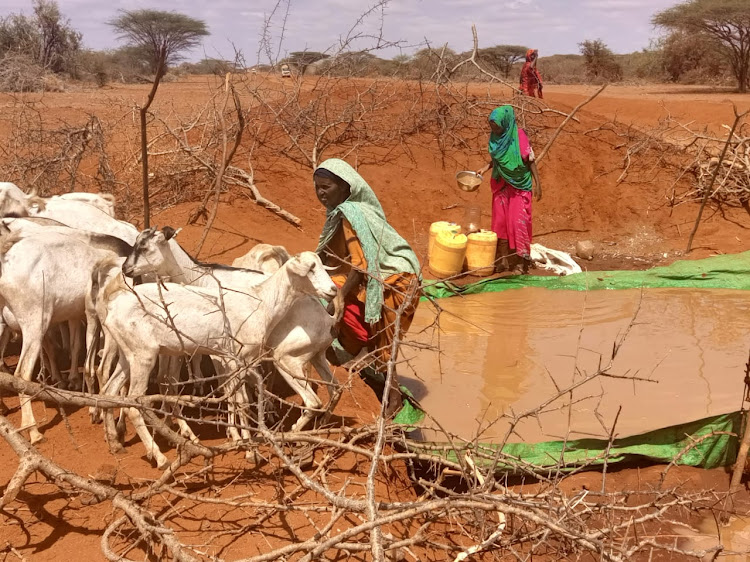 Women and girls share water donated by well-wishers in Garissa at a watering point with their animals
Image: MAGDALINE SAYA

At the nearby Lago Primary School, learning is going on. The school started in 2011 with more than 250 pupils, but less than 100 are left, with very few of them being girls.

Most boys migrated with their animals in search of pasture. Sugo Athman is among the few in school in the hot afternoon. Hit with the biting pangs of drought and hunger, he still has hope that one day, life will be better.

At the beginning of the year, there were 20 pupils in class, but currently, only six are remaining. Most of them have migrated to areas where there are no schools, killing their hopes of continuing with school.

“Before, we used to get food from donors, but that does not come anymore,” Athman says.

“We have no food, no water. We can’t sell our goats because we can’t raise enough money since some are even too weak to reach the market.”

The school has three teachers: two posted by TSC and one by the BoM. The non-local teachers either fled due to the constant insecurity in the area or nonpayment by the community.

More than 20km from Garissa town, we meet 13-year-old Suleiman at a water pan with his herd of goats.

He dropped out of school two years ago to take care of his family's goats with the help of his mother. He has been on the move in search of water and pasture. He is lucky to find a water point for the goats after a well-wisher refilled the water pan.

The water is dirty, but they have to share it with the goats to quench their thirst after several days of searching.

“It is not easy. At times when we are in the forest in search of water and pasture, the goats get diseases and die besides starvation,” he says.

Like other children, he would love to be in school, but he has to be in the woods.

Abubakar Noor, the head teacher at Kone Primary School in Balambala subcounty, says the school has been greatly affected by the ongoing drought.

The area has not been lucky to receive a single drop of water for the past four consecutive seasons.

The school has 264 pupils, eight classrooms and seven teachers: four posted by TSC, one hired by the county government of Garissa and two community teachers. The parents are supposed to pay Sh300 per month for the two teachers.

With just seven teachers for the eight classes, it means there is one class that will be without a teacher in every lesson.

“We pay the BoM teachers Sh10,000 monthly, and this money comes from the parents, and if the parents are not capable of paying this, then sometimes we do fundraising,” he says.

“Sometimes they wait two to three months, then we pay them something to sustain them.” 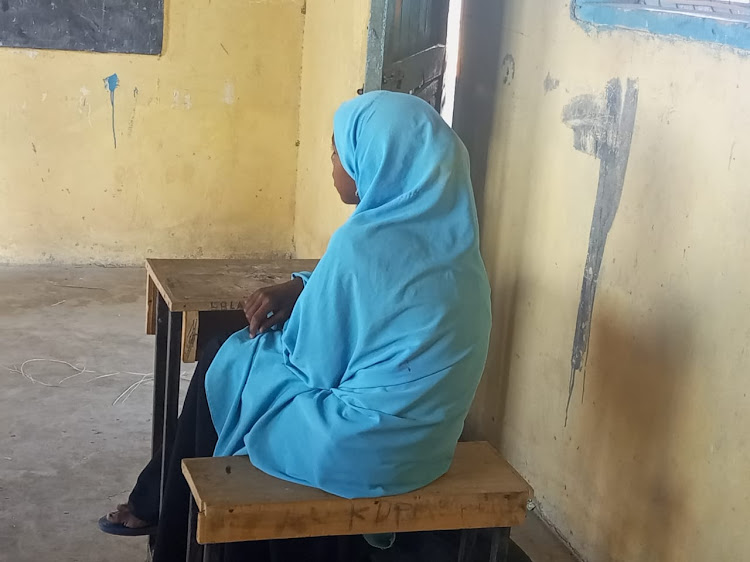 A girl in school at Lago Primary, Garissa county. Most pupils have dropped out of school in search for water and pasture for their goats as the drought continues to wreak havok in the country
Image: MAGDALINE SAYA

Most of the pupils are away and only come to school when there is relief food from the government. Some have migrated while others have been left to fend for themselves or under the care of relatives, who in most cases are not concerned about their welfare.

“We expect kids to come to school at around 6.30am or 7am, but the parents back at home tell them to go to faraway places where there is a water point to fetch water. They come to school very late, almost 9am, to 10am in the morning, so the lessons are being interrupted,” the teacher says.

“The most affected age is 7 to 10 years, Grade 3 to 6 because when they reach Class 7, the parents now get to know that the pupils will sit for the main exam, so the senior classes 7 and 8 have more pupils than the rest of the classes.”

Some girls are married off at an early age despite the effort by the government and the local leadership to keep them in school.

In most cases, it is done in so much secrecy to avoid the law catching up with them. This has made other girls scared of their future.

Life during the Covid-19 pandemic wasn’t easy either. With the area suffering from water scarcity, the virus containment measures, such as frequent hand-washing, remained a dream. Parents could not afford face masks either, making some children to share,” he says.

“This place is hot and you cannot wear the face mask and stay in class when you are sweating a lot, so it was a very hard time.”

Save the Children says the ongoing drought is set to most adversely affect children living in disadvantaged communities, who are already at a far greater risk of battling waterborne diseases, hunger and even facing death due to drought or floods.

Some children might even be hit by several disasters simultaneously or in quick succession, such as drought, floods and fires, exacerbating the effects even further.

Save the Children country director Yvonne says in recent times, the population in arid and semi-arid parts of Kenya has been struggling to cope with the impacts of climate change, which has triggered harsher and more frequent droughts.

“Our reports have shown the terrifying reality for this generation of Kenyan children and future ones if we don’t act now. Children in poorer counties will be the worst affected, but every child will feel the ravaging impact of this climate emergency,” Arunga says.

The UN, on the other hand, warns that women and girls are bearing the brunt of the worst drought experienced in Kenya in decades.

It notes that in some areas, more than 90 per cent of water sources have dried up and, as crops fail and families lose their livestock, which, for many, is their only source of income, more than four million people are grappling with acute hunger.

“It is usually women and girls who are sent to fetch water. Because of the drought, they have to walk even further and wait for hours at boreholes,” the UN says.

This, the UN says, puts them at greater risk of violence, at a time when hostilities among communities desperate to secure scarce resources are mounting.

With hundreds of thousands of Kenyans forced to move in search of survival, it adds, vulnerable women and girls have little to no access to critical health facilities or protection and support services, at the very time they need them the most.

One boy's fight to save his family from starvation

He is wearing his only shirt and trousers, and clutching his one other possession - a new schoolbook.
News
2 weeks ago

Will support the government in providing long term solutions to the drought crisis.
Business
2 weeks ago
Post a comment
WATCH: The latest videos from the Star
by MAGDALINE SAYA REPORTER
Big Read
23 November 2022 - 05:00
Read The E-Paper