• However, attempts to rally global unity ring hollow in absence of biggest polluters 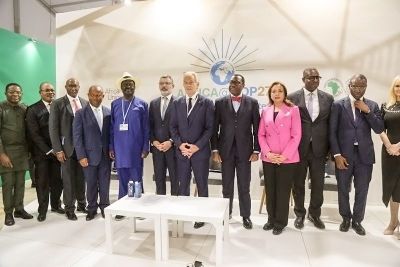 Ambitious new efforts are also underway to lower the carbon footprint in cement manufacturing in Africa on the back of population growth fuelling demand for housing, schools and roads.

All these efforts are happening without the involvement and thus commitment of the world's biggest polluters, calling to question how effective they will be.

Fossil fuel firms are facing renewed pressure to open their wallets – fattened by the global energy crisis – and pour revenues into building renewable energy industries in states hit hardest by the fallout from climate change.

According to estimates by the International Monetary Fund, the surge in fossil fuel prices has generated substantial windfall profits in the energy sector and lined the pockets of fossil fuel producers and their shareholders.

"I am asking that governments tax the windfall profits of fossil fuel companies. Let us redirect that money to people struggling from rising food and energy prices and to countries suffering losses and damages caused by the climate crises." He reminded heavy polluters that "time is running out" and that a roadmap to speedy execution is crucial.

His calls were backed by 350 Africa, a grassroots programme that seeks to stop the extraction of fossil fuels in Africa, and now wants such taxes levied on these companies to build sustainable energy systems in countries ravaged by polluters' emissions.

Africa is among the globe's worst-affected regions regarding climate change – a particularly galling fact given that the continent accounts for less than 6 per cent of global energy consumption and just 2 per cent of cumulative global emissions.

"We need to keep fossil fuels underground in Africa and hold those responsible for loss and damage to account," 350 regional organiser Christian Houndjonousse said, emphasising that states like Nigeria had already lost crucial adaptation time.

Implementing a polluters' tax would be key to unlocking existing barriers to African nations' clean energy transition plans; it would give countries on the continent access to much-needed financial support to produce, use and export clean energy as part of a green energy drive.

Africa is well placed for these processes. Scientific research has proved that the continent has tremendous latent solar and wind power, and its soils contain many minerals needed for clean energy technologies.

Such a tax would also allow many African countries to bypass traditional fuels and infrastructure and go straight to building sustainable energy systems. This would be a boon, particularly in places whose grid infrastructure, designed to accommodate conventional energy sources, is inadequate, leading to frequent power losses and low supply quality.

The renewed drive for a polluters' tax could now force policymakers and tax experts in many countries to rapidly develop policies that would tax part of such companies' profits without discouraging investment.

The IMF has previously stated: "Many fossil fuel-producing countries already have an adequate rent-capturing fiscal instrument in place. Others may consider introducing a permanent tax on windfall profits from fossil fuel extraction but should be more cautious about temporary and possibly poorly designed windfall profit taxes."

THE PLAN FOR CEMENT

Governments representing two-thirds of the global GDP are targeting five carbon-intensive sectors to limit emissions, including cement production, with a new package of 25 collaborative actions.

The package will be delivered by COP 28 and covers power, road transport, steel, hydrogen and agriculture, designed to help cut energy costs and guarantee a just transition with green jobs.

With emissions from the continent’s infrastructure sector expected to rise, COP 27 has also unveiled the Africa Net Zero Concrete Group to help green the construction supply chains, with cement as a top priority.

This will include the widespread adoption of carbon capture schemes in the cement industry across Africa –– its utilisation and storage –– fast-tracked under the UN Breakthrough Agenda.

“Since we launched the Breakthrough Agenda at COP 26, the world has changed and we are facing a perilous geopolitical and economic situation. That only makes international collaboration more urgent,” said Alok Sharma, COP 26 President.

“That’s why I am pleased that countries representing over 50 per cent of global GDP have now agreed to a set of priority actions for implementation. Now, it is vital for all to deliver and demonstrate real progress as we move forward. This is integral to achieving the 2030 goal of making clean technology affordable, available and accessible to all.”

Cement and concrete are joining the First Movers Coalition (FMC) at the ongoing COP 27 just months after the aluminium industry joined the shipping, steel, trucking and aviation sectors at the World Economic Forum in Davos.

FMC was set up to help drive industrial decarbonisation and has expanded to 10 new corporate members, including PepsiCo, General Motors, Rio Tinto and ETEX, to reach 65 in total with a combined market cap of about US$8 trillion.

Together, they commit US$12 billion to commercialise zero-carbon technology to decarbonise the heavy industry and long-distance transport sectors, responsible for 30 per cent of global emissions.

The coalition provides demand signals through advance market commitments to climate tech firms, giving investors in those technologies more certainty they will be able to scale commercially.

In a win for the planet, more companies are committing to purchase at least 10 per cent of near-zero carbon cement and concrete annually by 2030.

Cement is the second most-used product on earth after water and is responsible for about 7 per cent of global emissions, so this is a big deal. First movers pledged to purchase at least 10 per cent near zero carbon cement and concrete by 2030.

Already, cement manufacturers in Africa are planning to deploy clean technologies and tap into clean energy to power their production.

In March, a Danish multinational engineering company agreed to provide Ghana with its advanced equipment in a push to reformulate cement processes in Africa.

Two Scandanavian funds have injected $27.9 million into the project, which is being initiated by Continental Blue Investments Ghana (CBI).

The advanced manufacturing technique uses calcined clay (clay combined with limestone and other materials), or LC3, in place of traditional “Portland cement” clinker, an intermediate product in the cement manufacturing process. LC3, which has a far lighter carbon footprint, can replace up to 90 per cent of the clinker using the new technique.

FLSmidth said it would supply Ghana with equipment that uses natural calcined clays as the main constituent in cement instead of clinker.

The announcement came after the Danish Investeringsfonden for Udviklingslande (IFU) and Norwegian Norfund provided financing. CBI is a significant producer of cement in Ghana, operating a 550,000-tons-per-annum facility outside Accra.

New investments into CBI will see the plant almost triple its production to 1.4 metric tons annually.

The use of calcined clays as the main constituent in cement is a game-changer, especially in Africa, which is witnessing rapid urbanisation and a construction boom. The École Polytechnique Fédérale de Lausanne developed the new technique with the Indian Institute of Technology Delhi, IIT-Bombay, Technology and Action for Rural Development, IIT-Madras, and the Central University of Las Villas.

One of the great benefits of calcined clay is that it activates at a much lower temperature than required to make clinker, with temperatures of 750-850˚C required instead of 1400 – 1500˚C. It is also less energy intensive and costly to grind and handle. Some reports state that the use of LC3 could lower the carbon footprint of production by 30 to 40 per cent.

The use of traditional, or Portland, cement in concrete for construction today accounts for 7-8 per cent of the world’s CO2 emissions.

Post a comment
WATCH: The latest videos from the Star
by Steve Umidha and Seth Onyango for bird story agency
Big Read
15 November 2022 - 05:00
Read The E-Paper