Through the initiative, Jane was taught carpentry which is her current source of income. 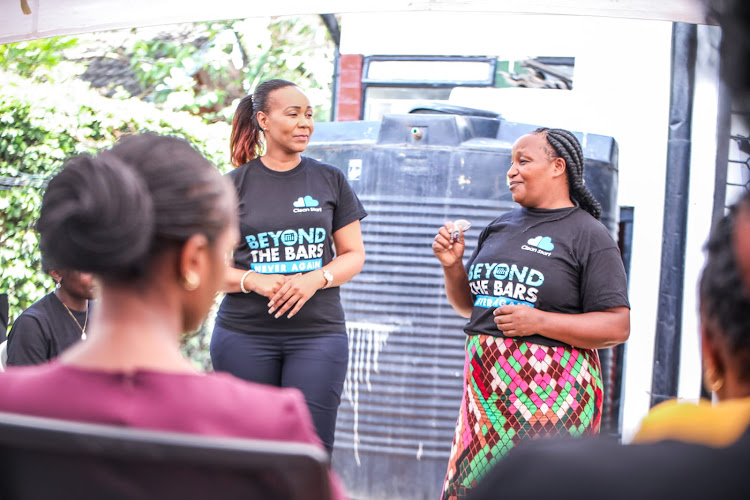 Jane Kiio with Clean Start CEO Teresa Njoroge speaking at the launch of a safehouse in Kileleshwa on Friday November 11
Image: CLEAN START

Jane Kiio, 52, says her friends led her to destruction.

She was a newspaper vendor but had friends in high places, bank managers and hacking gurus.

They would call her from time to time to help them with their activities until she was caught in 2012.

The task given was simple, to go to a bank with fake identification documents and open an account, which would, later on, be used to request a loan that would remain unpaid.  

At the bank, the teller noticed they had another client with the same details but the face did not match the one in the system. So, she raised alarm. And that is how Jane was nabbed.

Speaking to the Star, Jane said when she got to Lang’ata Women’s prison and her experience was dehumanizing.

She said the tone used is ever condescending with the intent to ridicule.

She, however, said the women are good to each other.

Jane said the food was demoralizing both in quantity and quality, but it was all there was, and they scrambled for it.

This loosely translates to, “Food is the biggest disease, You are given a tiny slice of ugali with some little kale soup and we used to scramble for it. Later on, it was changed, and they started frying the kales.”

When Jane went to prison, she left behind three children but luckily, her eldest daughter was already married.

It was the two younger ones that bore the brunt of her imprisonment.

Her son was in his final year in high school and her daughter was in Std 6.

Jane said before she was released, she sent a letter to her children apologizing for leaving them to fend for themselves.

Jane's imprisonment saw her son get involved in criminal activities, to provide for his younger sister, as he also tried to raise money to pay her fine.

This, she says broke her heart.

How she got out is a miracle in itself, Jane said.

She said a priest from China came to visit their prison and helped her get out, but on condition that Jane would spread the word that Kenyans going to China should not carry any drugs because once arrested, it comes with death penalty.

"The priest from Hong Kong had come to deliver a message to families of those doomed for execution in China over drug trafficking. A message that they would never see their loved ones again," she said.

Upon her release, Jane was informed that her kids still lived in their Kibra home. She could feel their suffering over the time she was locked up.

She took it upon herself to counsel her son against crime and he was willing to take up a driving course. He became a matatu driver stepping away from crime.

Jane said she was grateful that her daughter was largely helped by her school when she joined secondary school, where she was provided with food items and pocket money.

The mother of three went back to newspaper vending to earn a living and while at it, Jane heard a friend of hers was supposed to take a test to join the Ufunuo training programme under Clean Start Initiative.

Though not invited, she accompanied her friend, passed the test and became a member of the Clean Start Initiative.

Through the initiative, she went through the programme where formerly incarcerated women are taught skills, they can use to earn a living.

Jane was taught carpentry which is her current source of income.

Ufunuo also counsels' women to help them forgive themselves, heal and accept their new lives.

Clean Start Kenya CEO Teresa Njoroge says most incarcerated women feel stigmatized once they get out of prison.

"Our aim is to bridge the gap between prison and the community by ensuring the women and children leaving prison are successfully integrated back into society," Teresa said.

Jane said that the Clean Start Initiative has helped her by putting her in a space where she is understood by those around her, owing to the fact they share a common experience.

Clean Start targets to empower up to a million women.
News
2 weeks ago
Post a comment
WATCH: The latest videos from the Star
by LINDWE DANFLOW
Big Read
14 November 2022 - 10:24
Read The E-Paper