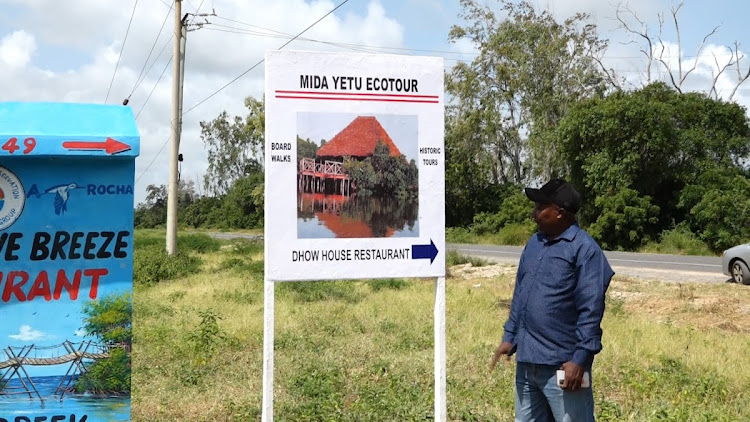 The National Museums of Kenya has been conducting a case study at Mida Creek on cultural heritage, and is instrumental in supporting the community initiatives with a view to transforming lives.

The government institution is keen to promote marine and underwater cultural heritage within the Mida creek, which has an ancient history that requires to be conserved.

Caesar Bita, an underwater archaeologist from the National Museum of Kenya, said their aim is to help develop cultural heritage.

He said the project is called Maritime and Underwater Cultural Heritage (MUCH) in Mida Creek. It came about through the National Museums of Kenya, being the institutions that use cultural heritage.

Bita said they got support and funding from the UK's Rising from the Depth project, which funds projects across the oceans in Eastern Africa.

He said they worked with the local community in Mida and a women's group to be specific, where they decided on the project they felt they want and could sustain and manage themselves.

The underwater archaeologists came up with many ideas, including beekeeping, butterfly farming and ecotourism. They came up with a research component to document what sorts of cultural heritage exist in Mida Creek.

In the research, he said, they found a number of historical sites, including Kirepwe Monument, Chafisi Magangani, Sita and Shaka Ruins.

“NMK has Kipepeo project in Gede, and being so close to Gede in Mida, the butterfly project was so much feasible as the women could access butterfly pupae from Arabuko Sokoke and get a ready market, which is one of the most successful projects,” Bita said.

He said the project also came as a result of a research after finding out that Kirepwe Island, which is a national monument, must have had a lot of international connections.

From historical research, they established that the Arabuko Sokoke forest was also a source of timbre for making boats.

To him, traditional boat making in Mida creek was very pronounced many years ago, and there are local craftsmen who make the boats and canoes in Mida Creek.

He said the trees for making canoes and boats are also available within the creek.

“The creek is not so deep to allow large vessels in, so canoes are the only means of transport within," he said.

"So we built some canoes for the women's groups and today, the canoes are being used for taking tourists into the creeks and channels in the creek."

He said the project has opened up employment for youth and women within the creek.

Bita said they also set up an information centre from the research done and documented the findings, which were set up as an exhibition in the restaurant.

Others are organic farming and traditional fishing methods, where they made basket fishing traps.

He said the women can now pay school fees and medical costs for their families, and are planning to come up with livestock farming projects.

In Mida Creek, the sea rising has had a negative impact due to deforestation that has led to erosion.

To address that, the women developed mangroves for sale and rehabilitated the affected area.

They have restored more than 10 acres of mangrove forest and with support from Kefri, raised more than Sh800,000 for local groups.

Bita says as one of the blue economy projects in the country, it is a success story NMK can be proud of as an institution.

Further, the communities are  now understanding the value of conserving maritime cultural heritage, which is a new project, a new idea.