The lonely fight to save Indian Ocean from litter

Volunteer groups are up against public indifference and government inaction

• No sooner are beaches cleaned than they are littered, calling for awareness creation 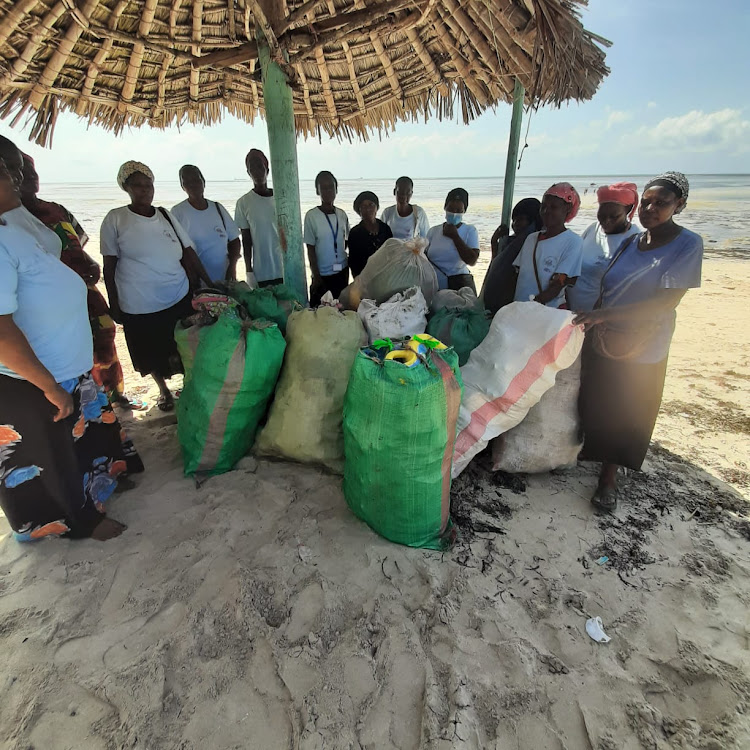 Frustrated with the government’s lack of initiative in enforcing Kenya’s 2020 single-use plastic ban, volunteer litter groups on the Indian Ocean coastline are assuming the burden of tackling marine plastic pollution, which is endangering their livelihoods.

Volunteer groups regularly gather to clean up, but their efforts are frustrated by a lack of goodwill from the public and support from the government.

“We can collect plastics this Saturday, when we go back next weekend we find different kinds of litter, like flip-flops,” says Esther Renchi from Likoni Women Hope and Eco.

“I think society hasn’t understood the importance of keeping the environment clean.”

According to the 2021-30 National Marine Litter Management Action Plan prepared by the Environment ministry and Nema, Kenya’s coastal and marine ecosystems are valued at more than $4.4 billion annually.

“The coastal and marine ecosystems continue to face huge pressure from natural and human activities, such as climate change, resource overexploitation, habitat destruction and pollution,” the plan reads.

“Marine litter pollution compounds the existing pressures with adverse implications on the integrity of the coastal and marine ecosystems.”

Despite Kenya banning single-use plastics in 2020, many traders continue to sell water and refreshments in plastic bottles along the beach. 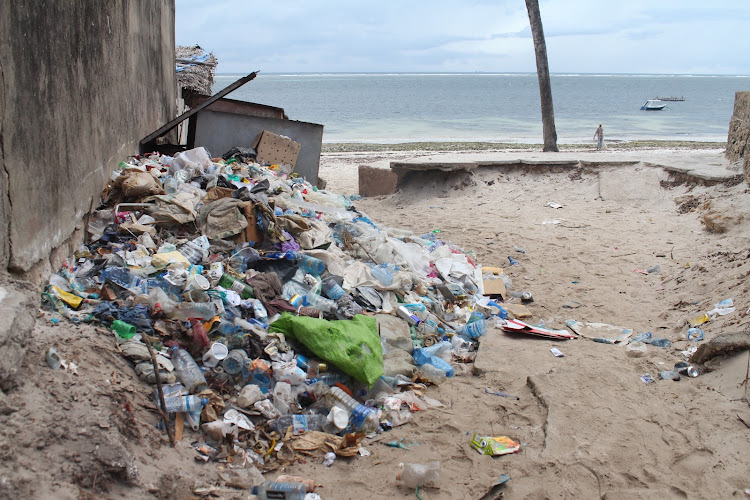 Trash including polythene and plastics at the entrance of Mombasa beach, Mombasa county, on April 12
Image: ANDREW KASUKU

A United Nations Environment Programme (Unep) 2018 Africa report on waste management shows the total mismanaged plastic in Africa stood at 4.4 million tonnes in 2010 (out of 32 million tonnes globally) and could reach 10.5 million tonnes by 2025 if the current trends continue.

The report further shows Kenya’s level of mismanaged plastic that finds its way into the Indian Ocean is set to exceed 100,000 tonnes per year in the business-as-usual scenarios.

Along the coastline, citizens decided to take matters into their own hands by volunteering their time to rid beaches of litter along the coastal strip.

On the popular Nyali beach in Mombasa, an informal structure called ‘Early Birds Banda’ sits at one of the entrances of the beach.

Home to swimmers and fitness enthusiasts, visitors gather at the centre to have tea after morning sessions as they exchange ideas on different issues.

“When we started, we were just four people,” Early Birds Banda founder Abeid Hamud said in an interview at the beach, which looks clean.

“It used to be a place where people just gather to jog and share ideas. Guys come here now for cardio exercises, swimming and weightlifting. But after all this, we collect litter before leaving.” 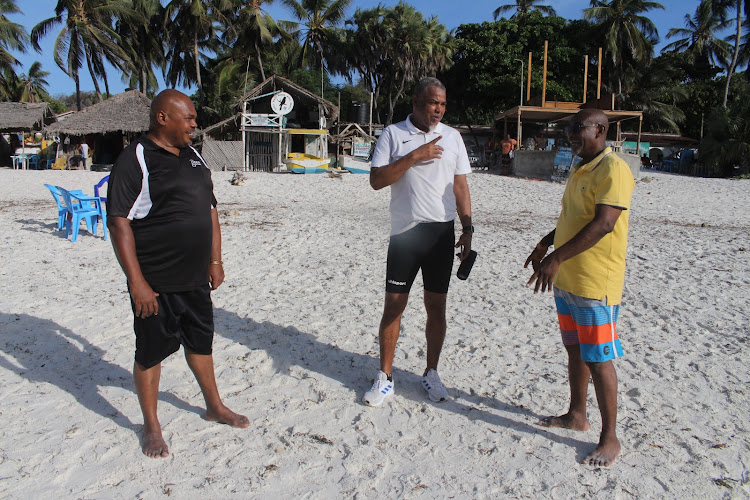 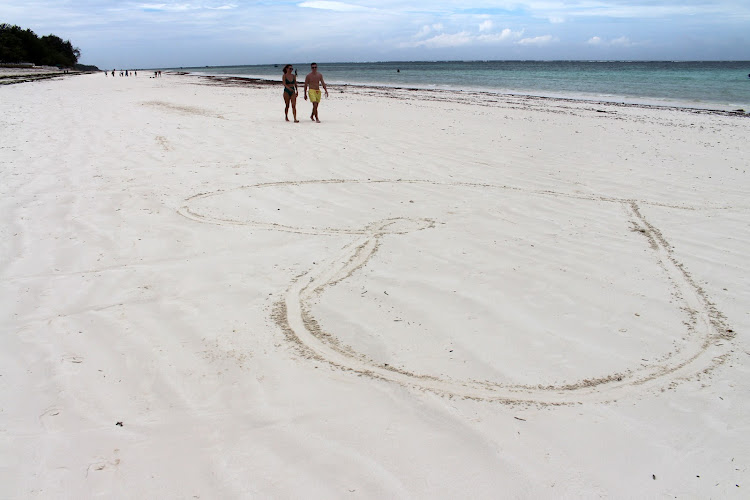 We can collect plastics this Saturday, when we go back next weekend we find different kinds of litter, like flip-flops. Society hasn’t understood the importance of keeping the environment clean

As you enter the beach, you are welcomed by signboards warning you of littering the beach.

The signs hanging on walls and trees at the entrance indicate what the centre that started seven years ago has evolved to be: an ocean conservation point.

Early Birds Banda has become the meeting point for beach cleanups during major international days, such as World Ocean Day.

Hamud’s centre also organises its own beach cleaning activities for schoolchildren, organisations and government organisations periodically, efforts that earned him an Honorary Warden Award from the Kenya Wildlife Service (KWS) in 2020.

“One time we got 1.6 tonnes of trash during a cleanup. We are trying to talk to tube renters, cameramen and fishermen, boat owners to help us,” he says.

In Likoni subcounty, about 10km away, on the mainland part of Mombasa bordering Kwale county, a group of 20 single women called Likoni Women Hope and Eco are helping keep the only public beach in the area clean.

The group started in October 2021, has so far collected 2.8 tonnes of plastic litter from the ocean shores, according to its founder and chairwoman Esther Renchi.

She and her friends discussed the state of the environment and decided to begin cleaning the beach that is closer to them.

“Since last year, we have collected at the same place, but the litter doesn’t end,” Renchi says during an interview at a semi-abandoned house building filled with collected litter, which doubles as her house. 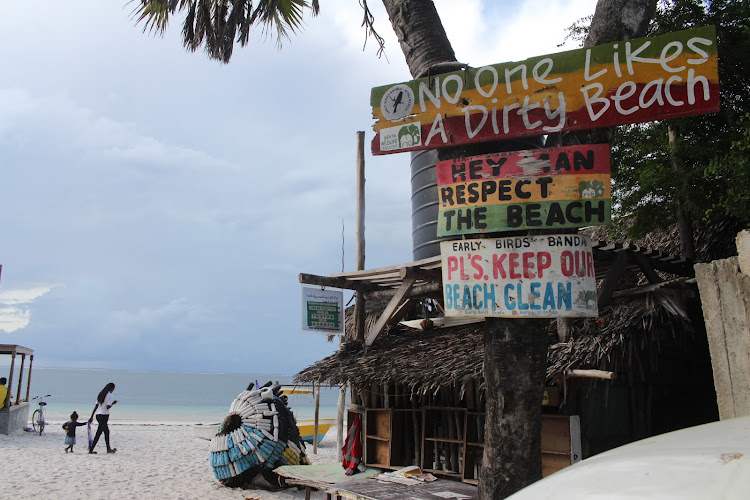 Renchi says all the women are single mothers, having been divorced or widowed. Only three are employed, hence they seek a market to sell the plastics collected, which has proved to be a challenge.

At Makupa creek, which joins Mvita and Changamwe subcounties in Mombasa, fishermen say fish catch has declined over the years.

An elderly fisherman, who prefers not to mention his name, says he has been in the trade for 40 years and his catch has plummeted from 50kg a day to just five, if he’s lucky.

“Ocean littering is too much, and nobody comes to monitor. People are cutting down mangroves and filling the shore and building structures. We have seen journalists write about it, but authorities have not taken it up. It’s so difficult to fish here nowadays,” he says with frustration.

He says many years ago, it didn’t take long to catch the fish he needed to make a living. But nowadays, even staying in the waters for hours doesn’t guarantee a meaningful catch.

“Why can’t the government make sure the environment is clean for fish to thrive?” he asks.

Next to him are other fishermen sleeping under a shade with their nets. There is no motivation to launch fishing trips as they net very little out at sea.

Marine litter injures and kills marine life, interferes with navigation safety and poses a threat to human health, according to the Nema 2017 State of Coast Report for Kenya.

Fishers shun easy money to save turtles in Watamu

There is little I can do because I buy when the water is already packaged. If the government can make sure there is alternative packaging, it can make a difference

A report by Kemfri, ‘Microplastics Pollution in Coastal Nearshore Surface’, found the presence of microplastics in coastal nearshore waters of Vanga in Kwale county, Mombasa, Malindi in Kilifi county and Lamu.

In Kwale, other volunteer groups have helped conserve turtles, which are poached for meat and a local myth that their soup improves libido.

On July 8, volunteers and team members of Diani Turtle Watch (DTW), an organisation that works to save turtles in the South Coast, rescued and released a green turtle that had been accidentally caught in the fisherman’s net.

In July, Local Ocean Conservation (LOC), a private organisation that works in partnership with DTW to protect Kenya’s marine environment in South and North Coast, posted on its Facebook page that its Rescue and Release Programme has implemented more than 22,200 such releases.

According to DTW project manager Dempsey Mai, surveys by Olive Ridley Project showed that to date, there are 86 hawksbill turtles and 685 green turtles in South Coast.

“Community members and volunteers are very key because we want to instil the idea of, hey, we need to conserve our beaches, and it's we who have littered it, and it's upon us to ensure it is clean at the end of the day,” Mai says.

All the groups decried a lack of resources, including safety gear like gumboots, gloves, litter bins and proper ways of disposing of the litter.

Efforts to get comments on ocean conservation from Mombasa Environment executive Godfrey Nato and his Kwale counterpart Saumu Beja were futile as texts and calls went unanswered. 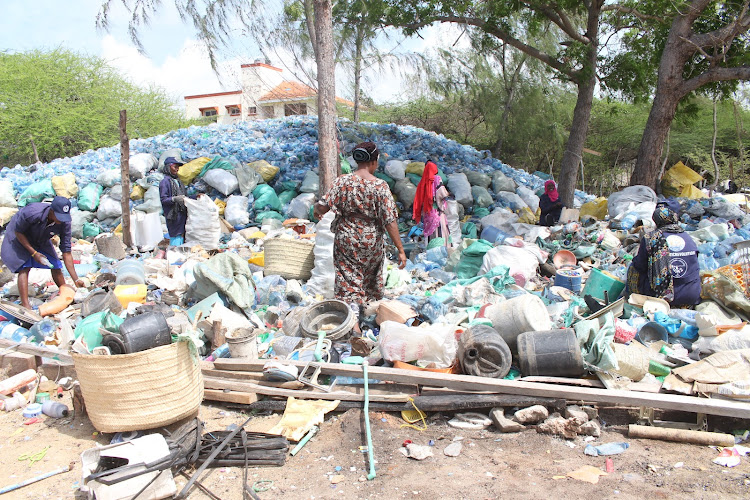 “Apart from killing wildlife, it brings complaints from members of the public when they come and find beaches dirty because they know it is us who are in charge of cleaning,” he says.

James Odindo, who has been hawking water and juice along the beaches for two years, says despite being aware of the plastic littering, “There is little I can do because I buy when the water is already packaged. If the government can make sure there is alternative packaging, it can make a difference.”

The volunteers hope that as they help to secure marine life by keeping beaches clean, more people will be motivated and become self-aware to conserve the environment.

This story was produced with support from Internews’ Earth Journalism Network

How Flipflopi is turning the plastic pollution tide
Post a comment
WATCH: The latest videos from the Star
by ANDREW KASUKU Photojournalist/Writer
Big Read
28 July 2022 - 05:00
Read The E-Paper