Fishers shun easy money to save turtles in Watamu

The animals are much sought for libido, medicine and ornaments 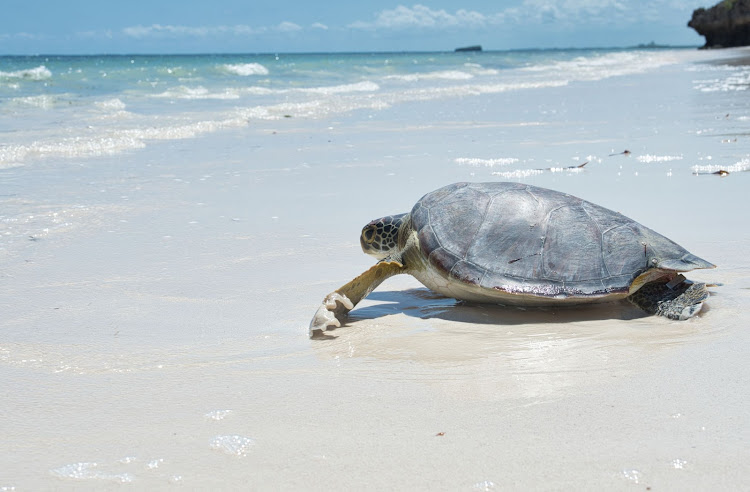 Rescued turtle swims back to the ocean
Image: COURTESY

Ocean turtles are endangered species, especially at the Kenyan Coast, where their meat is a delicacy. Turtle meat is believed to increase libido, especially in men.

Aside from the “bedroom” shenanigans, the animal is also believed to produce oil, which has medicinal value as well its shell being used to make decorations and ornaments.

Kenya’s Coast prides in being host to some turtle species, which include green turtle, hawksbill and olive ridleys.

However, their numbers have dwindled due to poaching. Despite the constitution outlawing poaching or consuming of turtle meat, many fishermen deliberately go fishing for turtle due to its monetary value.

Diseases and accidents from boat propellers also decimate turtles. As does infrastructural development alongside the ocean line, such as ports.

To turn the tide in Watamu, residents, in partnership with an NGO, have taken up a community initiative to protect and conserve turtles and the habitat.

Years ago, marine lovers would find beaches filled with shells from turtles, meaning the species had been killed and their meat taken away.

A few individuals came together to start an organisation, Local Ocean Conservation (LOC), with the aim of saving and rehabilitating turtles.

LOC set up a centre, which also serves as a turtle clinic, where turtles rescued are treated to recovery before they are rehabilitated back to the ocean. The clinic can hold 11 patients and can also host turtles diagnosed with cancer.

As an incentive to fishers, it pays them Sh2,000 for every turtle recovery they call in.

During our tour, the clinic had a turtle patient who was recovering from a back injury caused by a poacher.

Pole has been at the centre for the past three months but with treatment, her situation has gotten better and she is expected to be taken back to the water soon.

The centre also serves as a data collection point where turtles rescued are taken, assessed and tagged for easy monitoring.

After the assessment, they are either admitted depending on their health situation or taken back to the water if they have not incurred any injury.

Rajabu Katana, a fisherman, is one of the people who have chosen to save turtles instead of preying on them.

Katana had just rescued a fourth turtle in a week when he called in at the turtle centre.

He said they had accidentally caught the turtle while fishing but the turtle had not suffered any injuries.

“This is a fourth turtle we are rescuing in two days. It is normal for us to catch these animals but because it is not intentional, we always surrender them to LOC,” he said.

The fishers were educated on the need to protect the turtles. They learned that the turtles need to exist to maintain the marine ecosystem among the ocean species.

Turtles are also an important source of income for Coastal residents through turtle-watching ecotourism. Sea turtle ecotourism can generate three times the income than by selling its eggs, meat and shells, making them worth more alive than dead.

Katana said prior to the civic education, the animal would have landed on their plates or been sold off.

“It is not about the incentives given by LOC, it is about doing the right thing. If it were about money, then I would have chosen to sell it since it would bring me more money,” he said.

After examination, the crew from LOC ascertained that the turtle was fine and it was safe for it be returned back to the ocean.

In return, LOC gives them some incentive to appreciate their efforts to conserve the lives of these endangered ocean species.

It is not about the incentives given by LOC, it is about doing the right thing. If it were about money, then I would have chosen to sell the turtle since it would bring me more money

Justin Beswick said when they started operations at LOC decades ago, even though their efforts were successful, there was still a gap in how to involve the community.

After much consultation, it was evident that the organisation’s idea was not going to materialise without the help of the locals, especially fishermen.

Kahindi Changawa, who has worked with LOC since 1997, said the crew would recover turtle shells lying all over the beaches.

After a research, it was discovered that residents were poaching the ocean turtles, making them endangered species.

“When we met the locals, they were willing to collaborate with us. However, as a way of encouraging the organisation-community partnership, we resolved to give incentives to people who rescue stranded turtles,” he said.

As a result, the alliance has reduced cases of poaching as locals have turned to turtle “activists”, who go out of their way to stop any harm against them.

The locals, especially fishermen, ensure they rescue turtles who are stranded or save those who are hurt by human activities, such as fishing boats.

At least 150 turtles are rescued monthly. LOC is able to track the turtles using special tags, which are pinned on them when they are initially rescued.

The fishers have also ventured into using safe fishing methods, which ensure turtles are not among their daily catch.

They also serve as a community police for poachers, whereby they share intelligence on fishermen who poach turtles.

As a result, the numbers of these ocean species have stabilised.

However, turtles are losing their nesting grounds alongside the beaches as a result of Coastal development, climate change and pollution.

Most of the beaches where turtles lay eggs are either being developed with infrastructure, such as ports, or are filled with trash, such as plastics bags.

And as LOC works to ensure the conservation of turtles, it is evident that there are still gaps in how communities and organisations can partner to ensure success in this fight.

These include lack of harmonised data on the turtles, use of technology as well as a long-lasting solution to the problem.

It is to bridge these gaps and bring in much-needed changes in the marine sector that the African Marine Conservation Leadership Programme was born.

The project was launched by British conservation firm Blue Ventures in partnership with conservation specialists Maliasili. It aims to mould and develop a new generation of African ocean change makers.

They aim to transform the capabilities of organisations working in Coastal areas by identifying needs and gaps on conservation and training participants on how to tailor-make their own solutions.

The programme assesses the needs of local organisations across the targeted countries and provides training, knowledge exchanges and information sharing platforms. Participants are drawn from Kenya, Tanzania, Comoros and Somalia.

The programme has been an eye-opener to the participants, especially due to information and strategy sharing skills.

This has made most of the organisations go back to the drawing back and realign their strategies with alternative income generation for their communities, sustainable fishing practices, ecotourism and environmental sustainability.

Beswick said the programme has enabled them to think of setting up long-term solutions to some of their problems, such as coming up with alternative ways of how locals could earn more from their fishing activities while maintaining environmental standards.

They plan to initiate signing of bylaws between LOC, communities, BMUs and government that will give their conservation a legal framework.

“The leadership programme has given conservation a whole new angle. We plan to integrate all information we received from other participants to come up with long-term strategies,” Beswick said.

With Kenya lacking concrete data on turtles, Muejes, who previously worked in Comoros, said they intend to use technology to collect data on turtles.

She said conservation organisations need to work together to come up with a workable formula on how to have joint data.