• Up to 200 camels have been identified, treated and trained to be mission-ready 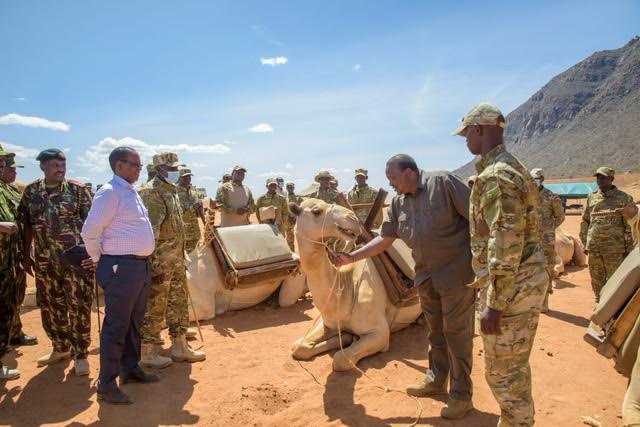 President Uhuru Kenyatta embraces a camel during the launch of the Camel Calvary Team in Isiolo on July 14
Image: HANDOUT

For the past decade, the menace of attacks using Improvised Explosive Devices in some parts of the country has been devastating.

And it is not clear how long it would take to address the menace for now with a long porous border on the Kenya-Somalia border and ongoing insecurity in the neighbouring country.

With the ongoing war in Ukraine, officials fear the weapons being dropped there, including bombs, may find their way to Somalia and Kenya.

As part of efforts to address insecurity in the area, for the past three years, the process of identifying and training dozens of camels has been ongoing in various environments in the country.

The aim was to harden and adapt them to various scenarios.

Up to 200 camels have been identified, treated and trained to be mission-ready.

The animals were among others trained to detect explosives far away and alert the riders.

And their prowess was showcased in Isiolo county on July 14, when President Uhuru Kenyatta commissioned the Camel Calvary Team, which is a new breed in the police animals.

The team has been trained in various places, including low and high altitudes and dry ones, to help them adapt to any conditions.

Just like police dogs and horses, the camels will now be regarded as a special breed and be given names, ranks and attention.

“In the service, police dogs are given even ranks. This will happen in this case of the camels as part of efforts of getting the best out of them,” said an official aware of the plans.

Kirinyaga, where oxen are beasts of burden

With proper training, the camels are intelligent to help us in many ways in different environments. We are hopeful for the best results

Today, many armies in the Islamic world maintain camel cavalry units for parades and ceremonies.

In Kenya, apart from detection of explosives, they will be used for supplies.

Many of the targeted areas are far away and need mostly choppers to drop supplies like food, weapons and money for operations.

Camels, like horses, have been used in warfare for centuries. Their ability to carry heavy loads and go for days without water makes them ideally suited for patrol and transport work in these areas, said a veterinarian assigned to take care of the animals.

He added that horses, elephants, camels and other animals have been used for both transportation and mounted attacks.

In some instances, pigeons are used for communication and photographic espionage.

Many other animals have reportedly been used in various specialised military functions, including rats and pigs. Dogs, too, have long been employed in a wide variety of military purposes, more recently focusing on guarding and bomb and drug detection.

“So with proper training, the camels are intelligent to help us in many ways in different environments. We are hopeful for the best results,” said Noor Gabow, Deputy Inspector General of Administration Police Service.

The President was informed the training had enabled the animals to, for instance, detect different sounds of gunshots when in danger.

A commander of the unit and his team demonstrated how they can approach different scenarios and how friendly the animals are in general.

They can distinguish between men and women, suspicious characters, different dangerous situations and react accordingly, the handlers said.

This is a unit of its kind in the region, officials said. Only a few countries, including Morocco, are using them for operations. 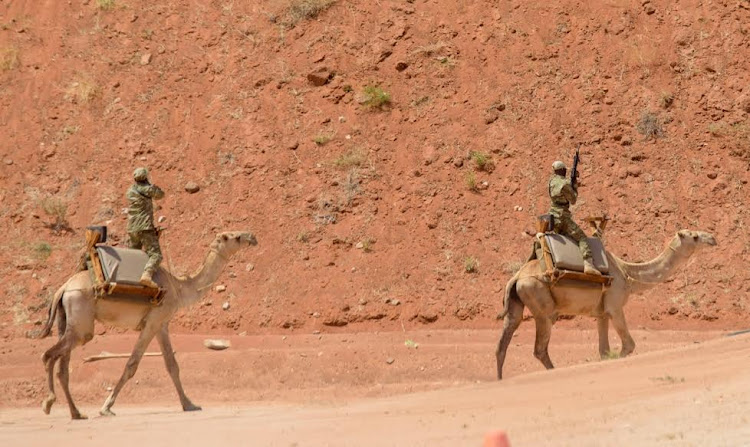 Officers demonstrate how to attack while on the camels during an event at Kamanga camp in Isiolo on July 14
Image: HANDOUT

Some of the camels ready for their work at Kamanga, Isiolo, on July 14
Image: HANDOUT

Camels, if and when trained well, are intelligent animals that can see far and alert their riders of incoming danger. This is a good move

Officials said the animals will mainly patrol remote sections of the Kenya-Somalia border in efforts to combat banditry and terror-related crimes.

“They can endure any condition. These animals are unique for now, and their value has gone up. They are ready,” Gabow said.

The pioneer Camel Patrol Unit under the Border Patrol Unit of the APS will be based in Isiolo county and will involve 150 camels and more than 200 special teams of officers.

The creation of the unit was informed by rising cases of terror attacks targeting security personnel on patrol in far-flung areas.

The BPU has been receiving much-needed attention to enable it to deliver its mandate of securing the borders and in particular the Kenya- Somalia one, which is poorly manned.

The officers are usually targeted while driving through harsh terrain that makes their vehicles vulnerable to attacks by bandits and terrorists.

And until and when these routes are tarmacked, the deaths and injuries will continue, hence the need for early detection and possible detonation before they hit targets.

The terrorists cross at will and plant the explosives before setting them off, targeting government vehicles.

The camels will now be used to patrol parts of the Northeastern region as well as areas prone to cattle rustling.

The concept was borrowed from India, Australia and New Zealand, where thousands of camels are deployed to police borders.

“Camels, if and when trained well, are intelligent animals that can see far and alert their riders of incoming danger. This is a good move,” said one of the trainers.

The President was shown how the animals are commanded in different scenarios, how they detect dangers ahead and react and what is done in such situations.

Those present exuded confidence the new developments are a milestone in efforts to innovate new ways of fighting crime in different environments.

The Camel Calvary Team now joins other animal units in the police service, including dog and horse units. Donkeys are also used in some instances for operations.

Officials say even terrorists use donkeys to move their wares from one place to another, knowing they are intelligent when trained.

This has prompted security agencies in the affected areas to also adopt the donkeys for operations. “Just like the other animals in the service, the camels will be taken care of well.”

As part of the training, a team of officers in the unit travelled to India to observe how camels are used to patrol the Himalayas border.

The event to launch the unit took place at Kamanga camp in Isiolo during the passing out parade of 256 Special Forces of the APS.

The new female-only team is also trained to endure various hard conditions as part of their survival skills.

It is a unique team of its kind that is emerging to be important. They also produce bodyguards for female VIPs, where they are increasingly in demand, officials said.

During the occasion, those in attendance were treated to a demonstration of the skills the officers have acquired.

The President urged security agencies to continue embracing the multi-agency approach in dealing with crime and safeguarding the security of Kenyans.

He noted the approach has enabled security officers drawn from different agencies to collaborate, leading to significant improvement in the state of security in the country.

“I want to once again say how great it is when agencies work together, when agencies collaborate. When we move with our multi-agency approach in terms of dealing with security matters, we are capable of producing results,” the President said.

This approach was introduced after the Westgate Mall attack in 2013. This followed the blame game from various agencies that were supposed to stop the attack that left more than 70 people dead. 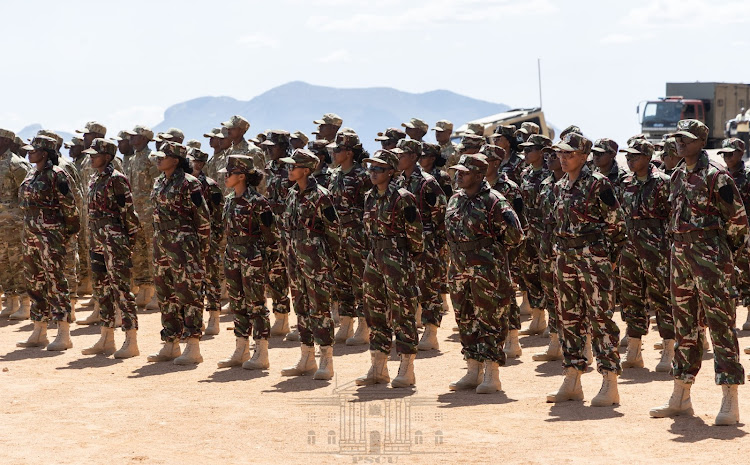 Some of the members of Swat Female team at the event
Image: HANDOUT
Breeding the Somali camel to boost milk production
by CYRUS OMBATI Chief Crime Reporter
Big Read
20 July 2022 - 05:00