Kirinyaga, where oxen are beasts of burden

From a young age, they are nurtured to develop strength and agility

• However, rise of boda bodas and ditching of carts by farmers make it a dying practice

A farmer guides his ox from the banana market in Kutus, Kirinyaga county
Image: WANGECHI WANGONDU

Gerishon Mugo's day starts at 5am. He is one of the thousands of ox farmers scattered across Kirinyaga county. His farm is about 3km away from the Kutus market, where he takes his farm produce on weekdays and Saturdays.

On this particular Thursday morning, the Star team catches up with him at 6am in the market, guiding his well-built black ox into the market entrance. Oxen are castrated bulls. Just like the many oxen present, Mugo's animal’s neck is fastened with a yoke that is attached to a heavy metal cart filled with green bananas.

For a moment, one would think it's an ox market or a bullock festivity. But on the contrary, it's normal for such a large number of animals to be brought on Mondays and Thursdays, the official market days in Kutus. Mugo says the numbers of oxen in the market has dwindled over the years since he started the venture.

“This is an income-generating activity. I started using ox carts to sell my farm produce over 30 years ago. Back then, business boomed compared to present days. It has been a profitable business, though, because it has enabled me to support my family,” he says.

Currently, he has three oxen. One is used for carrying goods, while the other two are still undergoing training on how to undertake the grind. The ox that is currently in use is one and a half years old.

“There is no definite formula for training an ox on how to carry goods. To start with, fasten an empty cart on the animal’s back while it’s a year old and make it roam around your home compound so that it can develop strength and agility. As days go by, add some weight on the cart until it can comfortably carry a big load.”

Many farmers in the county prefer exotic breeds to indigenous ones, citing their strength. Native breeds cannot withstand the hard nature of the job and weather hostility, Mugo says. They also cannot walk for long distances as they constantly run out of breath.

Mugo's bullock works from 5am to 3pm, after which it rests until the following morning. In between its work, he constantly feeds it with Napier grass, baby corn, animal feeds, vegetable peels and plenty of water. 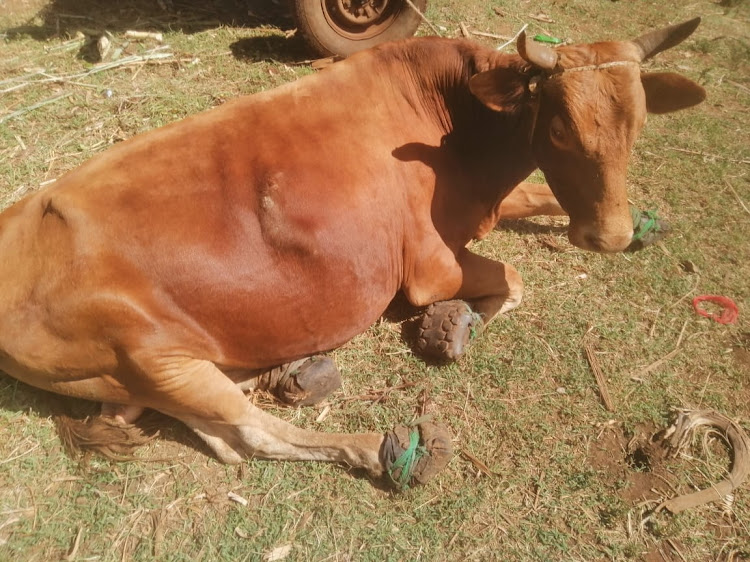 An ox takes a rest with cues (ox shoes) on
Image: WANGECHI WANGONDU

During the interview, Mugo's client shows up and he starts to disembark the banana load. Soon after they are done, he unfastens the heavy carriage off the livestock’s body.

“The animal can feed many times during the day as long as they are not working. There are plenty of vegetable and fruits peelings at the market, which we feed the animals so they can be re-energised,” he says.

“When I get home, it grazes in the nearby fields and later takes a rest until the following day.”

Before he resorted to having his animals do one type of task, he would subject his former oxen to many tasks, including carrying goods to the market, fetching water from rivers for construction and harrowing farms. As a result of overworking them, many developed health problems.

“Unlike a donkey, which is limited to goods transportation, an ox on the other hand can do a lot of duties. In our county, they have helped in ploughing many farms, from the mushy rice paddies to the dry maize farms. Currently, owners who specialise in the work charge Sh2,000 to plough an acre of land.”

A few metres away, John Gachoki, yet another oxen farmer, is busy fitting cues on his ox’s hooves.

Ox cues are special homemade rubber shoes put on the animals to protect their hooves. They also help in reducing friction exerted between the tarmac’s surface and the hooves as the animal is walking on tarmac roads.

“Just like the nerves of a normal human foot cannot withstand the pressure borne by the small, asphalt stony particles, the hooves ought to be protected as well from those particles that penetrate through animals with cloven hooves.”

Many farmers have adopted the special shoes for their animals. Most of them know how to design them, thus do not require the services of a specialist. The special hooves wear are simply cut from recyclable tires. Each of the cues is then lined with a soft piece of cloth, which acts like a sock.

The few farmers who cannot afford scrap tires to draw the raw material from have to part with Sh400 to get four pieces made by either a specialist or their fellow farmers. 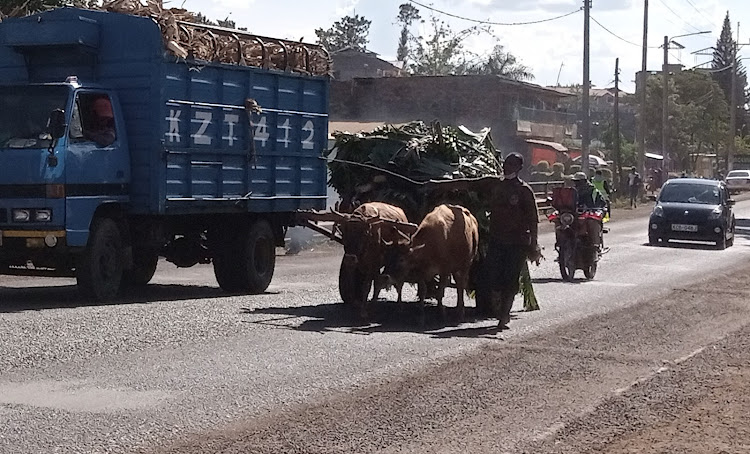 Just like any other venture, the job is no mean task and comes with its shares of challenges. Gachoki says sharing many tarmac roads with motorists poses a great challenge as many are the times they get insults from motorists when their animals accidentally take the wrong side of the road.

They urge the national and county governments to improve the state of many interior roads, which Mugo said are pathetic when it rains.

“During rainy seasons, many roads are impassable. Many of our carts get stuck, which leads to rotting of our farm produce. We would appreciate it if both governments would gravel the roads."

Njeru Muarange, a former oxen farmer, repairs broken ox carts at Kutus market. He says he abandoned farming in the early 2000s in favour of welding carts, an already demanding task back in the days. However, the business has since shrunk, reducing him to repair a few broken carts.

He blames the introduction of boda boda as an alternative mode of transporting goods to the market for the slump in his once-thriving business. Nowadays, many traders are relying on boda bodas.

He also says farmers are abandoning the activity and joining other income-generating ventures, and selling their second-hand carts to other farmers at nearly half the prices of new carts.

“I used to source metal for making carts from Nairobi. For each piece, I would sell it at Sh30,000. They were in demand because farmers would carry huge bunches of bananas and oxen were the common means of transporting goods.”

He says owners should ensure the animals are well-fed with nutritious feeds, supplements and minerals. They should also be vaccinated and dewormed after every three months. Mistreating and overburdening the animals should be avoided as they can hurt their health.

“Farmers should let them access veterinary care often as they do almost three-quarters of a tough task. Their health should be checked regularly for they are susceptible to diseases such as foot and mouth, lumpy skin and other viral ailments,” Gichangi says.

“While carrying loads, owners should ensure the carts are well designed and the yokes fastened on the animals’ necks are lined with a soft padding so as not to cause physical injuries on their bodies.”

The director urges farmers sharing tarmac roads with motorists to wear reflector jackets for visibility purposes on the road to reduce accidents.

He says many owners overburden their animals. Draught animals are not supposed to carry goods weighing more than 250kg. Much as they are endowed with special ligaments in their bodies that can withstand stress, overburdening them is wrong, he says.

Gichangi says a one-year-old ox can transport goods. However, it should be paired with another animal for equal distribution of weight.

“Back in the days, we had a policy that forbade farmers from putting too much weight on their animals. That policy was being implemented by the traffic officers, such that if the farmer was found to have violated the laws, he would be forced to relieve a bit of the burden off his animal and carry the right weight.”

Gichangi says as a county, they conduct annual training programmes and trade fairs for all farmers and in course of the year, they will be rolling out yet another programme that targets all livestock farmers.