• Through it, children can celebrate the continent’s beautiful and diverse cultures 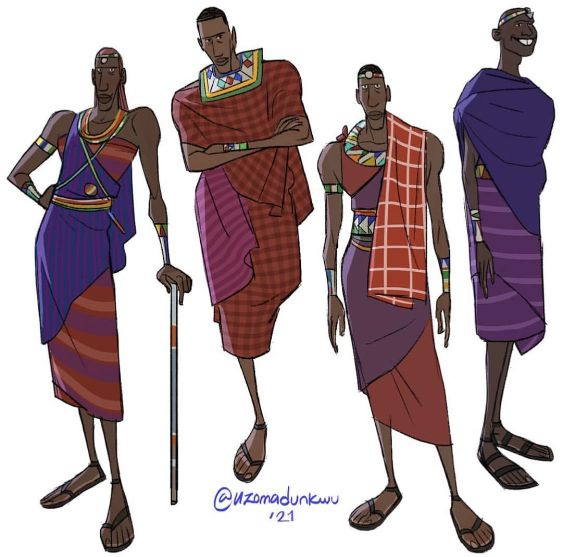 Uzoma Dunkwu is a man on a mission: to inspire generations of African children to connect with their heritage and culture. The Nigerian artist recently focused his creativity on a colouring book that celebrates different African attire. It all started with a social media post.

“After a LinkedIn post I made that went viral in December 2020, I realised that many people from all around the world are seeking unique voices, specifically from underrepresented cultures," he said.

"This challenged me to create an authentic, child-friendly book to educate children of the world about Africa in a fun way: The African Attire Colouring Book.”

The book was launched in February. It features 30 drawings of African children proudly adorned in traditional attire from 15 different ethnic groups on the continent.

Each illustration comes with fun descriptions that educate readers about the people featured and the significance of their clothing.

Dunkwu says as a creator, all he thinks about is his responsibility to God and his ancestors to showcase the beauty and cultural diversity of Africa to the world.

“This should come naturally to me. But it didn't occur to me early enough because of how westernised the Nigerian society is,” he said.

“I'm fascinated by the amount of knowledge about African beliefs, traditions, myths and history that is not mainstream. It will exceed a lifetime of diligence to make this a reality, and I'm committed to this.”

Exploring African heritage and overcoming racism in US

Born and bred in Lagos, Nigeria, Dunkwu has always been interested in art and the stories and experiences it brings to life. Although he studied engineering at university, that did not hold back his creative interests or instincts.

“I've always been interested in the arts from my childhood. Upon graduation, I thought of doing something related to my innate abilities. I started by creating comics in 2012 and then I pivoted to animation in 2015,” he said.

That 2015 was a crucial year for Dunkwu. During the year, he founded Scroll Entertainment Studio, a digital art content creation company that specialises in 2-D and 3-D illustrations, comics, film storyboards, concept arts, animations and game art. The company also runs a digital arts academy.

The company and Dunkwu’s profile as an artist have since skyrocketed. Both are likely to see even further growth thanks to partnerships with Netflix Animation and Marvel Studios Animation.

“I have been fortunate and blessed to have such a rare opportunity to work at these top studios,” he said.

“Their Talent Acquisition Recruiters contacted me to work on projects that are yet to be announced, so I'm unable to speak about them yet. When the projects are public, I'd have more freedom to share what roles I played.”

Even though he can’t speak about them, it is safe to say the projects will have a considerable impact on Africa's media production landscape given the extent to which global media companies are now investing in African stories produced by Africans.

“My ancestors died defending the honour of our culture. The negative impact of the West on Africa in the wake of the 20th Century and the fact that they have used mainstream media to suppress the intelligence of the people of African descent is why I'm taking a stand to change the narrative,” he said.

“Also, as a person of influence in my field, I must do what is right to inspire rising artists. Hence my art must heavily reflect my Afrocentric interests.”

The African Attire Colouring Book is available on Amazon, Lulu and Barnes and Noble.

Disclaimer: Dunkwu is a beneficiary of Africa No Filter, which also funds bird