The project displaced about 5,000 persons who either lost their land, homes and business premises 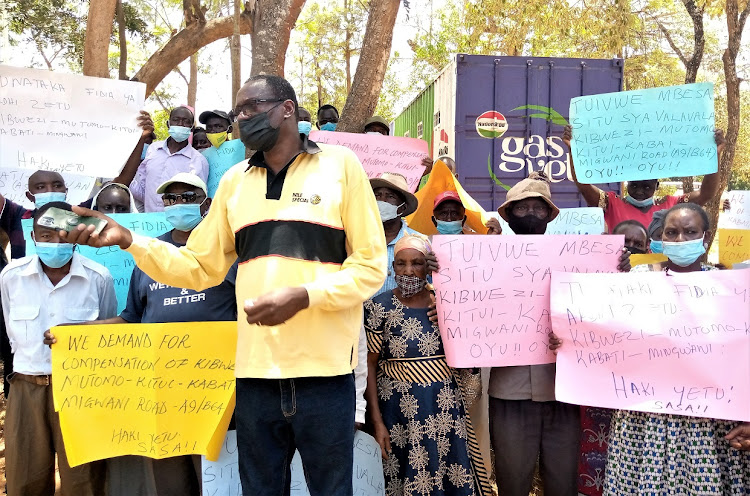 LAND COMPENSATION: People displaced by the tarmacking of the Kibwezi-Kitui-Migwani road led by Joseph Wambua (in the foreground) outside the Kitui county commissioner’s office on Thursday, March 3.
Image: MUSEMBI NZENGU

Kitui residents displaced by the ongoing tarmacking of the Sh21 billion Kibwezi-Migwani road are demanding Sh1.6 billion in compensation.

The Kibwezi-Mutomo-Kitui-Kabati-Migwani road project was launched by President Uhuru Kenyatta in 2017.

The project is being undertaken by the Chinese firm, Sinohydro Corporation and is scheduled to be completed in May.

However, the project displaced about 5,000 persons who either lost their land, homes and business premises.

The victims are yet to be fully compensated five years after the project commenced.

The victims have resorted to staging peaceful demonstrations outside the Kitui county commissioners office in an effort to catch the government’s attention.

Their plea for compensation has however been met by promises that never materialise.

On Thursday, the group staged another demonstration to continue pressing for compensation. 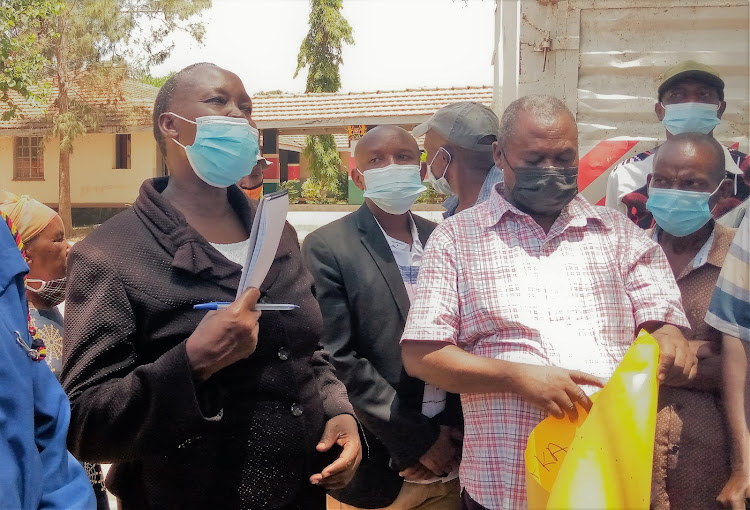 Wambua said the group had knocked many doors in vain and wants the government to speed up the compensations.

"We lost property such as houses and farms which were our source of livelihood. Life is tough and the government should stop the delays and pay up," he said.

The spokesperson said if the government won't act fast, the frequency and intensity of the demonstrations will increase.

“The government is courting a mother of all demonstrations sooner than later if it does not act on our cries,” he said.

Kanini Kitili who was among the demonstrators said she lost a big chunk of land.

She said it was unfair for the government to pay the contractor while no one cared about the displaced who have been reduced to a life of squalor.

"We ask our leaders to intervene and make sure that we are paid," Kanini said.

Kitui MCAs pass Sh11.2 million budget for transfer of operations and the renovation of the chamber.
Counties
5 months ago

Learners with disabilities in Kitui get wheelchairs, toilets

97 schools including 25 from Mwingi North, 39 in Mwingi Central, 14 in Kitui East, and 19 in Kitui south benefitted.
Counties
5 months ago