The fake news crescendo is a concern given the country’s recent political history.

• The fake news crescendo is a concern given the country’s recent political history.

• With a straight face, James says he doesn’t give a hoot about the impact of disinformation he peddles since ‘poverty is the enemy’ 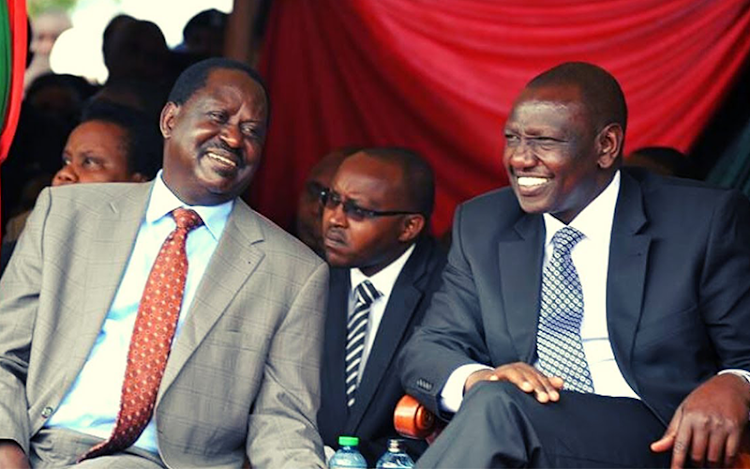 Politricks, half-truths, flavoured empty promises in smooth talks and online rabble-rousers, are some of the vote-hunting techniques for most politicians ahead of Kenya’s August 9, general elections.

This comes with a cloudburst of misinformation to shape perceptions. Its severe ramifications can not be overlooked.

With less than eight months to Kenya's general election, temperatures are rising and campaigns are in full gear, at least two months ahead of schedule.

Screenshot of a poll on political tag.
Image: COURTESY

The presidential race is seen as a battle between ODM leader Raila Odinga and deputy president William Ruto.

It is worth noting that the country has been strained by-election misinformations before.

The fake news crescendo is a concern given the country’s recent political history.

In the 2007 post-election violence, for instance, more than 1000 lives were lost. 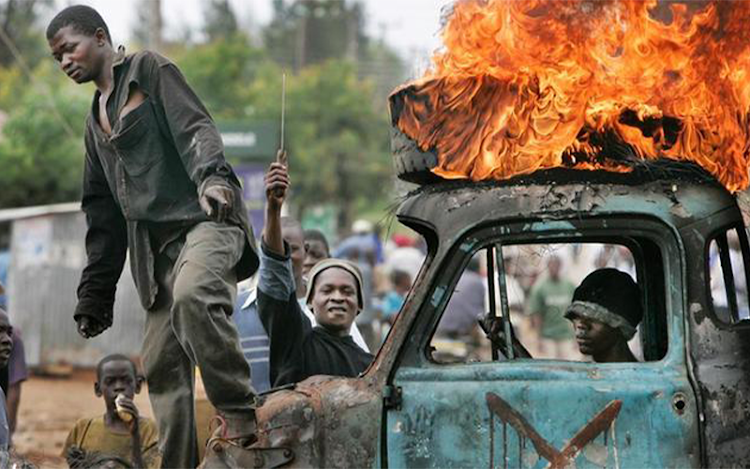 Politicians are now actively selling their agendas on social networking platforms since a majority of the targeted voters have internet access.

The number of social media users increased by 2.2 million (+25%) from the year before.

Bravin Yuri, a famous influencer with over 200, 000 followers, says politicians now “rent” social media bigwigs who present themselves as political think tanks and analysts to set their agendas online.

The bigwigs have over 1 million followers and can pull more engagement numbers than the mainstream media houses.

“There are people who act as agenda setters. Individually, they have numbers and a huge following more than the mainstream media. The target of most politicians is the youth. Most don't watch TV news bulletin, they consume information from social media,” says Yuri. 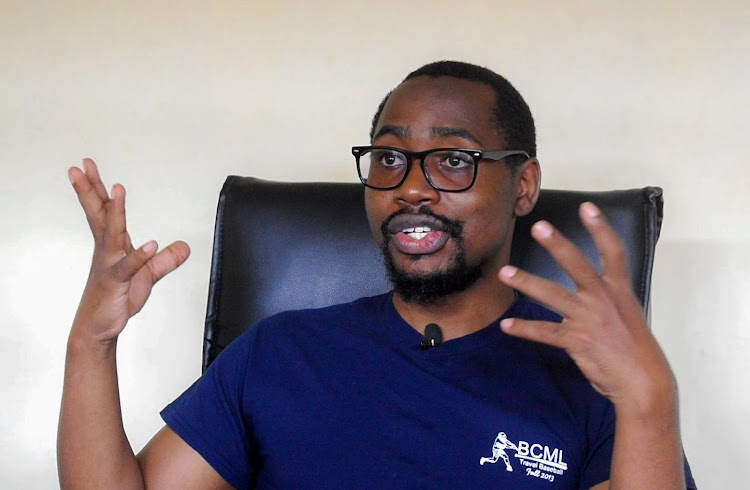 A poll conducted recently revealed that seven out of 10 Twitter users are willing to push political tags for money without caring whether the information they are peddling is misleading.

Yuri confirms that money beats ethics in the influencing sector in Kenya.

“I have seen most people do it for money without considering its harmful side. Today, they can peddle a smearing campaign against a certain politician then they work for that same politician some other day.”

We caught up with another popular influencer who revealed to us how the influencers’ underworld network involving high ranking politicians sponsoring misinformation and campaigns operates.

He, however, sought anonymity owing to the sensitivity of the matter. We will name him James.

James has been working as an influencer for almost half a decade now. He operates 10 pseudo and catfish accounts that have more than 15 thousand followers each.

He uses these accounts for political spins, propaganda and smearing campaigns hashtags. He only uses his real account, which has more than 50 thousand followers, for corporate brand promotion and advocacy.

“You cannot survive on these political gigs without catfish accounts. You must have at least ten. There are people with 40 pseudo accounts. The accounts tweet, retweet and like posts,” James says.

James, not his real name, has led disinformation campaigns for presidential aspirants, governors, senators, MPs and Members of County Assemblies.

With a straight face, James says he doesn’t give a hoot about the impact of disinformation he peddles since ‘poverty is the enemy’.

He confesses that the disinformation he engages in has the potential of stirring violence but maintains only politicians and not influencers are to blame.

“That’s my daily bread. I need money. I don’t care this is my brother whom I am tarnishing his name. At the end of the day, I need a plus one in my account,” says James.

James runs hashtags for aspirants in all the elective seats.

According to him, it costs a politician between Sh20, 000 to Sh100, 000 depending on the client’s status and the job at hand to make the politician’s agenda trend for a few hours on Twitter.

How do politicians establish contact with influencers? How does the transaction take place? 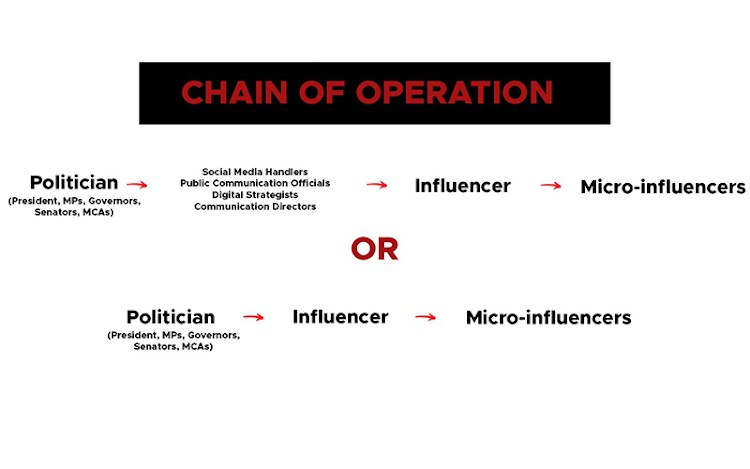 A summary of the influencing network for politicians’’ sponsored misinformation and smearing campaigns on Twitter.
Image: Lenscope Media

Politicians use their social media handlers and digital strategists to approach the influencers via text messages.

They negotiate the fee before the influencer mobilizes a group of around 20-30 other influencers who have more than 10, 000 followers.

The mobilization mainly happens on messaging app WhatsApp where they form a group.

Notably, those being mobilized mostly don’t even know the client.

“Unlike corporates which use agencies to reach out to influencers, most political hashtags go directly to influencers via politicians’ social media handlers. Politicians don’t even know who pushes the hashtags,” says Yuri.

The politician is required to deposit at least half of the fee and the rest after the task. No contracts are signed, ones word is their bond.

James, however, says some politicians occasionally contact him directly without intermediaries.

In instances where influencers have to use sensitive graphics for smearing campaigns, James says they include professional graphic designers in their mobilized WhatsApp group.

“In the WhatsApp group, we have a graphic designer, content creators, the most influential person. Sometimes the graphics come from the politician but I must admit we tone them down if they are more sensitive,” says James.

Tribalistic Hashtags like #WakikuyuMtafinywa trended in Kenya on December 16, 2021, with over 1000 tweets aimed at fearmongering Kikuyus on DP Ruto’s presidency.

Most tweets in the trend came from faceless tweeps’ accounts that showed a high likelihood of being bots when gauged on botometer.

The hashtag claimed the DP has a vendetta against the Kikuyus and that his presidency will haunt the Mt. Kenya residents.

Mt. Kenya votes have been at the centre of attention for both Ruto and Raila.

Our open-source investigations led us to other hashtags.

In the early morning of November 27, 2021, #rutothemeruenemy was the top trend on Twitter.

The tag was seemingly asking the DP to apologise to the Meru community for alleged attacks on their leaders. Other hashtags targeting the DP include, #hungryruto, #rutoatatumaliza #hurubaropercapita.

On the flipside, Raila has also been targeted with a fair share of online slander and smearing campaigns under the hashtags #RailaStateProject, #Azimiolamawe which aimed at portraying him as a violent man and many other hashtags.

According to Yuri, political spins, smearing campaigns and propaganda campaigns involve robust coordination between the client and the influencers.

The clients and the influencers strategically choose the day and time to set their agendas depending on what is trending.

“It is definitely a prearranged thing. Trending requires coordination between influencers and clients. Their tweets will prompt other people to join in the conversation. Some would discredit the hashtag but by doing so they will be making it to trend,” says Yuri.

Citing unrest witnessed in the previous general election, Yuri says that the deluge of misinformation will most likely affect Kenyans when it comes to voter suppression, candidate eligibility, incitement to interfere with democratic processes and election integrity.

“Most people are not on Twitter but they get misinformation screenshots on messaging apps such as WhatsApp and Facebook. Without verifying, they share and many people believe in the misinformation then make political decisions based on that,” says Yuri. 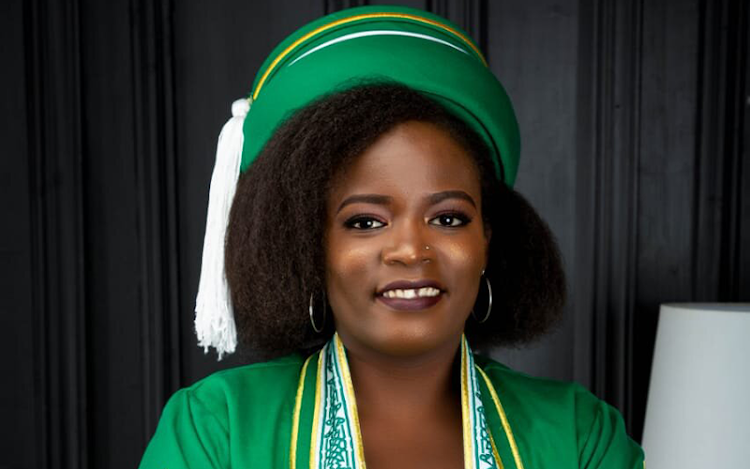 Mary Kulundu, an AFP fact check reporter says politicians engage in propaganda to shape perceptions that would either benefit them or handicap their opponents.

“Politics is all about perception. In this digital era, perception is created online as a large section of the population spend a huge chunk of their time online. Since politicians are out to wrap up numbers, they use every tool in their box to get the numbers including misinforming the public,”  Kulundu said.

She, however, warns that some sensitive online disinformation campaigns are tantamount to incitement that could trigger violence on the ground.

“Incitement is dangerous. There are numerous examples of hate starting online and having a ripple effect on the ground where people are injured,” Kulundu says.

The fact-checker adds that the media has a huge role to play ahead of the 2022 general election amidst concerns it is not doing enough to contain misinformation.

To some extent, the media has been accused of promoting misinformation with reference to a recent move by a leading news outlet to write a story based on a tweet from a parody account impersonating someone else.

“It is very irresponsible for the media to pick tweets and use them to form a basis of information without verification. The media must verify every piece of information it selects to publish. The need to be fast must be secondary in this digital space where it appears there is competition for likes and engagements,” Kulundu stated.

The big question remains, why is the government not holding peddlers of propaganda and smearing campaigns accountable?

The authors are graduates of Bsc. Communication & Journalism, class of 2021 from MoiUniversity.

Post a comment
WATCH: The latest videos from the Star
by SIGOMBA RAMADHAN AND BRIAN MURIMI
Big Read
18 January 2022 - 10:12
Read The E-Paper