Where stingray bites are the ultimate turn-off

• They believe sex within six months will perpetuate injury or kill them. Medics refute it 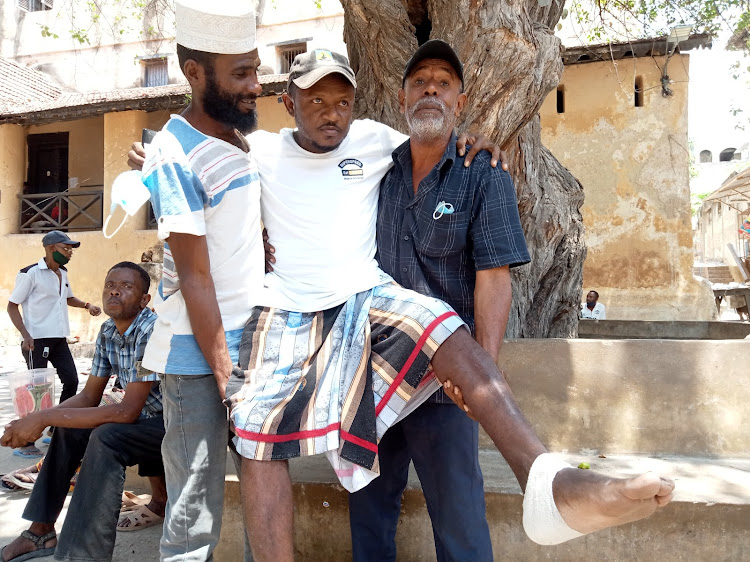 Kombo Shee cannot walk after he was bitten by a stingray
Image: CHETI PRAXIDES

An age-old superstition is religiously adhered to by the people of Lamu island and the rest of the archipelago whenever bitten by stingrays.

Once bitten by a stingray fish, it says, you must not have sex for at least six months to allow the wound to heal well and prevent any bad omen.

It is believed that any attempts to have sex before the period lapses will result in death or the wound will never heal, leaving the victim in eternal pain.

Medics, however, term this a myth. “There is no scientific proof to support the assertion that those bitten shouldn’t have sex,” senior medical doctor Mohamed Kombo said.

Stingrays are flat, disk-shaped creatures with fins that resemble wings. They are a group of sea rays related to sharks and are common in coastal tropical and subtropical marine waters throughout the world.

Species of stingray can be found in either saltwater or freshwater. They are most often associated with tropical ocean climates, and their sting is a commonly reported beachgoer injury.

In Lamu, since most stingray bite victims are men, this means both husband and wife starve each other sexually for six months or more, depending on how healed the wound is.

As a result, men migrate from their homes to stay with relatives after being bitten for fear of being ‘tempted’ to get intimate with their wives before the healing period ends.

“We advise those who can to stay put. The weak ones are asked to go stay far away with friends and relatives,” elder Khaldun Vae said.

“Only after six months can they go back to their wives. It’s a belief practised by our forefathers and we respect it.” 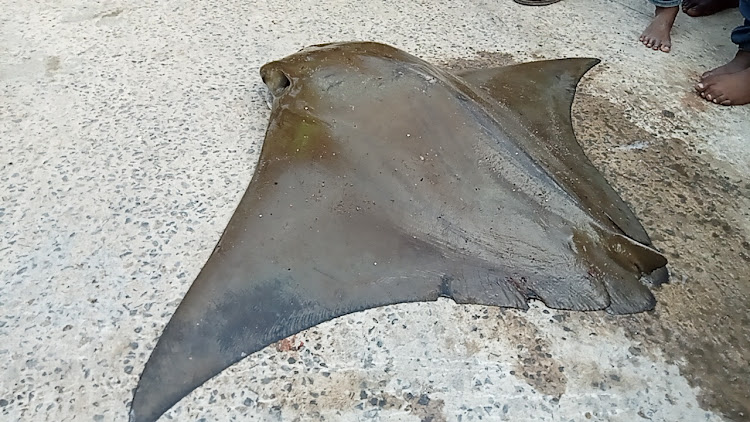 Only after six months can they go back to their wives. It’s a belief practised by our forefathers and we respect it

A stingray’s tail is long, thin and tapered, much like a whip, and at the end of the tail are one or more barbed spines covered by a sheath.

Each spine contains venom that makes the stingray’s tail pack a powerful and incredibly painful sting.

These sea rays often burrow beneath the sand in the shallows and swim in the open water and will usually only sting when disturbed or stepped on by unaware swimmers or fishers.

Lamu marine biologist Mohamed Lali says because stingrays camouflage themselves under sand to hunt for prey, they can be hard to spot and easy to step on if you don’t know what to look for.

Once threatened, a stingray will whip its tail in defence, which can reach up and over its head, leaving a laceration or puncture wound in your skin.

When a stingray whips its tail at you, one or more of its spines may pierce your skin. The sheath around each spine then breaks apart and releases venom into the wound and surrounding tissue.

Lali explains that stingrays most often sting people in their feet, ankles and legs, but sometimes a sting may occur elsewhere on the body.

To avoid a stingray sting, it is advisable to shuffle your feet in the sand as you wade through shallow water.

“This will give stingrays a warning that you’re coming their way and allow them time to hide and get off your tracks,” Lali said.

Another option is to throw shells or small rocks into the water ahead of you as you wade. The objective is to alert the stingray to your approach because they do not like to be startled.

For most people, stingray stings heal within a few weeks. Expect localised numbness and tingling around the wound site during the healing period.

“Stingrays have venomous spines on their tails,” explains Lamu marine biologist Mohamed Lali. “If you accidentally step on a stingray, it may respond by thrusting its tail into your leg or foot. Venom and spine fragments can cause the wound to become infected.”

Stingray stings usually cause intense pain, nausea, weakness and fainting. In rare cases, a person who is stung might have trouble breathing or even die.

“The location of the sting, amount of venom in the tissue, extent of tissue damage and promptness of treatment will affect healing time. If you have to undergo surgery after the sting, your recovery will take more time,” Lali says.

In Lamu, the stingray is a most sought-after edible seafood as it is believed to boost libido in men, among other health benefits.

Bajuni elder Khaldun Vae says the stingray soup is in itself a powerful aphrodisiac that has been used over the years to enable men to stay in charge of their sexual lives even at advanced ages.

“People only know of octopus soup, commonly known as supu ya pweza, but there is also the stingray soup, which equally functions well,” Vae said.

Despite the deadly threat posed by the stingray, fishermen in Lamu still dare to hunt it down daily, and they say it’s worth the effort.

Vae says due to the risk involved in catching the sea ray, it is sold at a slightly higher price than the rest of the seafood caught in the region.

“A kilo goes for at least Sh800. The meat is really sweet and can be eaten by all, but the soup is good for men’s libido,” said Kassim Ali, an elder in Kizingitini island, Lamu West.

Lamu fisherman Abdallah Kupi says there is a thrill that comes with hunting and catching the stingray, and it is not always the case that one gets bitten.

Since the stingray targets the feet and hands when attacking, Kupi appealed for special marine shoes for stingray catchers in Lamu to help them stay safe as they hunt down the ray.

“This is our livelihood. We do it for the money and because the demand is high, but we fully understand the risk involved. If we have a way to protect our feet, then we will be safe,” he said. 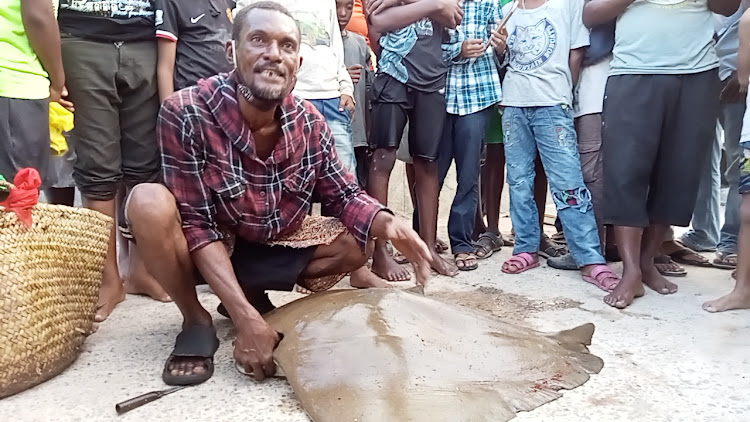 Ashraf Muashiam, 46, was bitten by a stingray on his left foot three months ago as he hunted stingrays in Kizingitini island, Lamu East.

As tradition requires, he has had to stay away from his wife for all this while, and he still has three more months to go.

Because it was hard for him to resist the urge, he travelled to Lamu island to stay with his brother’s family as he recovers.

He describes both the sting pain and sexual starvation as excruciating, considering the extremely long duration required for healing.

His wife wanted to nurse him but Muashiam insisted on going away as he could not risk the sexual urge that might cost him his life or worse.

“Its is so hard for me but I can’t risk it because I'm afraid something could go wrong. I will go back home after three months. My wife is very understanding and she is with me on this,” Muashiam said.

Kombo Shee, 32, was bitten by a stingray a month ago as he fished in Faza island, Lamu East, and he says he is lucky because he is unmarried.

He says his own struggle has been more about getting well than having to go for months without sex.

“I don’t have a wife yet and I'm grateful because I cannot imagine how a normal man can go for a whole six months without sex. I would not have made it but since I'm single, I'm not stressing. I will get better and marry,” Shee said.

Stingray catchers of Lamu have appealed to the county and national governments to provide them with the necessary safety gear to reduce their chances of being bitten while at it.