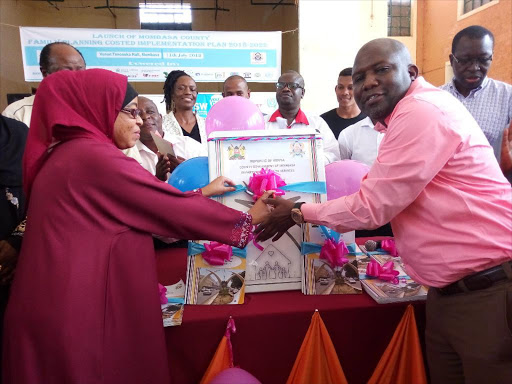 Mombasa resident Khadija Mohamed (not her real name) has seven daughters between two and 12 years old. And she is two months pregnant.

She uses the withdrawal method, which she admits is not so effective but leaves her sex drive intact so she can satisfy her husband, who wants more children anyway.

“My husband’s desires come first. He can opt for another woman if I’m not satisfying him,” Khadija, whose husband is customarily allowed to marry up to four wives, said.

Her identity is hidden because her husband, a cleric, did not permit her to speak. The husband considers the withdrawal method “sound”.

But Khadija can’t stand them because of the side-effects, which include a reduction in sex drive. She says her family is not struggling to take care of the seven kids.

It is a different tale, however, for Faith Nzisa, who is doing menial jobs to bring up her five children. Though the children are spaced — the firstborn is 17, second 14, third 10, fourth six, and the lastborn two — Nzisa says it is tough to make ends meet.

Her husband is also doing low-grade work, whose income she said is not sufficient. But like Khadija, she won’t risk contraceptives that could compromise her libido and tempt her husband to stray.

She would rather “traditional” means like rhythm (abstaining from sex during your most fertile days), which is however considered one of the least effective forms of birth control.

The two women represent the grim reality facing five per cent of married women in Kenya, who don’t use contraceptives.

Acting Mombasa county director of health Shem Pata told the Star the “Mwenye” Syndrome (the belief that husbands “own” their wives) is the biggest threat.

“There are quite a number of people who traditionally cannot decide anything, unless there is involvement of their husbands or the in-laws,” he said.

“When they come to the clinic, they don’t come with these people, and therefore, they will not be ready embrace FP methods. If they opt in, they will do it secretly.”

A county research shows most Mombasa women control their births modernly, but some are struggling with the side-effects. It found that 31 per cent of family planning users in the county discontinue the method within 12 months.

”Side-effects and health concerns ( 11 per cent) are the main reasons for discontinuation,” the findings note.

The study is titled Mombasa Family Planning-Costed Implementation Plan (FP-CIP) 2018-22. Deutsche Stiftung Weltbevoelkerung was the leading partner in this research.

It found that injectable is the most common Family Planning method among women in Mombasa. Intrauterine device insertion is the least preferred, while the pill is the second most used, followed by implants insertion.

Others are decreased libido, vaginal discharge and eye changes. Some pills have also been associated with cancer.

“Why should I attract cancer in the name of limiting the number of births? Cancer will eventually kill me, my kids won’t,” Khadija said.

Victoria Kahindi, 23, who got her firstborn unplanned, is using pills but says the effects of other methods make her shy away.

“I wanted to have an injectable but I don’t want to gain weight. I’m content with my size,” she said.

In 2017, Kenya committed at the London Family Planning Summit that all the counties will have an FP-CIP by 2020. So far, only Mombasa, Kilifi, Nandi and Nakuru have these documents.

If the goals are achieved, he said, millions of lives will be saved and an improvement in the health and well-being of women, families, and communities recorded.

For Mombasa, the plan is aimed at controlling the population — currently projected at 1.3 million with an annual growth rate of 3.5 per cent — by increasing utilisation of FP from 48 per cent to 80 per cent come 2022.

The action plan states that total fertility rate will reduce from 3.2 to 2.9 per cent and teenage pregnancy lowered from 17 to 10 per cent.

The document anticipates the capacity of the healthcare workforce in FP to improve by 20 per cent over the same period. Other strategic objectives include improved availability, quality and use of data for decision making.

But as the county encourages more use of contraceptives, Nzisa, Khadija and other women are wary of the side-effects and consequences of not satisfying their husbands.

Mombasa health chief officer Khadija Shikely said if all Mombasa women take up FP, the county will become a middle-income region in 30 years.

“By committing ourselves to the full implementation of the FP-CIP, we can realise our goals of reducing unmet needs for FP to 15 per cent and increasing the modern contraceptive prevalence rate amongst women in a union to 63.6 per cent by 2022,” she said.

“FP has proved to be the most cost-effective intervention in preventing maternal deaths. It also contributes to economic growth and reduction in child mortality, unplanned pregnancies and unsafe abortions,” she said.

When the ImpactNow policy model was applied for Kenya, every Sh85 spent on family planning was projected to accrue savings of Sh381 in direct healthcare cost by 2020.

DSW’s Ongwae said the amount is not enough, while health director Pata said at least Sh100 million is needed annually.

“We hope the allocated amount will be disbursed and spent on what is intended. A budget study has been done and it found Mombasa has had an increment in FP allocation over the year but resources are not matching the needs,” Ongwae said.

The FP-CIP has a summary budget of Sh550 million for the achievement of all goals in the next five years.

In this budget, more emphasis has been put on medical products, commodities and supplies that entail supply chain management, resource mobilisation and quality control.

Swaleh said based on the Tehran Proclamation, women and girls have the right to avoid the exhaustion, depletion and danger of too many pregnancies. “Men and women have the right to choose when and how often to embrace parenthood, if at all,” he said.