END OF THE ROAD?

Former agricultural officer’s children, one of whom got A- in this year’s KCSE exam, are staring at an uncertain future 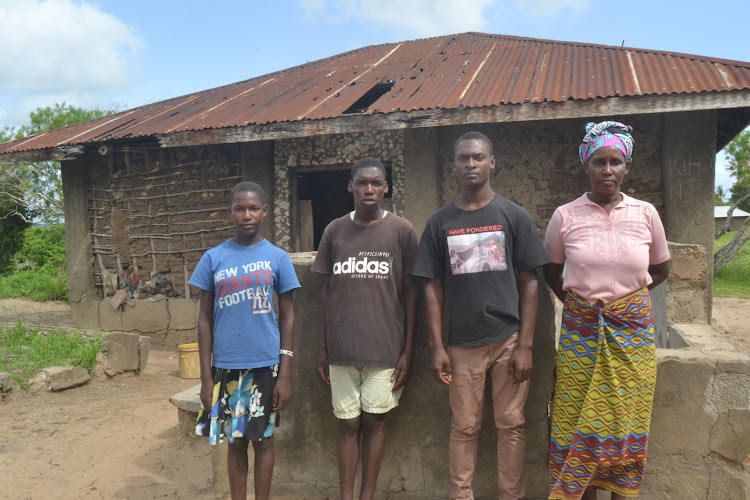 Zawadi Charo, the wife of a former agricultural officer, with her children in Kaembeni, Magarini, Kilifi county
Image: ALPHONCE GARI

Any woman dreams of having a happy marriage and a well-educated family when they decide to marry the love of their choice.

The expectations are especially high when a woman gets married to a husband working in government with a good salary.

For Zawadi Charo, now 42, her ambitions were achieved when she chose to marry an agricultural officer and even set up a proper foundation at their rural home in Kaembeni Magarini constituency.

Life was promising until 1996, when Ngumbao Erastus was sacked and returned home penniless, hopeless and depressed. He whiles away his days at a trading centre and does not contribute to family welfare.

Little did Charo know it was the beginning of endless suffering and desperation for her young family.

That time she had one child and later gave birth to five more, with the hope that life would change for the better.

It did not happen and the house, which used to be one of the best in the area, has become like a monument and is leaking all over.

“My husband was working but was dismissed a long time ago in 1996 and chose to stay home. I had one child then and was doing odd jobs for survival,” she said when we paid her a visit at the home on July 7. 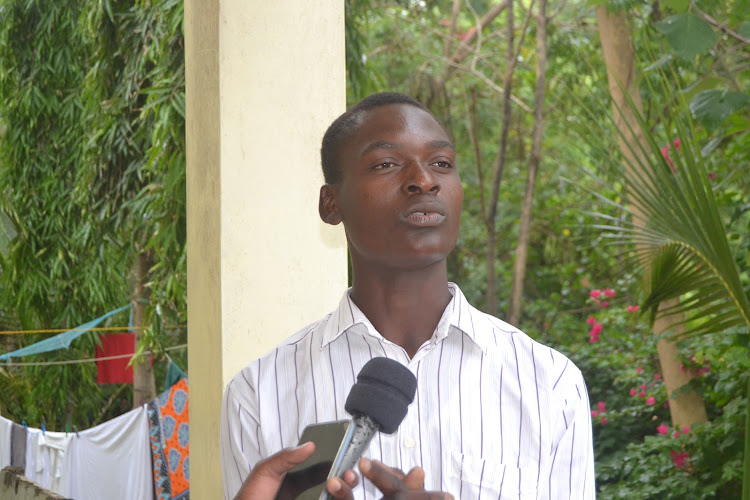 Peter Erastus, the third-born in the family of six, who scored A- at Mamburui Secondary School
Image: ALPHONCE GARI

Since then, she became the sole breadwinner of the family, tilling land for pay before joining one of the salt firms as a casual labourer. She, however, could not earn enough to meet family demands.

Her third-born scored A- in the recently concluded KCSE exam, while her second-last born, a girl aged 16, scored 309 marks and may not proceed to the next level due to lack of fees.

The family's plight was brought to our attention by Halima Omar, the principal of Mamburui Secondary School in Magarini, when we visited the school that performed well in the last KCSE exam.

She said one of the candidates who scored A- was in a dilemma as he was from a poverty-stricken family that could not even afford his secondary education.

Omar sponsored the boy, Peter Erastus, who is now 21 years and is due to join the university later this year, all through his secondary level after learning of his plight.

Recently she got reports that the boy had many challenges at home, even that of getting meals as the father has a psychological problem and the mother also lost her casual job at the salt firm.

“I decided to bring him to the school to help teachers mark exams and assist in the laboratories so as to get something for survival and a smartphone, which is what he wants,” she said.

He had even wanted to be given any casual job like sweeping or gardener, but the principal thought it would set a bad example to others who would wonder why a person who scored an A-minus was doing such a casual job.

That is when we requested to meet the family the following day to have a glimpse of their condition.

Their home is about 30km from Malindi town on the new Marikebuni-Marafa road, a few kilometres past Kaembeni trading centre.

Agony of villagers infested by jiggers in Gusii counties

At the home came the true picture of the former agricultural officer’s house.

The old, rusted iron sheets are leaking, and the house has only one bed without a mattress. The mud walls are open and one can see anyone inside from afar.

We were welcomed by Leah Erastus, 16, who completed KCPE this year and scored 309 marks. She is supposed to join Form 1 at Ngala Girls' High School.

She wept as she narrated how her father is not responsible and does not seem to care about her education.

She felt there is no hope of joining Form 1 and her dreams of becoming a doctor after completing school are shattered.

“Every day I talk to my father about it, he says he is strategising but he does not plan anything,” she said amid sobs.

Getting three meals a day has been elusive for a long time at home. She would often miss school as there was nothing to eat.

“I would come home for lunch and find there is nothing to eat. In the evening also, we would sleep without food," she said.

Currently, she stays with her uncle, but the challenges at home always make her weep. She hopes one day she will be able to support her family if she gets a chance to complete her education.

Peter, the third-born in the family of six, said their firstborn died when he was in Form 1 and the second one got married at an early age.

He said his struggles began a long time ago, when he was at Ng’andu Primary School, as life was really tough at home.

“After finishing primary, I had a debt of Sh700 and could not afford to pay the balance. I got a place at Malindi High School but due to lack of fees, I was sent home while in Form 1.”

He stayed home for a year until his aunt, who was working hard to get sponsorship, found help at Mamburui Secondary School.

When he got the news, he had to walk from home to Mamburui as he had no fare.

Through the principal, he got a full sponsorship up to Form 4 but had to repeat Form 1.

“Right now, I don’t know what will happen because I have excelled in my studies but the situation at home is bad. My mother who used to help me while in primary school has no job, that’s why I was sponsored by Madam Halima,” he said.

He said the father has a mental problem and that is why he cannot offer any support for him to go for further studies. 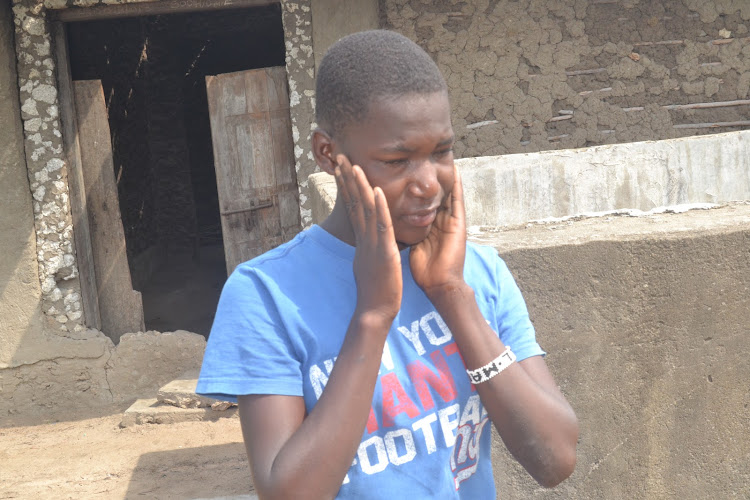 Leah Erastus, 16, who got 309 marks in this year's KCPE, sheds tears of despair during the interview
Image: ALPHONCE GARI

Peter thanked the principal for recalling him back to school, saying he would be able to get money to buy a smartphone.

His hope is to get a place at University of Nairobi, Egerton or Kenyatta University, where he aspires to get a Bachelor’s degree in education.

“I would like to be a teacher because that’s my passion, to teach mathematics, physics and chemistry,” he said.

He appealed to well-wishers to come to his aid to enable him go to university and also support his sister’s education so they all come to help the family.

At home, food and even clothes are difficult to come by. His hope is that once things go well, he will be able to change the family’s living standards.

“I appeal to well-wishers to help me go to university. I want to proceed with my education. I pray that any sponsor out there hears my cries,” he said.

His mother said she is unable to finance the two bright children’s education due to the financial constraints at home.

She said the husband refused to look for another job after dismissal and normally wakes up in the morning and walks to GIS trading centre, where he spends the whole day until evening.

“Every morning he goes there and comes back late at night alone with nothing, expecting to get food. That is his life now,” she said.

She appealed to well-wishers and good Samaritans to help her educate her children.

Omar the principal said she was touched as a parent when she heard the plight of Peter and decided to help.

She said the boy is disciplined and hardworking, and that’s why he managed to get an A-.

Many other bright children from poor families were supported and completed university, she said, but that time financial situations were good.

Omar said they managed to pay university fees for the others and some are now employed as clinical officers, teachers, police officers and are helping their families.

“There are two who are still in Egerton University. The school failed to pay for them but I decided to fundraise with friends to help them complete,” she said.

Due to the Covid-19 pandemic, she said it has been difficult to support more children as the economy is bad.

The family hopes once the two children are educated, they will be able to help their parents and live a better life. 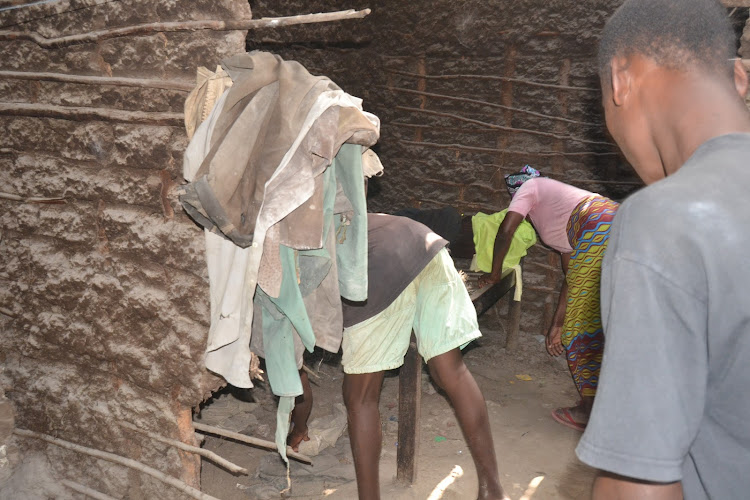