Agony of villagers infested by jiggers in Gusii counties

Breadwinners are being incapacitated, pupils dropping out of school due to stigma

• The fleas are flourishing in poor sanitation, causing inflammation that haunts locals

• Activists want funds allotted to fight the problem, but some politicians want it hushed 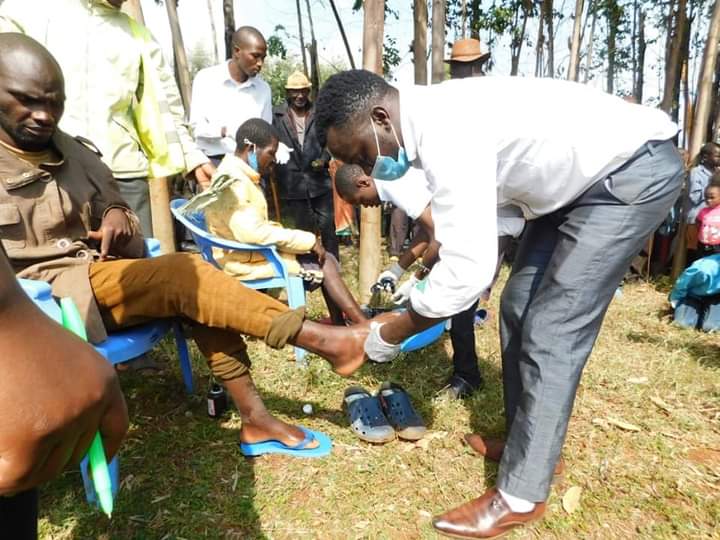 A man in his mid-40s receives treatment at Ngokoro in Marani, Kitutu Chache North, where more than 15 households are suffering from jigger infestations
Image: MAGATI OBEBO

It is Sunday evening at Magwagwa in Nyamira county. As the sun sets, Isabella Mongina is carried out by well-wishers, and she quickly slumps onto an old, torn sack under the avocado tree shade.

The widow is in her 50s but looks 20 years older. She stretches out her feet. An odour quickly wafts into the nostrils of a visitor. You just have to cover your nose to block it.

The feet are uneven, large and ugly. A patchwork of jiggers on riot.

The beddings in the house are in tatters. They speak of want, and there is an evident lack of means with which Mongina can improve her surroundings.

The sitting room is vast and empty, except for one cow tethered to a peg. A pungent smell of urine hovers around it.

The picture is equally stark for the woman’s five children.

There is no bed in the house in the practical sense of the word. Just a wooden structure erected at the corner and rafters hastily nailed to them to look like a bed.

It is here where Mongina and all her children sleep.

“Few visitors come here and when they do, it is like you, they come from very far, those only who happen to know my sufferings,” she says.

Mongina is one of hundreds of jiggers victims dotting the Magwagwa villages.

When I was married, my feet were okay. Soon, I felt a stinging sensation in one of my toes in the left leg. It was a jigger. Never has my life been the same again

The widow has been with jiggers for more than 10 years now, and counting.

“When I was married to this place from Keroka, my feet were in good shape. Soon, I felt a stinging sensation in one of my toes in the left leg. It was a jigger. Never has my life been the same since then,” she said.

Her feet have since been corroded. Even with ongoing medication, they may not recover fully.

Her husband died years ago. Mongina believes the jiggers had a hand in it. He died suddenly in his bed as he slept, she told the Star.

"He was just malnourished and anaemic,” she said, looking distantly into space.

Her five children are not in any better shape. Not far from where we were seated, the last one was scratching his toes endlessly, an indication of a new pest on the rampage.

It is for this reason that Mongina is being visited, for the third time, by the Compassionate Hearts Ventures group.

The group has been visiting her for days now to treat her feet.

The members use special drugs to eradicate jiggers from a victim. In some cases, however, the pests can be stubborn and refuse to go away.

It is all about perseverance, says group coordinator Patrick Matoke.

Courtesy of the group’s efforts, today, Mongina’s feet have begun to take shape.

“It can get bad, almost desperate,” Matoke says.

Many people in Mongina's shoes are despised. Nobody wants to help them.

Even churches, often depended on to give spiritual comfort to the downtrodden, can be of little help to the jiggered.

Many shun them like the lepers, leaving them with few options but to keep keeping on by their own.

It can get scary for some. With nobody to take care of them, a few died alone in their sleep.

At times, villagers just wake up to a bad odour and proceed to bury them in haste, and life moves on.

Matomke says such is the life of many of the ‘jiggered people’.

“We have gone to some churches, where security guards at the entrance bar them, saying they may contaminate other children with the jiggers,” Matoke said.

Children with jiggers also face stigma at schools. They even form ‘jiggers clubs’

“They pool together, forming a coalition of the jiggered because they are shunned by their peers, who even mock them in class,” Matoke said.

He said as a group, they often have to talk to teachers and see how they can end the stigma.

“It can be a challenge also because some teachers also perpetuate it by calling the children names. At that point, the relationship between the pupils and the teacher is severed. It becomes hate and the performance goes down,” the jigger ambassador said.

The group has been touring some schools to talk with the teachers on confronting the jiggers epidemic.

Their efforts are paying off as some parents have grown appreciative.

Matoke says once in a while, they stumble on someone they had helped before, as was the case on Sunday.

Matoke says leaders get rattled easily, especially when they see pictures of jiggered residents doing the rounds on social media.

“Some politicians feel like bolting whenever someone shows them a picture of frail pictures of their people with jiggers,” he said.

"A former MP almost fainted when a colleague in Parliament showed him pictures I had posted on Facebook. He called and gave me a tongue lashing on why I was embarrassing him and our people."

As a group, however, they will not be daunted. They vow to soldier on inch by inch.

In Kitutu Chache North and South constituencies in Kisii county, residents are posting many photos of those struggling with jiggers.

At Ngokoro in Kitutu Chache North, for example, more than 15 households have been struck by jiggers.

There are jiggered feet all over as you walk from house to house.

A few interventions were made by Ahadi Trust Kenya chief executive Stanley Kamau, but they were not enough.

Kamau says more than 3 million Kenyans are infested with jiggers, though statistics are hard to come by.

“That is about three constituencies, yet the country is yet to see it as an urgent matter,” he told the Star on the phone.

“These are villages scarred by not only disease, ignorance and poverty but also jiggers. The tragedy is that the administrators are deliberately hushing it up. It is a pity,” Matoke said.

The group has begun mobilising community volunteers to reach out to victims because of the vastness of the regions affected.

“We need concerted efforts if we are to do eradicate the problem,” Matoke said.

Martha Ogoti, a teacher who spares her time off over weekends to ‘dig out jiggers' in the villages, says pupils dropping out of school should not be seen in the context of Covid-19 alone.

Ogoti, who founded the Minto Anti-Jigger Campaign Group, said more and more children are leaving schools in droves due to jiggers.

She, however, regrets that little effort is being made to ensure they are brought back.

"This is a silent epidemic, and it is affecting hundreds of households,” the teacher said.

She has personally targeted more than 200 households in Kisii and Nyamira counties in the drive to scale back jigger infestations.

The challenge, however, is the finances. Ogoti says buying drugs and other provisions for the jiggers victims is taxing.

Moreover, they have had to deal with a tide of superstitions regarding the jiggers.

“We meet so many who believe that witches have something to do with their state,” she said.

The issue is about sanitation, which can be poor in some homes.

“Where villagers have embraced good hygiene, the pests have fled for good,” she said.

A change in mindset is also necessary. She gave an example where a jiggers victim’s wife was diagnosed with anaemia, and then he went to visit a magician, who told them she was bewitched.

“It takes more than removing the jiggers. We must also disabuse them of these wrong notions,” Ogoti said.