The honesty and work ethics of the Japanese rubs off on learners, say beneficiaries 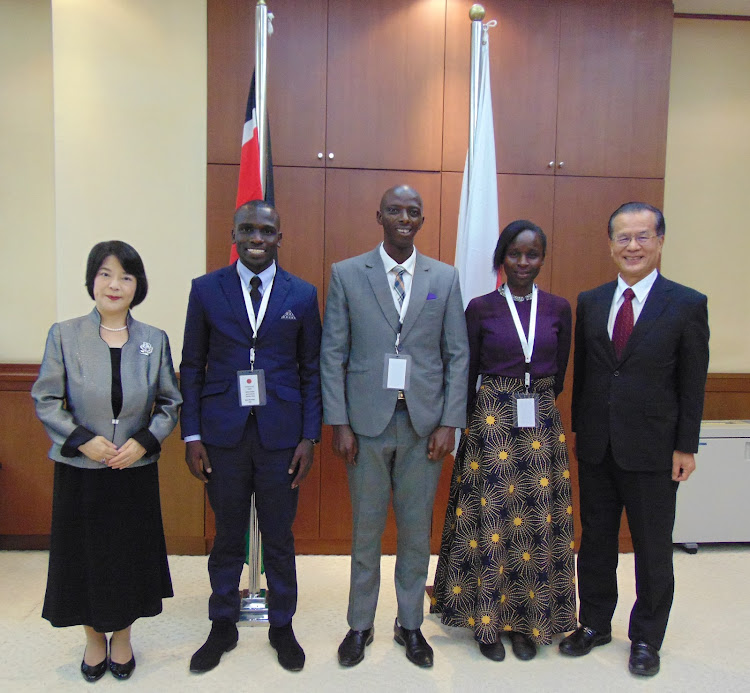 African time. There’s no hurry in Africa. These are some of the phrases sometimes used to describe many Africans’ seeming inability to keep time.

For Njeri Kagema, travelling to Japan in 2013 caused a shift in her worldview — from timekeeping to the importance of keeping promises and no tolerance for food wastage.

"Having spent a few years of my 20s interacting with Japanese, I can confidently say that my character was shaped by that interaction," she said.

Kagema is among the beneficiaries of fully funded scholarships by the Japanese government, which seeks to build human resource capacity for the development of the Kenyan society and economy.

She studied the Japanese language. Kagema said she learned the importance of keeping promises.

"Punctuality, too, is not negotiable in Japan. I try to be on time for my appointments, if not earlier than the scheduled time."

Kagema said she also learned the sacred value of food from the country, which discourages wastage.

She said gratitude and always demonstrating goodwill are values Japanese practise in their daily interpersonal relations.

"From that, I try to express gratitude as much as possible. These, among many other values, have been ingrained in my life thanks to living in Japan."

The Abe Initiative, a five-year plan in providing youths in Africa with opportunities to study for a Master's degree at Japanese universities and undergo internships, was launched during the fifth Tokyo International Conference on African Development (Ticad V), held in Yokohama in 2013.

The Abe Initiative is a bridge linking Japanese companies with Africa. More than 150 students have graduated in Kenya over the past five years.

The Mext scholarship, on the other hand, was established in 1954. Under it, more than 120 Kenyan students have received scholarships. 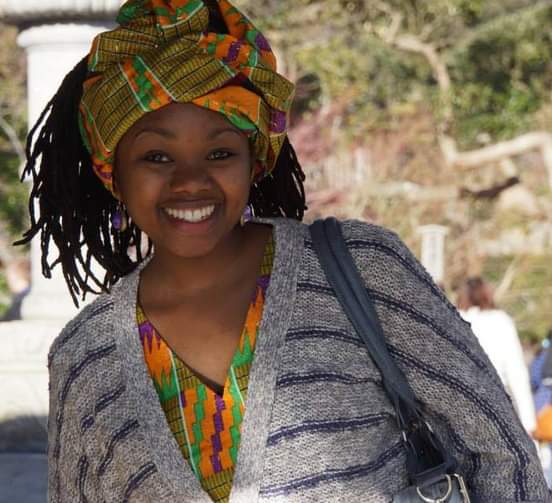 Japanese people take being on time very seriously. Learning this helped me be less of a procrastinator and do my work faster and on time

Kagema, an alumna of Akita University, having completed her Masters in Education, currently teaches Japanese at the United States International University-Africa.

USIU, located in Nairobi, Kenya, is one of the most cosmopolitan universities in East and Central Africa, with almost 7,000 students from across the globe.

Kagema has been the chairperson of the Japanese Language Teachers’ Association of Kenya since 2019.

She says some students earn from their Japanese language skills through offering interpretation and translation services, among others.

Reminiscing on her time in Japan, Kagema says, "Akita University has a strong support system offered to international students as they navigate education life.”

The support includes guidance on immigration procedures before and after landing, getting a residence card and a permit to do a part-time job.

Kagema also received help getting health insurance, opening a bank account and registering for utilities like gas, Internet and water.

In addition, Kagema’s academic adviser and research supervisor helped her settle down seamlessly.

"Through their efforts, I was given a laptop, a video camera, a voice recorder and a research room that had a fridge and a microwave, which came in handy when I had to spend nights in school doing my research."

Kagema said the Japanese professors go the extra mile to support students, a value she has adopted as her work ethic.

Kagema says the Japanese have a strong sense of teamwork.

"They value dantai shugi, a concept of operating as a group. This can be observed clearly in institutions of learning," she said.

Kagema said learners rarely raise their hands to answer questions from instructors, mainly because they are conscious of being conspicuous at the individual level.

However, putting them in groups always yields impressive results.

"This teamwork element is not just at the literal group level, but individually, every person is expected to strive to do their work as service towards the collective goal of benefitting humanity," she said.

Kagema advises students wishing to study abroad that they must be willing to learn the Japanese language and culture for a more fulfilling life with locals.

She says she integrated well into the culture, save for the onsen (public bath) culture, which she found shocking.

Another beneficiary is Prof Eng Bernard Ikua, deputy vice-chancellor for administration at the Jomo Kenyatta University of Agriculture and Technology.

Prof Ikua said the most outstanding thing he noticed while in Japan is the inculcation of teamwork at all levels.

"There is a strong belief in collective responsibility. The head of a team readily takes responsibility for the failure of any of the team members, and for this reason, no team member wants to fail the team, " he said.

"Another outstanding thing is the focus on details, however minor they may be."

He is researching and mentoring young researchers in the areas of precision engineering and manufacturing.

"Studying in Japan exposed me to cutting-edge technologies and facilities, which helped me to engage in research and have networks with researchers in Japan and other parts of the world, who are in my area," he said.

"The research culture in the university, which in part included interacting with other researchers and making presentations on progress every two weeks, shaped very positively my view and orientation in research."

Ikua said the culture, honesty and work ethics of the Japanese people had a great impact.

He said he learned perfection in anything can be achieved through persistence, hard work and determination.

"The aim is not just to meet the functional requirement but to do so with finesse and derive positive pride out of coming up with the best," he said.

"The philosophy that anything good can be made better through incremental improvement, however minor, was an eye-opener for me and has shaped me to focus on opportunities for improvement in all areas of my engagement, be it in engineering design, in production or in management."

Ikua said he learned that organisation and time management are critical.

"I learned a lot on self and group organisation as well as management of time. The start and end of every activity are timed and the set time is adhered to strictly. This helps in ensuring projects start and end within scheduled times. This shaped me a lot, and has made me conscious of time, even in managing meetings."

Ikua said he was amazed at how the environment is kept clean, and this is the responsibility of everyone, regardless of seniority.

"Over time, I became very sensitive about how I handle any waste," he said. 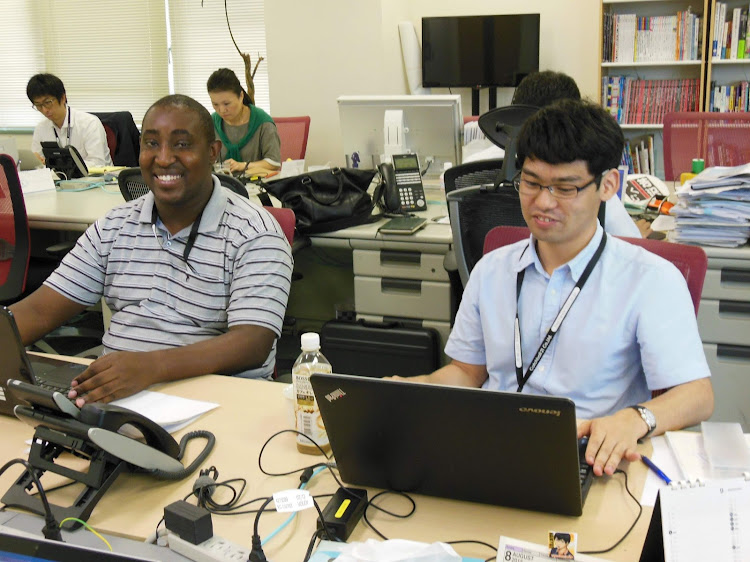 Another scholarship beneficiary is Victor Njoroge, who reiterated the concept of punctuality.

He said in Japan, you’d rather do a shoddy job than be late.

"Not that they do a shoddy job, but I just mean that Japanese people take being on time very seriously. Learning this helped me be less of a procrastinator and do my work faster and on time," Njoroge said.

Njoroge now works at the Japanese Embassy as a communications officer for the Japan Information and Culture Centre.

The JICC is the cultural section of the Embassy that publicises Japanese culture: food, fashion, pop culture, architecture, language and sports.

Njoroge is responsible for showcasing Japanese culture within schools and coordinating the Mext Japanese government scholarship programme with the team at JICC.

Njoroge said those who would like to pursue their studies in Japan must keep an open mind.

"Japan is not what we are normally used to. We are used to European and American culture because of the TV and music we consume. Do not be too settled in your ways and beliefs. Try and be flexible and tolerant on major issues," he said.

On language, Njoroge said, "You can survive in Japan only knowing English. However, if you really want to experience the true heart of Japanese society, you will need to learn Japanese. Language is culture. Once you learn the language, you’re halfway to understanding Japanese culture.”

He said learning in Japan has helped him become more tolerant of other cultures.

"I met students from different parts of the world, like Vietnam, Indonesia, China, Britain, Spain, USA and Mexico, just to name a few. Studying and working beside them helped me appreciate that there are many diverse worldviews, other than what I knew, on religion, work ethic and social norms,” Njoroge said.

The lessons he picked from the Japanese have helped him work well at the embassy, he says.

Njoroge said the most outstanding thing he saw in Japan was the culture of honesty and empathy.

He gave an example of when he sought insurance.

"As a student, I pay about half of the amount of the national insurance that is normally paid by everyone. I forgot to renew my student status to my local government and this resulted in them charging me double the insurance amount," he said.

Njoroge said a friend alerted him of his arrears.

"Once I was going to the local government office to explain my situation, they rectified the situation that day and in about three weeks, I was refunded about Sh30,000," he said.

"This was amazing because I did not have to convince anyone or plead with anyone. I just showed them my status as a student and even though it was my mistake for not informing them, I was still a student they still refunded me the money."

Njoroge said he initially experienced culture shock, Japan being the first country outside East Africa he had travelled to.

This included the time management aspect, adding that the Japanese do not take tardiness well.

From rural school in Kiambu to Obihiro University in Japan

Stories by the Star

What are Kenyans doing wrong? Students in Germany speak

We only need common sense to beat this virus, trio says

Living in the shadow of death in the UK

Lockdown has hit Kenyans like a ‘bad dream’, but they won’t give in to anxiety

Meet KCSE stars now shining in the US