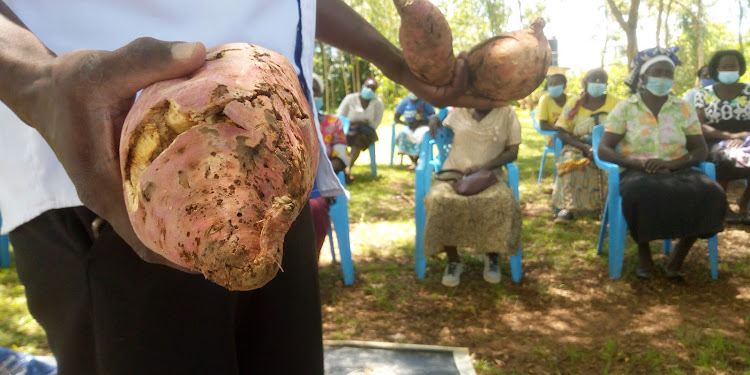 At the beginning it was very difficult, most of these children had very high viral loads but because of drug adherence and better nutritional value most [now] have low viral loads

In a county with high HIV and poverty indexes, a group of women health volunteers is making a difference, one sweet potato at a time.

Ayila Moyie is a group of 25 women who have been serving as community health volunteers in Siaya county since 2013.

They ventured into agriculture in addition to moving door to door with their health advocacy messages.

The CHVs say they are using one stone to kill two birds—they are using sweet potato farming to fight poverty and malnutrition among people living with HIV.

When the group from North Sakwa ward in Bondo subcounty ventured into sweet potato farming in 2018, it had one goal in mind: To provide balanced and wholesome nutrition to children under their care who were on anti-retroviral drugs.

Three years down the line, their focus is on expanding from providing nutritional support to selling excess produce to improve their own lives and that of orphans and vulnerable children under their care.

Ayila Moyie takes care of more than 1,500 OVCs, 307 of who are living positively and in need of nutritional support.

Mary Ndire, the lead CHV at Ayila Moyie, says a baseline survey conducted by non-state partner ARMUT in 2013 found that OVCs were malnourished and a good number could not get three meals a day.

“Most of our OVCs who are on ARV did not have food. Some were having a single meal or at best two. As caregivers, we had to ensure that the ones on ARVs not only adhere to drugs but also eat a balanced diet, which was a tall order,” she says.

Proper nutrition is an important element in the management of HIV patients’ immune system that serves to keep the viral load low.

Ndire says the introduction of sweet potato farming has been a game-changer in HIV management for those OVCs on ARTs.

“At the beginning it was very difficult, most of these children had very high viral loads but because of drug adherence and better nutritional value most [now] have low viral loads,” she says. 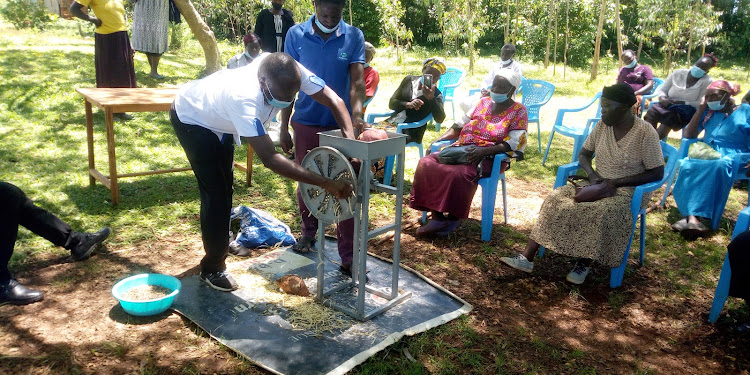 The CHV, who is in charge of 51 OVCs, says nutrients in the Kabode variety of sweet potato have been key in boosting their OVCs immunity.

The area’s weather is suitable for potato growing compared to staples such as maize and millet.

The group boasts of more than 10 acres of land under sweet potatoes and has harvested over 20 tonnes annually in the last three years for subsistence use and for the local market.

He explains that the Kabode variety is the most preferred by the group because it is rich in iron, potassium and phosphorus, which are good for the immunity of children under its care.

Achuti says owing to the group’s success, the sweet potato farming initiative has been cascaded down to other farmers’ groups such as Nyabenge, Stars of the Lake and Maseno.

With the help of a non-state partner, the group markets its produce locally and outside the county.

Achuti says given the county’s climatic conditions, Siaya has the potential of producing about 1,000 tonnes of potatoes annually that would earn farmers better returns on their investments.

He says there is little wastage in potato farming. Ayila Moyie, for instance, sells potato vines to other farmers, use rotten potatoes as animal feed besides selling the crop.

“Sweet potato farmers get maximum value for their crops. Nothing goes to waste, from vines to crops infested by insects, everything has a use. This has been made possible by adopting value addition techniques,” Achuti says.

Benta Anyango, Ayila Moyie CHV in charge of the potato farming project, says members can now borrow loans to educate their own children.

“We sell our produce collectively to have better bargaining power but individually we have records of what each one of us has produced in their farms. Whatever profit is made by the group is saved and members are allowed to borrow. This has enabled most of us who are widows to take our own children to school,” Anyango says.

Anyango says the group has been making other products such as chips, cakes, crisps, mandazis and porridge from potato flour which are sold to bring in additional profit.

The group acquired a machine that crushes spoilt potatoes turning it into animal feed, through the Agriculture department and with the help of a partner known as REFSO.

Anyango says members’ living standards as well as the lives of OVCs have significantly improved.

“As administrators we have a duty to ensure that our people engage in food production so that they do not go hungry. We encourage our people not to rely on maize only but to diversify into sweet potato farming for better returns.”