PRESIDENT TO THE RESCUE 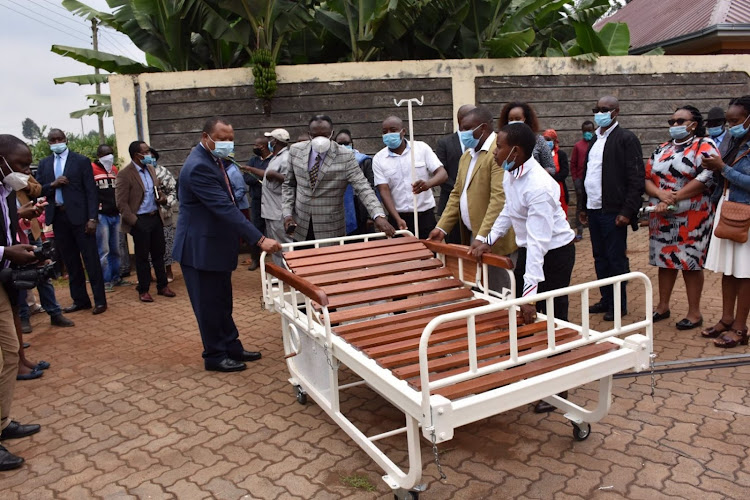 A sample of the ICU beds that were to be assembled by the duo
Image: FILE

When Mungai Gathogo, 26, and Joseph Muhinja, 35, started making standard hospital beds in their workshop, they knew hospitals were stretched to capacity and were sure to buy a few pieces.

They did not expect to sell a massive number all at once and certainly, they did not think the client would be President Uhuru Kenyatta.

Gathogo, a keyboard warrior, had taken to social media to market his products to potential buyers online.

“I did not expect my innovation to trend that far. When the President made inquiries about the beds and immediately promised to buy them, we were overwhelmed,” he said.

The two young innovators, who are based in Githunguri, Kiambu county, said the President dispatched the President’s Delivery Unit to Githunguri to assess the beds and confirm the viability of the order after the innovation that had been trending on social media was brought to his attention.

“PDU secretary Andrew Wakahiu visited our workshop and asked us how long we would need to make and supply 500 beds. He gave us the government tender and we were to deliver in 45 days,” he said.

We can demonise M-Pesa and stir up all manner of dominance claims but banks seem doomed.
Opinion
1 year ago

Gathogo said they approached their bank and took a loan to buy raw materials, which were all locally available, to make the hospital beds.

The beds were to be sold for Sh50,000 each, compared to almost double the price for the cheapest available import.

However, after making the 500 beds, the government went quiet and harassment began.

“Many months passed as we heard no word from the government. Some people who claimed to be in government visited a number of times, warning us to stop taking the grievances to social media,” Gathogo told the Star.

However, with a huge loan on their shoulders, the two did not relent.

“We kept complaining until eventually, Interior PS Karanja Kibicho visited and assured us the President had not changed his mind.

Gathogo said the President had asked Kibicho to pay back the Sh3.6 million loan to the bank and pay for the raw materials used in the production.

“The president asked us to treat the loan as a capital injection to the business. I was overwhelmed,” Gathogo said.

The two have since expanded their workshop and employed 40 youths.

On Wednesday last week, the government announced that it had bought all the 500 beds, which would be distributed across the 47 counties according to need.

It's a common grumble that politicians' lifestyles are far removed from those of their electorate. Not so in President Kenyatta’s world.

His charitable donations, which benefit poor people and small-scale entrepreneurs, have often gone unnoticed over the years, yet those actions have transformed the lives of many.

As a philanthropist, Uhuru has made multimillion donations to people he doesn’t know away from the public glare.

“These acts of kindness, big and small, speak to the generosity spirit of His Excellency,” said Kibicho, who has been the President’s “messenger” in some cases.

From helping postelection violence victims, to helping small-scale traders whose goods were destroyed in 2017 as result of contested elections, to helping random people who write to him, the President has spent his personal fortune to support them.

He posted his one-paragraph letter on social media and within hours, the President saw it and instructed his Ambassador to India Willy Bett to confirm the case.

Once the confirmation was done, the President sent Bett Sh3.5 million for Macharia’s medical bill. The young man was able to undergo a Vagus Nerve Simulator surgery at the Forties Hospital India immediately.

“No words can explain his kind gesture. May God bless him,’’ Ethan’s mother Veronica Njeri said.

On December 11, 2014, the family of a 44-year-old victim of the Mandera attacks from Muranga got a surprise relief after Uhuru paid his hospital bills at the Kenyatta National Hospital.

Last year, veteran radio personality Leonard Mambo Mbotela was admitted at the Nairobi South Hospital on October 29, 2020, and his bill had accumulated to Sh1.1 million.

No sooner had the appeal been made than a call came from the President’s secretary, requesting for the details of the bill.

“Within the same day, we received guests from State House who cleared the bill. They had been sent by the President,” said human resource manager Stephen Mutavi.

Kibicho told the Star the President does not like to publicise his acts of charity.

“He doesn’t like to talk about it yet he has spent millions of his personal money to take care of many helpless Kenyans,” Kibicho said.