FROM SAVIOURS TO HELPERS

The charitable side of KDF in Lamu as peace prevails

They came in as protectors, now give medical, education and relief aid

• While fighting al Shabaab is what brought them, KDF is now helping Lamu in daily life

• Along with other security units in Operation Amani Boni, they give humanitarian aid 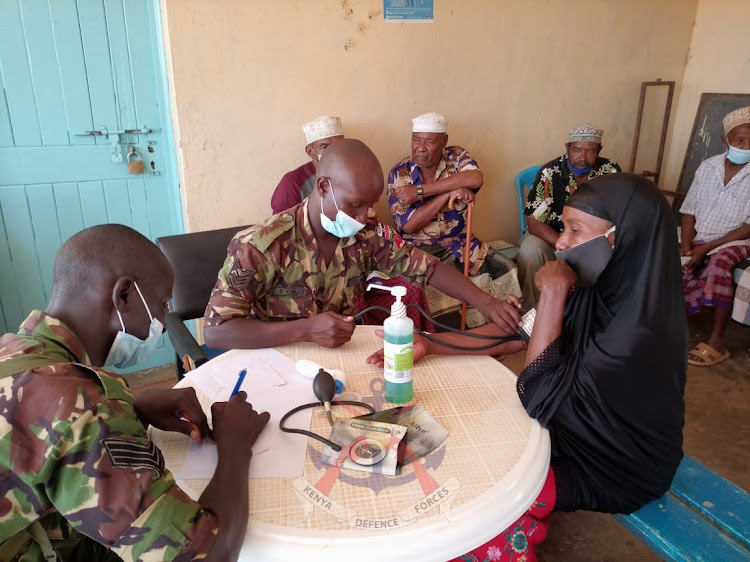 The story of KDF in Lamu has long been one of fighting fire with fire. A battle in Boni forest against an al Shabaab making forays from the hideout since 2014.

What many do not know is the humanitarian role played by the KDF and other security officers involved in the operation: the Anti-Terror Police Unit, the Rapid Deployment Unit and the General Service Unit.

Despite the dangers associated with their job and the fact that they are always on call, they have always found time to offer humanitarian assistance to various groups of people in need.

“Sometimes war does not have to be fought with the gun. Dialogue, too, can work wonders,” said a senior officer with the KDF, who declined to be named.

“Meeting people at their point of need is what we have been doing apart from our normal duties.”

In terror-prone areas in Lamu and other vulnerable counties on the Kenya-Somalia border, the KDF and other security organs provide medical, education and relief aid to these communities.

Since September 2015, KDF has been part of a multi-agency team conducting a security operation initially called the Linda Boni operation but now Amani Boni operation.

Their aim is to flush out al Shabaab militants in the Boni forest, commonly known as the Boni enclave. The militants have been launching attacks from there on Lamu and other parts of the Kenya-Somalia border.

After the 2014 attacks, several hospitals and schools in terror prone areas were shut down, but thanks to the improved security situation and presence of Operation Amani Boni (OAB) troops, they have now reopened.

In January, after seven years of shutdown, the government finally reopened all six schools in terror-prone areas in Lamu, much to the relief of the more than 500 learners from the Boni minority community. 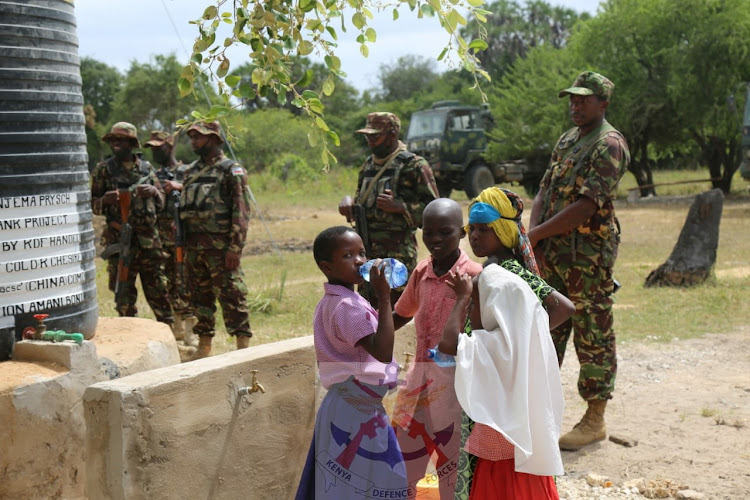 Sometimes war does not have to be fought with the gun. Dialogue, too, can work wonders

More than 10 teachers were airlifted by military and police choppers to their schools, and the learning institutions reopened immediately.

Since most of these areas are inaccessible by road, security personnel airlift teachers to and from the schools.

Health centres in these terror-prone areas had also been shut after they were vandalised and looted by the militants.

The Bargoni and Kiangwe health centres have since been reopened, with plans in top gear to reopen the Mangai, Bodhei and Milimani facilities before the end of the year.

While these dispensaries were closed, residents received free medical care from troops, with camps set up close to the villages.

During emergencies, KDF and National Police Service helicopters have always been available to transport the sick to King Fahad Hospital in Lamu.

A case in point was the eventual successful delivery of a baby by a pregnant woman who had developed complications at Kiangwe village on the night of November 16, 2019.

Community leader Abdi Ware said the woman had been in labour for more than four days and had not received medical attention. She was rushed by helicopter to the King Fahad Hospital, just in the nick of time to safely deliver her twins.

“We informed KDF of her situation and they chose to do all in their ability to save her life and that of her babies,” Ware said.

“We have had many other similar or worse scenarios, but we are glad that KDF has always rescued us. They have left a mark in the lives of those they helped.”

Communities enjoy many benefits from various civilian-military cooperation activities, which has greatly improved the relationship between KDF and the larger security fraternity and local communities.

The troops have equally sunk several boreholes and dug up water pans to assist locals in areas prone to drought.

Elder Nuri Salim of Kotile said, “We have the boreholes at Korisa and Kotile, and water pans at Kiunga, Sangaillu and Bulla Rahma in Lamu East.”

During the perennial floods that affect many parts of the lower Tana as well as Lamu West, security forces are a shoulder to lean on, providing fresh water, food aid, medical support as well as transport.

In June 2019, while communities were camped at Danisa and Kijo camps after their homes were marooned by floods, KDF personnel did not only make humanitarian donations but also took part in the war against Covid-19 by fumigating the camps.

They also donated thousands of masks and sanitisers to the affected communities. 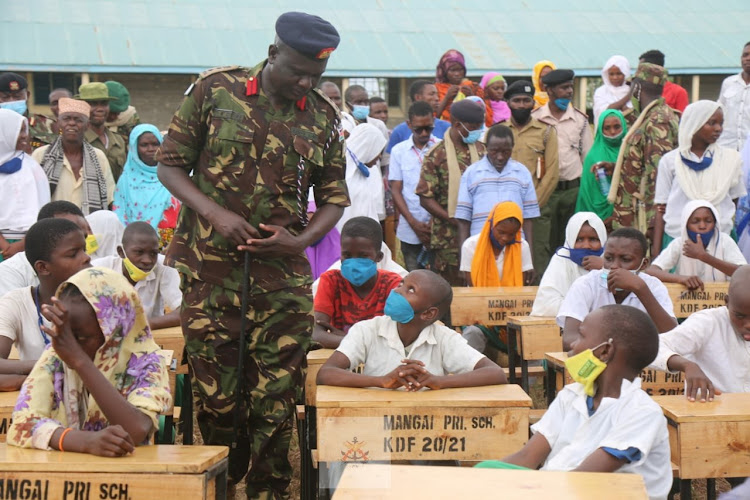 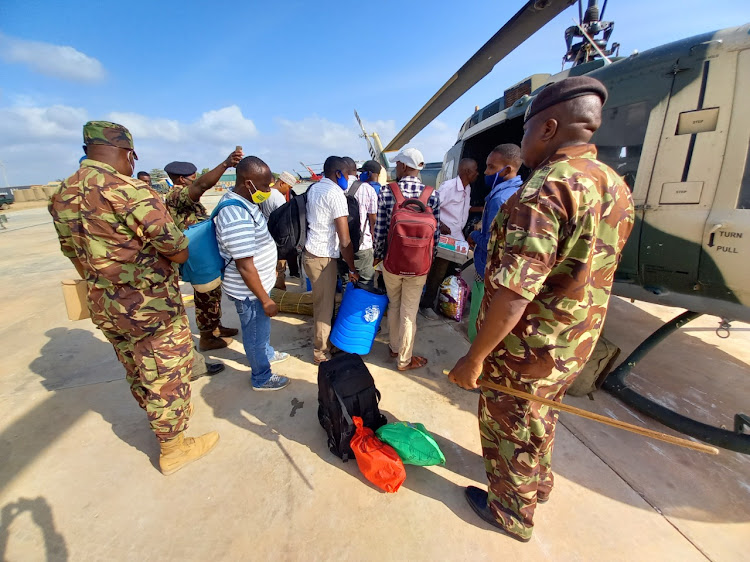 Thanks to the security presence, residents now enjoy a safer environment, an opened-up trade space, employment from county government as well as at national projects, and general improvement of service provision.

This infrastructure project envisioned under the government’s Vision 2030 is expected to host one of the biggest ports in Africa, paving way for further opening up of the region as well as development.

Construction of the Lamu port is in progress, with three massive berths completed, and the population has gained significantly from the project.

The Kenya Ports Authority expects the port of Lamu to attract some of the cargo that would traditionally pass through the ports of Sudan, Djibouti and Mombasa.

The traffic forecast for Lapsset corridor predicts that, inclusive of demand from South Sudan and Ethiopia, the Lamu traffic will reach 23.9 million tonnes by 2030.

Thousands of people are now employed at the project, and once done, more will be employed by the port authority, shipping companies and Kenya Railways.

“The construction of this project has heavily benefited from OAB, with troops securing the facility both on land and at sea and securing roads, ensuring construction material keeps arriving,” the KDF officer said.

The Lamu port has also influenced the increase in road network. Currently, the Mokowe-Minjila road that plays a crucial role in connecting Lamu, Tana River, Kilifi and Mombasa counties is at 90 per cent complete, with more than 100 kilometres out of 132 already tarmacked.

With the support of OAB security personnel, contractors and their employees are safe and free to carry out their tasks without looking over their shoulders for militants.

This road is expected to hasten movement of farm produce, people and influence further growth of centres like Witu, Mpeketoni, Minjila, Mokowe and Hindi. 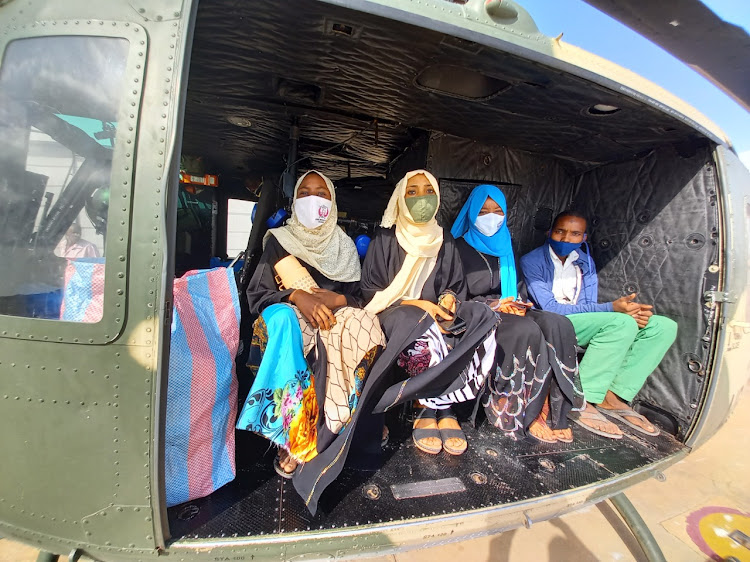 Teachers and learners board police and military choppers ready to be airlifted to Boni schools
Image: CHETI PRAXIDES

Before devolution began in 2013, Lamu county and the larger Boni enclave was a quiet, under-developed and marginalised area.

It then became a target for al Shabaab militants and seemed doomed to remain undeveloped.

“The intention of the attacks was to create fear and scare people so the region lags behind in all aspects,” said the senior KDF official.

However, thanks to the intervention of the army and allied forces, this tale has changed drastically over the years.

Peace was restored in Boni, with the area opening up to trade and more movement as well as increased productive land use.

Al Shabaab militants targeted Mpeketoni and its environs instead to ensure the county stayed isolated from the rest of the country. However, this was similarly overcome by the army.

Thanks to efforts by various security agencies, enough peace has been restored to allow Lamu and other counties in the Boni enclave (Tana River and Garissa) to flourish.

As a result, mega projects have been carried out, while tourism and trade have experienced a massive growth. Agriculture has blossomed and government services have trickled down to the public.

All in all, the presence of the KDF has influenced heavily the positive direction that the Boni enclave is taking to ensure Lamu and the larger Kenya stays safe.