They are on the ground daily and already on county payroll, hence useful

• There are 24,000 county inspectorate officers in Kenya, otherwise known as 'kanjo' 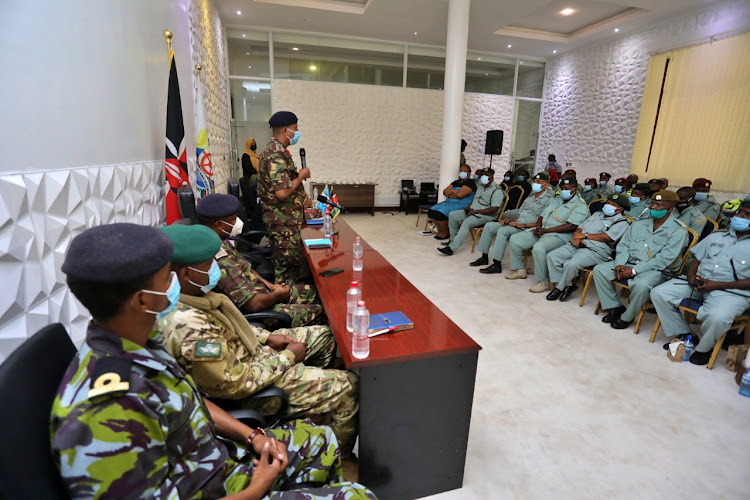 The dreaded county askaris are known for their ruthlessness in dealing with hawkers in the CBDs of Nairobi, Mombasa, Nakuru, Kisumu and other major towns.

They are known for demanding bribes, carting away belongings of traders who are found on the wrong side of the law and demolishing properties erected ‘illegally’.

However, they are now being trained on more sophisticated operations. The Kenya Defence Forces is involving them in the war on terror and violent extremism.

The KDF believes county askaris are instrumental in the day-to-day security operations of any country because the ‘Kanjos’ have basic training on security.

The army is working in conjunction with 12 county governments. These include Mombasa county.

In 2013, Governor Hassan Joho’s administration was accused of recruiting ‘mateja’ (drug addicts) into the Inspectorate department. However, it has since employed PHD students, Master's graduates and several ex-GSU officers.

The unit, which boasts of 500 well-trained officers, is now trusted for its professionalism, says Ilhan Abbas, the acting Devolution chief officer.

At least five counties, including Taita Taveta, have sent their inspectorate officers to Mombasa county to be equipped with modern skills.

“Many people do not know that within the Mombasa County Inspectorate department, we have all cadres of people,” Abbas says.

“We have PHD students, Master's and Bachelor's graduates and even ex-GSU officers. You cannot imagine seeing a graduate in a county askari's uniform, right?”

She says these graduates and former police officers are the ones who have been changing the image of the Inspectorate department.

“They (graduates of ex-police officers) have been employed in senior ranks and managerial positions to offer leadership,” Abbas says.

She says they have now partnered with the Kenya Defence Forces to train their members on how to counter terrorism and extremism. 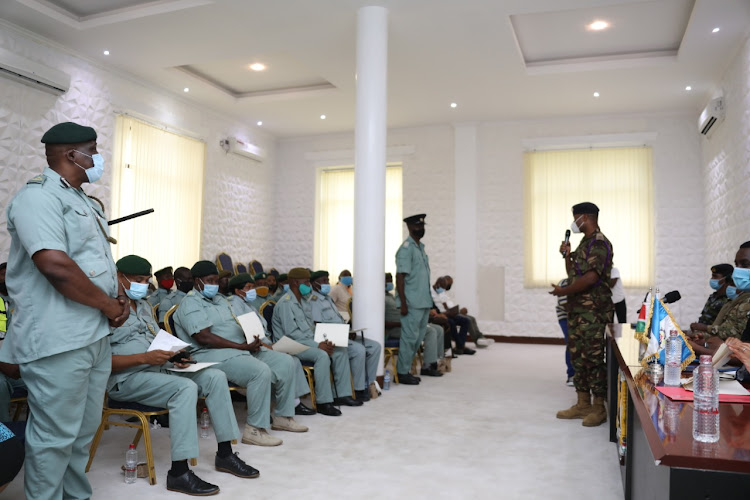 Instead of recruiting new people, the county askaris came in handy because they have discipline and basic security training. They live within the estates and locality and, therefore, can pick any suspicious incidents

Between 2013-15, the coastal town of Mombasa was prone to terror attacks.

Old Town, once a booming tourists’ attraction centre, had become a no-go zone for tourists and non-locals. A number of international tourists were mugged and killed.

Elsewhere, the famous Masjid Musa in Majengo became a recruitment and training centre for youth into radicalisation beliefs, according to government intelligence reports.

Several sheikhs who were preaching in that mosque, including the late Aboud Rogo, were later killed by unknown gunmen. Majengo youth blamed the police for their killings.

Every Friday, Majengo would become a war zone as police engaged the youth in running battles.

The mosque had to be shut down over terror-related allegations. However, it was opened later on after a security meeting was called between senior mosque officials, the county government and security heads in the region.

Terrorism had become a major headache in Kenya. Security apparatus were grappling with how to deal with it.

Col Rashid Harun, KDF Head of National Counter-Terrorism Centre,  says during that time, the government allowed the terrorism propagandists a lot of time to spread their falsehoods.

“If we had acted swiftly then, we could have stopped their propaganda,” he says.

He says the idea of using the county inspectorate officers to fight terror and extremism was reached at after many days and hours of consultation.

The national government has invested heavily in intelligence and the county inspectorate officers are among the people who are on the ground on a day to day basis.

Col Harun said it was easy to recruit county askaris because they are already in the payroll of the county government, so it will not be a burden to the national government to start looking for funds to pay new staff.

KDF and the National Counter Terrorism Centre have trained about 240 ‘Kanjos’ from Mombasa, Kilifi and Kwale on how to counter radicalisation, extremism and terror.

Late last year, even as Covid-19 was ravaging the country, KDF and NCTC officers were in the three counties of the Coast to train the county askaris on violent extremism and terror.

Col Harun says the county inspectorate officers can play an important role when equipped with the necessary skills.

He says they have the capabilities to help in preventing juvenile gang crime, radicalisation and extremism and even bust terror plans.

The senior KDF officer says there are about 24,000 county inspectorate officers in the 47 counties of Kenya, whose capabilities can be put to good use to deter cases of terror within their jurisdictions.

“Instead of the government recruiting new people, the county askaris came in handy because they have some sort of discipline. They (inspectorate officers) live within the estates and locality, therefore can pick any suspicious incidents,” Harun says.

As a pilot programme, KDF has trained some 40 county inspectorate officers in Mombasa, another batch of 110 in Kilifi and 90 in Kwale under a programme called Security Sector Counter-Violent Extremism.

Two weeks ago, Col Harun presented a graduation certificate to the 40 Mombasa county inspectorate officers who were trained last December.

He says they trained the county inspectorate officers on how to establish terror threat scope, radicalisation agenda, characteristics and the modus operandi of radicals, and the language and symbols they use.

“There are a lot of symbols, slogans, dress codes and ideological characteristics that radicals use. These officers can now identify all these,” Harun says.

The programme targets 12 counties which have experienced terror-related activities or have active ongoing terrorism, violent extremism and radicalisation.

“These counties are very key because six of them have recorded the highest number of people who have crossed to Somalia or have reported incidents of radicalisation,” he says.

The colonel says Wajir, Mandera and Garissa have active militants who live among the community.

“These counties are very crucial to us because al Shabaab activities have been recorded in them in the recent past. Boni forest is also crucial because we have active KDF operations,” he says. 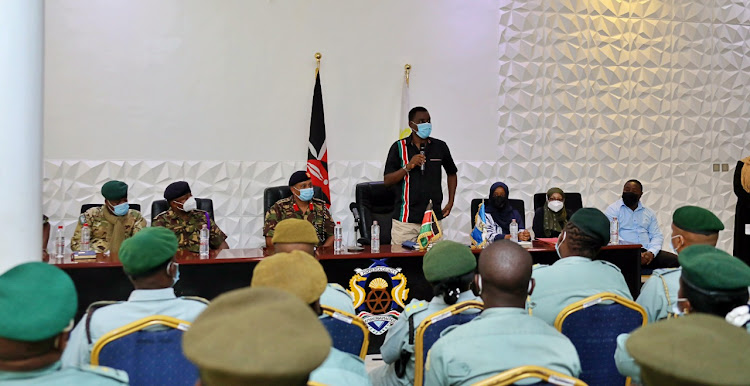 The head of NCTC says they have also equipped the ‘Kanjos’ with skills on cyber security.

“We have trained them to identify hostile sites within the Internet, how to use phones, how to be cautious in the cyber space,” he adds.

The senior KDF official says they will eventually open information centres in the counties, where KDF will be working together with county askaris.

“The whole idea of an information centre is that whatever the county askaris will be collecting on the ground, they will be sharing with us,” he says.

Col Harun, who has worked with the Department of Military Investigations for over three decades, says they will use the information brought in by the county askaris to follow up on suspect cases of terror or extremism.

“The security apparatus (KDF) will be able to liaise with county askaris in these information centres for the purpose of exchanging information and building up cases,” he explains.

On how to analyse the terror threat scope, the county askaris have been trained on radicalism messages, what radicals look for, their dress code and other skills.

“We have trained them on radicalism agenda, what to look for in suspected radical messages, what are their characteristics and their modus operandi,”  Harun says.

He says the trained county askaris in Mombasa, Kilifi and Kwale can now identify all these and report back to them.

“For the first time, based on our experiences in fighting al Shabaab militants in Somalia, we are telling these officers to be vigilant for certain things. If you see these behaviours, then you should alert us. The whole idea is to increase our eyeballs and ears on the ground,” he says.

The colonel says apart from training county askaris, they have also been working with youth groups, madrassas and mosques.

He says al Shabaab militants had infiltrated the madrassas and mosques and driven in their extremist agenda.

“We are now countering al Shabaab propaganda with facts. We are showing them (youth in madrassa) what al Shabaab are doing in Somalia,” Harun says.

In Somalia, the KDF has sunk more than 1,700 boreholes, constructed some roads and ensured the safety of millions of Somalis.

Col Harun says for the last 10 years the KDF has been working under the African Union Mission in Somalia (Amisom), they have escorted more than three million livestock from one point to another within the war-torn country.

“Within Somalia, al Shabaab militants have established Zakat points, where they take away livestock from pastoralists who want to export them."

Zakat is an Islamic finance term referring to the obligation an individual has to donate a certain proportion of wealth each year to charitable causes.

“At one Zakat point, a trader has to surrender a certain number of livestock. By the end of his journey, the traders are left with very few animals. Therefore, they have been coming to KDF to help them escort their animals,” Col Harun says.

He says the Somalis are now moving freely.

“This is the kind of information our youth need to know before they are misled by the al Shabaab propagandists.”