If left unchecked, infestation can lead to deaths 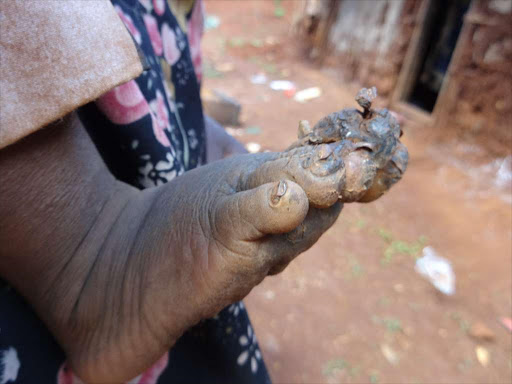 A photo of a foot infested with jiggers
Image: FILE

Though growing into an epidemic, jiggers infestations in Gusii villages are spoken about in hushed tones.

Jiggers can be a menace, robbing victims of the physical and even the intellectual vigour to be of any economic good to society.

At the marketplace, for instance, women infested by the pests hardly sell their goods.

And at the schools, children nursing jiggers often fail to assimilate with classmates, affecting their performance.

For others, it is a journey to the grave.

A growing number, however, are getting rescued thanks to the philanthropic efforts of groups like Compassionate Heart Ventures, led by Patrick Matoke, and Minto Anti-Jigger Campaign, led by Martha Ogoti.

The groups have to wade through hate from politicians, who brand them evil ambassadors.

Kisii and Nyamira could be accounting for two per cent of the more than 3 million nursing jiggers victims in the country, though the estimate is hard to verify.

However, not even chiefs speak about it aloud. One chief said sometimes, they take the cue from politicians, who want the matter kept under the lid.

Matoke, the 'Anti-jiggers ambassador', says these are some of the challenges they had to deal with.

He is only aged 30, but for more than six years now, he has been wading through the villages in Nyamira and in Kisii to assist the jiggered.

He said theirs is like a dot in the ocean, but it is better than nothing.

"Often times, it is friends touched by the pictures of the pitiful souls trapped in this plight who come to our aid, contributing the few resources that help us reach out to the victims," he told the Star.

"At times, we have to dig deep into our pockets to assist."

He recounts times in his childhood when he walked barefoot, scaring passersby off the path with his jigger-infested feet.

"This is not just a passion. I did grow up myself in a family where my feet were eaten up by the pest," he told the Star.

Theirs is a transformative approach: they not only remove jiggers but also build new units for those affected.

Martha Ogoti of Minto Jiggers, also a teacher who has been battling the pests, is worried of increasing school dropouts due to jiggers.

With declining revenues, the battle by such philanthropic groups is greatly affected.

“It is high time the government dedicated a portion of health funds to help reach out to such people. Let them not be neglected,” Ogoti said.

Matoke says without proper political support, their efforts cannot do much.

“Let society arise and confront this pests before they become a pandemic. Nobody succeeds in hiding a pregnancy. And just like it, we may ignore this for a while but soon, we will be dealing with a pandemic,” he told the Star.

"Jigger infestations are scars silently borne by so many people. The worst part is that some people feel it should be swept under the carpet."

The groups say people should be educated on hygiene if the jigger menace is to be eradicated. They also want governors to speak openly about it.

"Let nobody be left out, including the county bosses. We all have a stake,” Matoke said.

“The victims’ homes should be thoroughly fumigated and animals that may be carrying the fleas should also be treated,” he said.

Moreover, he said, victims and their families should be educated on the need to observe hygiene, and wearing shoes should be encouraged to ensure the flea does not find entry into one's feet.