• Five years later, it has not yet materialised, leaving them with produce but no market 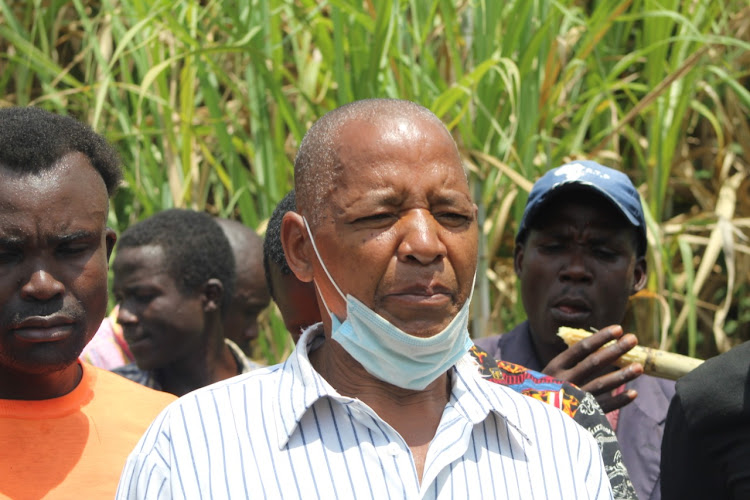 Like many farmers, John Osoro was keen on opportunities to boost his income. He used to rely on maize at his farm in Nyangancha, South Mugirango, Kisii county.  However, the crop was not economically sustainable.

The news of a proposed sugar factory at Nyangweta forest, therefore, came to him as a godsend.

"Maize was plunging me into losses," he said. "That is why the news that a sugar factory was being set up jolted me into sugarcane farming."

Today, however, he says the old days were better. What he had thought would be his economic saviour is slowly turning into a curse.

For five years since the county administration told them the sugar processing plant would be constructed, there is nothing on the ground to show for it.

"The forest is still intact, no grader has been on site," Osoro said.

He now clutches onto hope, just hope, that perhaps the project will start soon

Martha Onsarigo in Etago is in the same boat. She had also gone ahead to hire fields, where acres of her sugarcane now stand.

The cane has since matured, with no ready market in sight. "I had begun processing jaggery but still it will take me long, possibly a year, to finish the entire farms," Onsarigo said.

County executives  spoke glowingly of the proposed factory. When I went back to my house, I told my wife it is time we shelve maize production and move to sugarcane farming

A visit to the larger South Mugirango region shows a marked transformation at the farms, which six years ago only had maize and scattered cane farms.

Many of the peasants who dot the ridges share the same story of desperation and betrayal.

Osoro told the Star at one of his farms that he regrets banking all his energy on a political promise.

"I remember when the county executives came to Nyangweta with big cars. One after the other, they spoke glowingly of the proposed factory," he recalled.

"When I went back to my house, I told my wife it is time we shelve maize production and move to sugarcane farming."

He said they were told it would take three years for the plant to be set up.

"We did quick calculations that we can begin small then expand the scope to other fields as we look forward to the factory to begin purchasing from us. Today, when I go to the site where those meetings were held, I cry," Osoro said.

"I go to Nyangweta, where the governor told us an investor was breaking ground, and here I hold my chins in dismay. It was all a political hoax."

Like hundreds of other cane farmers in the vast South Mugirango region, Osoro queried why the Indian investor who was paraded before them has not set foot on the site to begin construction if the promise was genuine.

The farmers now say the wait for the plant is long overdue. Others lament the high cost of transporting their produce to factories in the neighbouring counties of Narok and Migori for processing.

They are forced to cough up up to Sh2,000 to deliver cane to the factories in Trans Mara and Awendo towns, compared to the Sh300 they would pay if the factory was to start operations in South Mugirango.

Bad roads exacerbate the situation, adds John Getuma, who, like Onsarigo, had ditched maize for sugarcane. "I think we deserve better than empty promises. Don't we?" he said.

We have already signed the memorandum of understanding with Kanoria Group of Industries, they are committed to this project as well

Area MP Silvanus Osoro says farmers should be assisted to realise their aspirations.

"I also attest that the promise to set up a factory was there. The Senate had even given the green light to the project. What became of it after that, I don't know," he said in a phone interview.

The county administration says the investor has long identified and will start work soon.

Governor James Ongwae says all the paperwork has already been done and it is a matter of weeks for work to begin on site.

"We have already signed the memorandum of understanding with Kanoria Group of Industries, they are committed to this project as well," the governor told Star in a recent interview.

The plant could cost the firm a staggering Sh2.4 billion. "Once complete, it will provide jobs to dozens of unemployed youth across the region," he said.

However, the farmers say they are already in a mess.

"Look at my farms, the canes have matured, they should be crushed by now and allow others to sprout. Should I keep waiting or uproot them?" asked Thomas Nyamweya, another farmer.

He said the factories in Trans Mara and Migori first consider farmers near them before they decide to come for others in South Mugirango.

"The roads themselves are a disincentive. No investor would want to squander his earnings repairing machines now and again. They need good roads as much as they are heavy machines. Breakages are expensive to repair," he said.

Why rural shopping centres are dying

At least 5,000 metric tonnes of cane would be processed per a day when the proposed plant is established.

It would be able to produce 172,500 tonnes of sugar annually, according to the governor.

Area MP Sylivanus Osoro says it is time the county showed sufficient commitment to ensure the industry is built to alleviate the farmers' woes.

"Our farmers have the determination and the resilience to go through challenges, but we should not capitalise on this to weaken them," he said.

"Agriculture is devolved, effort should be directed to empowering them."

He said while jaggery production can be done from sugarcane, proper realisation of profits by the farmers comes from selling it to sugar factories.

"And selling it to factories that are far costs them a fortune. That is why the cry for the promised sugar factory."

Currently, the Kisii region produces more than 266,000 tonnes of industrial sugarcane from the more than 3,500 hectares that is under sugarcane cultivation.

More farmers from outside South Mugirango are already warming up to cane farming.

But with the delays in the factory’s construction, the anger among the farmers is palpable.

Many say it has has been a long and painful wait. "If the investor was serious, we could be processing the first or even the fourth and fifth harvests from our farms,” said Osoro, another bitter farmer.

"Today, however, we are still forced to depend on Sony and Trans Mara sugar factories, which are very far."

He said farmers' hopes were raised when the Senate approved the project, but nothing came of it.

"We were told that the government had granted permission for the Nyangweta forest land to be hived off for the project, but that is the last I heard of it," he said.

MP Osoro said the governor had similarly promised that his government would construct a soapstone factory in Tabaka.

He said this should be realised alongside the sugar factory.

"It should not be that our people are being fed with one lie after another and life continues," the legislator said.