They were nearly giving up hope when fund gave Sh6,000 a month

• Most TB patients could not fend for their families due to sickness, loss of livelihood

• Patients under Amref Health Africa and Kanco get Sh6,000 a month for food, upkeep

She looked frail, tired and weary. She is only 30 years old, a mother of one, but she can easily be mistaken for a woman who has been around for so many years.

I knew Millicent Anna during her days in primary school. She was a bubbly girl, a favourite of many teachers and boys around the school because of her beauty.

After so many years of not seeing each other, as fate would have it, I met her last December. She did not immediately recognise me, maybe due to the face mask I had on, or that I had grown into a ‘big’ man.

I had not anticipated to meet her in this condition. Anna is battling tuberculosis. We went to her single-roomed rented house in the sprawling slum of Maweni in Nyali constituency.

Amref Health Africa and the Kenya Aids NGOs Consortium (Kanco), through support from the Global Fund, have been running a campaign to help TB patients and Community Health Workers by sending them a monthly stipend during this time of Covid-19.

I met Anna through this programme alongside other journalists and a Kanco official.

A trained salonist, Anna says at first she did not know she had contracted TB. Around March last year, when the country had just reported the first cases of Covid-19, Anna developed a persistent cough, which she believed would clear after some time.

“I have gone through hell,” she begins her story. Her daughter, oblivious of what her mother has been going through, kept interrupting our interview. She kept moving from one place to another, trying to catch our attention.

“I started with a small cough, went to several hospitals and chemists to try and get medications. It did not help, until I noticed some blood stains on my sputum,” she says.

Most of the time she became fatigued and could not continue working.

“One day, while working on my client, I became so weary and collapsed,” she says.

She went home after taking a few tablets from a nearby chemist.

Her husband, a boda boda rider, took her to a private clinic in the locality and soon she was feeling better and resumed her work.

However, in June, as Covid-19 ravaged the country, the Mombasa government ordered the closure of all salons and barber shops. A national 7pm-5pm curfew was also in place.

This meant her husband could not get enough money from his boda boda business because of curfew and most of his clients were working from home.

Anna’s single source of livelihood, the salon, had also been closed. “It reached a time I could not raise Sh700 for medicine,” she says.

SURVIVING TB Dr Lawrence Tanui, who is in charge of TB and Leprosy in Kwale County during the interview in his office
Image: CHARLES MGHENYI

On August 20, Anna went to Kongowea Dispensary after she noticed the cough was still persistent and her daughter had also started coughing.

“We were both tested and I was found to be TB positive. My daughter was, however, okay. We were placed on six months medication,” she says.

On reaching home, she found that the landlord had already kicked them out.

“I had received bad news about my health. At home, we had been kicked out. Where will I start from?” she wondered.

A lady friend of hers took her to her cousin’s house, where they were given a room that acted as a store to stay there until December.

“January is here, I do not know what will happen to us,” she says.

Nyawa says he started coughing in November 2019, while working as a butcher in Ukunda town.

“However, I did not go to hospital immediately. I thought it was a normal cough that would clear within some days,” he says.

In January last year, he went to hospital and a sample of sputum was taken for testing and unfortunately, it came back positive for TB.

Zuwa Nyawa during the interview in Kwale
Image: CHARLES MGHENYI

He was found positive with the Multi-Drug Resistant (MDR) TB and placed on 18-month medication.

Health experts say MDR TB is caused by an organism that is resistant to at least isoniazid and rifampin, the two most potent TB drugs.

“I have been taking my TB drugs from February. It is now 10 months since I started using the TB drugs and I now feel much better,” Nyawa says.

The father of two had to return to his rural home in Kinango after the MDR TB diagnosis because he could no longer work.

In March, Covid-19 struck and things changed from bad to worse. He could no longer provide for his family and for this reason and fear of infection, his wife and children had to leave for their maternal rural home in Kinango.

However, in May, when he was about to give up, his doctor informed him of donor support from Amref Health Africa and the Kenya Aids NGOs Consortium (Kanco).

“I was asked to register my details and told that every month, I would be receiving Sh6,000 for upkeep during the period I was under medication,” he says. He also gets a daily supply of medication.

“I had lost weight and could not walk for long distances. Therefore, I was asked to stay at home as I got my daily supply of medication delivered at my place.”

Nyawa says when Covid-19 struck, he was hell-scared and confused because TB has almost similar symptoms with those of coronavirus (lingering cough, fever, fatigue).

“I was afraid my neighbour would isolate me because of the daily coughing, confusing my condition with coronavirus,” he says.

Nyawa cannot explain how he got TB, but he believes that working as a butcher in Ukunda could have exposed him to the highly infectious disease.

However, according to the World Health Organisation, economically poor and vulnerable groups are at greater risk of infection with tuberculosis compared with the general population because of overcrowded and substandard living or working conditions. 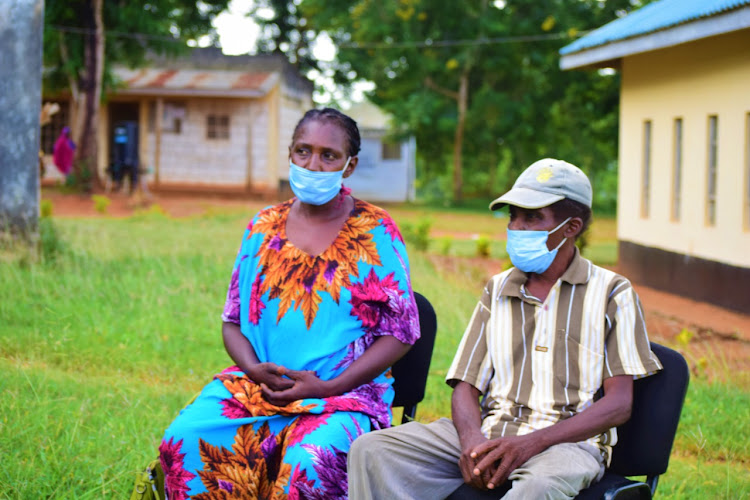 At Kikoneni Dispensary, deep in the border town of Lunga Lunga in Kwale, we met Pius Mbuvi and his wife Alice Mwikali. They are both TB patients.

Mbuvi sat pensively under a tree, perhaps trying to figure out how he can fend for his family during this time of increased cases of Covid-19.

This is the second time in two years Mbuvi is sick with TB. He was first diagnosed with the infectious disease in late 2018, and he took the TB drugs for six months before he was declared TB-free.

However, in October last year, he was back to the hospital with the same infection. He has now taken the drugs for two months.

“I have a challenge in taking the drugs, they affect my diet. I lose appetite. Sometimes, I’m forced to skip the drugs so I can at least have a meal,” he says.

However, doctors said the TB drugs do not affect patients’ appetite. Even though Mbuvi did not mention it, doctors at Kikoneni Dispensary said he is battling with alcoholism, the reason behind his poor feeding behaviour and lack of adherence to medication.

Mwikali, who in 2018 was the one taking care of her sick husband, is now also a TB patient. However, she cannot explain why her TB is different from that of her husband.

She has been diagnosed with the multidrug resistant (MDR) TB. Mwikali says she first had fever symptoms that led to vomiting and coughing around March 2020, just when the first case of Covid-19 was being reported in Kenya.

She was jittery that she could have been infected with the novel coronavirus.

Mwikali is enrolled in the stipends programme, while her husband’s application is pending. While she gets Sh6,000 a month, they are largely depending on well-wishers and their savings to survive during this period when Covid-19 has ravaged the nation.

“We can no longer go to the farm,” Mbuvi says. “Our children are at home. We largely depend on our food reserve from the previous harvest and well-wishers.”

Margaret Dama, 52, a mother of four, is a TB champion in Kwale county. She is the one who has been visiting Nyawa, Mbuvi’s family and a host of other TB patients in Kwale region, encouraging them to adhere to medication and doctors’ advice.

She has been a Community Health Volunteer since 2018 and is affiliated to Kinango Subcounty Hospital.

“We go round the region, collecting sputum samples from suspected TB patients and taking them for testing,” she says.

She is supposed to visit at least three hospitals and have four community engagements on TB every month, according to her job description as a TB champion.

Due to the risk involved in handling samples from suspected TB patients and interacting with many people, Dama has to test for TB every six months.

She gets Sh4,000 stipend from Amref and Kanco to facilitate her movement in Kinango.

Dr Lawrence Tanui, who is in charge of TB and Leprosy in Kwale county, says every year they register at least 1,200 TB patients in the region. However, this number went down during the Covid-19 period.

“This was largely because patients were afraid of coming to hospital because of Covid-19 and the stigma around it,” Tanui says.

In June and July last year, Amref Health Africa and Kanco did a survey on impact of Covid-19 on the TB epidemic in 89 countries.

Rahab Mwaniki, the campaign manager at Kanco, says 50 per cent of people interviewed said they had trouble accessing medical services during Covid-19 pandemic.

People with TB also reported experiencing increased stigma due to the similar symptoms of both respiratory diseases.

While most people with TB were given additional medicines to continue treatment at home, they expressed a clear and urgent need for immediate non-medical support, including nutritional, economic and psychosocial support.

Most people with TB surveyed in Kenya receive treatment in public hospitals (56 per cent), followed by public clinics (28 per cent), and private hospitals (13 per cent).

Only 3 per cent obtain TB care in private clinics, and 0.6 per cent sought care in an NGO or charity clinic.