As of Tuesday, the county had 331 cases, second only to Nairobi which had 470.

• Movement into and out of the area was banned following a spike in cases. 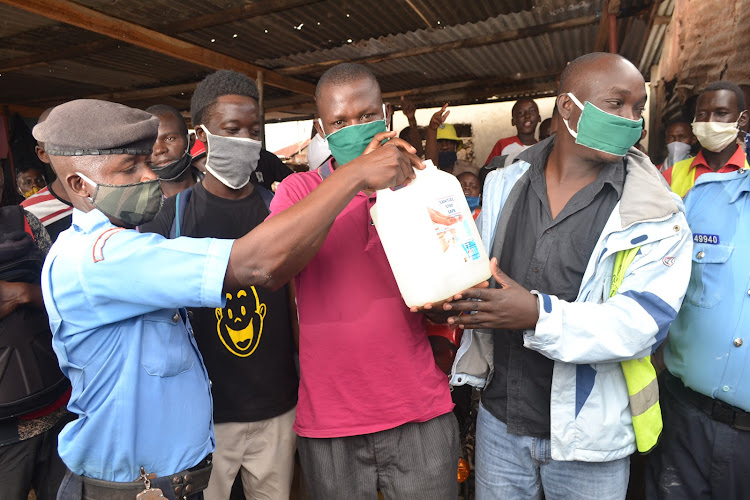 An average of 10 people contract Covid-19 daily in Mombasa.

As of Monday, the county had 315 cases. At least 25 people had already died of the contagion. The county’s infection rate was 3.9 per cent.

County Red Cross chairperson Mahmoud Noor said Mombasa has a long history with Middle East countries and that can explain the problem.

"The first cases of Mombasa were imported. There are people who had arrived from Dubai and other Middle East countries before they started spreading the disease within their communities,” he said.

As of Monday, Old Town had the highest number of infected people at 179, Kisauni had 38, Likoni followed closely with 36, while Nyali came fourth with 34.

At the same time, Old Town leads with nine deaths. Movement into and out of the area was banned following a spike in cases.

Ganjoni area has four deaths, Kisauni and Majengo have two each, Bondeni has three and Jomvu, Nyali and Bamburi have one death each.

On May 2 when Governor Hassan Joho scolded Old Town residents for not following government directives on combating the virus, the county had 129 positive cases and 11 deaths.

About three weeks later, the cases and deaths have increased by 186 and 14 respectively.

During a visit to Old Town on May 2, Joho and county commissioner Gilbert Kitiyo warned that the area was posing a greater hurdle in the fight against the coronavirus.

“You (Old Town residents) are dancing with death,” Kitiyo warned.

A frustrated Joho said residents would be forced to undergo mass testing if they do not come out voluntarily.

“You must be tested, if you do not come out voluntarily, we will come to your houses. If you refuse, we will not allow you to come out of the Old Town,” he warned.

The rising cases could soon overwhelm the county. It has 409 beds for Covid-19 patients in public health facilities.

On April 23, he launched another 300-bed capacity treatment and isolation centre at the Technical University of Mombasa (TUM).

Joho said another 90 isolation beds had been set aside in different health facilities.

Out of the 7,938 people who have been tested in Mombasa as of Monday, 315 returned positive results. However, the county commissioner says at least half of the cases have been discharged after recovering.

“A total of 115 people, who are now negative, have been discharged from facilities within the county,” reads part of a daily report on Covid-19 sent by Kitiyo.

As of Monday, Coast General Hospital had 77 recoveries, Mombasa Hospital had nine, Aga Khan had 16, Jocham had five and TUM had eight.

The county also tested 801 health workers and 22 of them tested positive.

The county government launched mass testing at the Kenya Ports Authority and 969 staffers were tested. At Aga Khan Hospital, 240 were tested, in Old Town, 255 have so far been tested and in Likoni 416 have tested.

In the Tudor area, 139 were tested and 1,884 truck drivers have also been tested.

There were 534 pending results as of Monday. Out of that, 16 tested positive based on the figures announced on Tuesday.