Once opulent, now destitute, sleeping in a toilet

In his heyday, he would empty beer bottles into his vehicles when they ran out of fuel 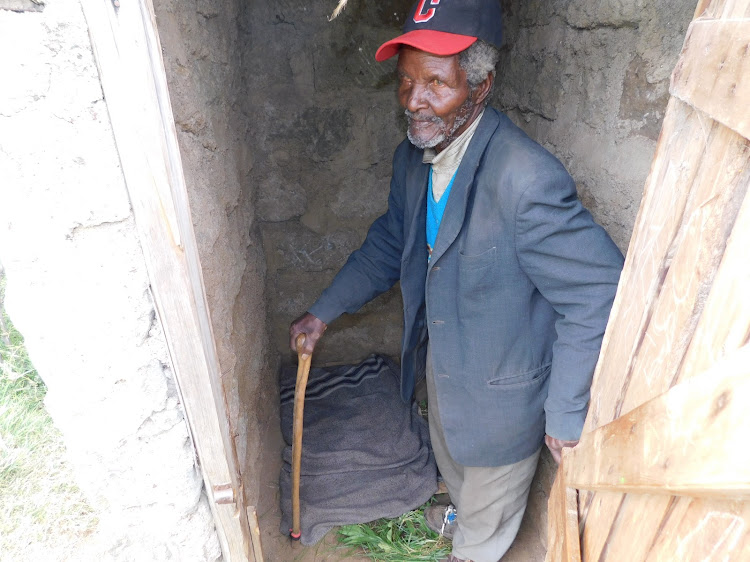 Mzee John Muiruri, alias John Big, was among the prominent businessmen in Kenya in the early 1960s to 70s. He wielded political influence and interacted with the who is who in the political and business worlds.

But now, in his twilight years in Nyandarua county, his life has been reduced to just memories that bring pain and sorrow. Even his once sharp memory is letting him down, just like his right eye, which no longer sees. He cannot remember when and how he parted ways with his wealth and influence abandoned him, or he is not willing to share this episode of a once-productive life.

Muiruri says the best he can remember is that he was born in Murang’a county in 1922. He does not remember where in Murang’a. Some family members later relocated to Njura farm in Kipipiri before he eventually settled at Bodeni in Gilgil, where he became a prominent businessman, earning the nickname John Big from Asians and Europeans.

He says in his heyday, he bought and drove nine cars, among them Ford Opel and Ford Austin.

Soon after Independence, he says, the founding President, Jomo Kenyatta, who he says was his friend, called him to Nairobi, where he managed former President Mwai Kibaki’s campaigns as he was first elected to Parliament in the then Donholm (now Makadara) constituency.

Now in his late 90s, Muiruri is destitute and relies on well-wishers at Roliondo village, Ol Kalou, for food. During the day, he sleeps at the roadside along Thome-Kagaa road, outside his younger brother’s Mungai Muiruri fence. At night, he sleeps inside the nearby Simba B ECD toilet.

“What else can I do? My brother, whom I raised, facilitated his circumcision and educated his children has no value for me,” he told the Star.

Mercy Mwangi, the Simba B ECD teacher, says Muiruri has slept in the toilet for four weeks now. She says he said he has nowhere else to go, especially to shield himself from the rain, which has persisted.

Mwangi said the old man only enters the toilet after her 35 pupils go home, and leaves very early in the morning before the report.

“I reported the matter to the chairman and he called a parents' meeting. It was agreed he be allowed to stay until the government finds a solution,” she said. 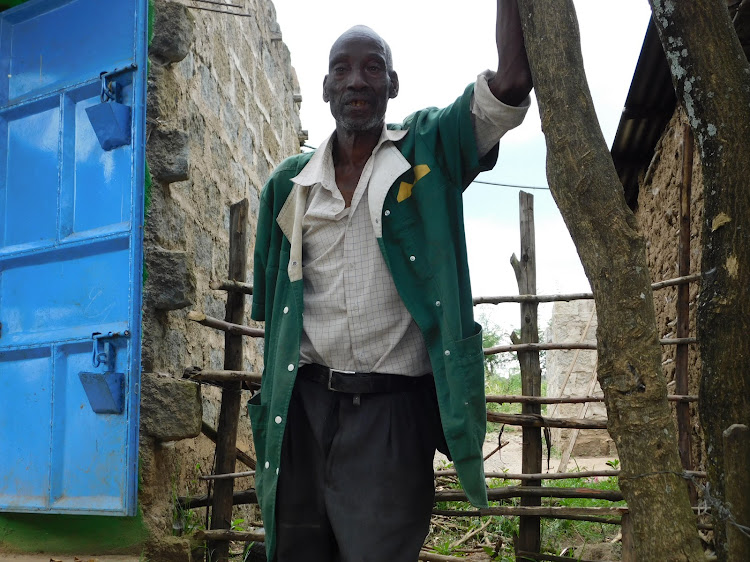 Muiruri accuses his brother of evicting him from the five acres they inherited from their late mother and demands that Mungai gives him at least half an acre, where the willing neighbours can build him a house.

Mungai, however, denies the land belonged to their mother. He says he acquired it in 1965, and by then, their mother had died. He says Muiruri acquired four and a half acres at Geta, Kipipiri, which he later sold for Sh4,000.

Mungai claims his brother was also given three acres at Rungai in Nakuru by the first President, Mzee Jomo Kenyatta, which he also sold. He says Muiruri and another Samburu man were well known to the founding President and even supervised and tasted his food before he was served.

Muiruri, however, contends that his younger brother connived with his father-in-law to grab his Geta land, and also a plot at Kariamu trading Centre in Ol Kalou. He denies he was given land at Rungai, saying it was a promise made by President Kenyatta after a trip he (Muiruri) and another man made to Israel, but Kenyatta died before the promise could materialise.

Ironically, Muiruri’s sister and another brother, who is now deceased, also acquired land next to Mungai. But none of their families shows any interest in their suffering relative.

Mungai confirms that his brother once lived in opulence. He would eat and drink in Gilgil, where he did business, and drove to answer to the call of nature in Nakuru town.

“If his vehicle ran out of fuel while drunk, he would empty bottles of beer into the fuel tank,” he says.

Mungai says for a long time, their elder brother keeps going and coming back, sometimes after many years, but no one knows to or from where. But sometimes, he has been renting land to grow tomatoes in Subukia, Nakuru county. He always welcomes him to his home and gives him a place to stay, but he becomes a nuisance to the family due to his abusive and drunken nature.

This habit has made the lastborn eject his brother three times, and he now vows he will never allow him back after he threatened to sodomise him and rape his wife.

He has told the neighbours who give him food to be ready to give him a burial place should he die in the neighbourhood as he cannot allow him to be buried in his land.

Muiruri claims his brother's hostility emanates from fear that his children, whom he abandoned in the late 60s, will come to claim their grandmother's land, and because he has refused to share the little he gets from the government in terms of money for the old.

He claims he educated Mungai, 79, and his children, too, but now his kid brother, whom he scornfully refers to as a product of infidelity from their late mother, has ejected him from their late ‘mother’s land.’

Mungai, however, says his brother is claiming a share of his land following incitement from neighbours, who want him to get a share of his brother’s land and sell to them. He denies that Muiruri educated him or his children. On the contrary, he says, he educated Muiruri’s three children when they were abandoned at his home after Muiruri sent away his wife in the 60s.

The Star managed to reach one of Muiruri’s children, Wanjiku Njoroge, who lives in Kikuyu, Kiambu. The 58-years-old mother of five says she knows very little of her father’s history since he abandoned her and two siblings at their maternal grandmother’s home in Njaai village, Kandara, Murang’a county, when they were very young.

She says her father sent away their mother when they were infants. He defied his siblings' wish to let them take care of their children if he was tired of them.

“He kept telling us he will take us to Murang’a, where our mother went to practise prostitution," she said on the phone.

Wanjiku says she was eight when their father decided to sell his Gita land in 1970. He took them to their grandmother and said he was tired of them.

“Unfortunately, our mother had remarried at Murang’a town. She got eight children with her new husband,” she says.

She says their grandmother could not take them to school, so she was employed as a house girl at a tender age, while her siblings were employed as shepherd boys. Her brothers later moved to Narok. One died at Kenyatta National Hospital, and it is not known where he was buried by the government since their father disowned him. She says she learnt of his demise four years later.

She denies they would be interested in their father’s brother land in Ol Kalou, a place she has never stepped in, since they were abandoned in Murang’a as children. He elder brother Muiruri Njoroge, 60, has, however, visited a few times. Wanjiku says her brother cannot help their father since he has followed in his footsteps.

“As for me, I can only sympathise. There is nothing more I can do, I am just hustling," she says.

The neighbours who are assisting Muiruri contend that his youngest brother should carry the burden given that he invested in him when he was a man of means.

Samuel Ndung’u, 71, says he knows Muiruri as a neighbour since he was a child, while Muiruri was a prominent businessman during pre-Independence and post-Independence years. The retired teacher says the old man used to drive his many cars filled with goods to his younger brother’s home and gave his all to support his siblings.

He says Muiruri was nicknamed Big John by Asians and Europeans since he had more money than them. He says the business empire collapsed following the family disintegration in the 1960s. Muiruri started a posts business at Geta before relocating to Nairobi after he sold his farm.

“Now that he is old and weak, he has come back to his family, but they are persecuting him. We only need them to give him a piece of land neighbouring the road where we, the community, can build a house for him. As we know he has only two children who are desperate hence cannot help,” he says.

Stephen Mathu says the community feels ashamed to see Muiruri suffering in front of the eyes of family members. He says though the community gives him food, they are afraid to accommodate him since his brother says whoever accommodates him should be ready to bury him should he die in their care.

The neighbours accuse the area assistant chief, who is the son of Muiruri’s younger brother, of aiding his father in persecuting the old man. The administrator, however, denies the accusation but says he cannot talk much.

Nyandarua Central deputy county commissioner Gideon Oyagi said Muiruri was given accommodation by his kid brother after he sold his land at Geta, but he is a habitual drunkard who has become a nuisance to the family.

Oyagi said the administration has taken over the matter and the area chief would be meeting his brothers and sisters to seek the way forward. He said Muiruri’s children don’t want anything to do with him.

“The sons and daughters do not want to hear anything about him. That is the most unfortunate thing,” he says. 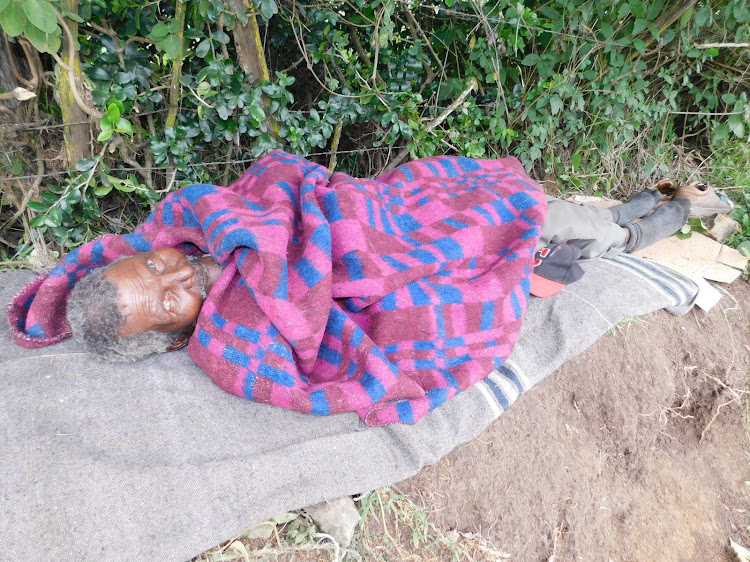 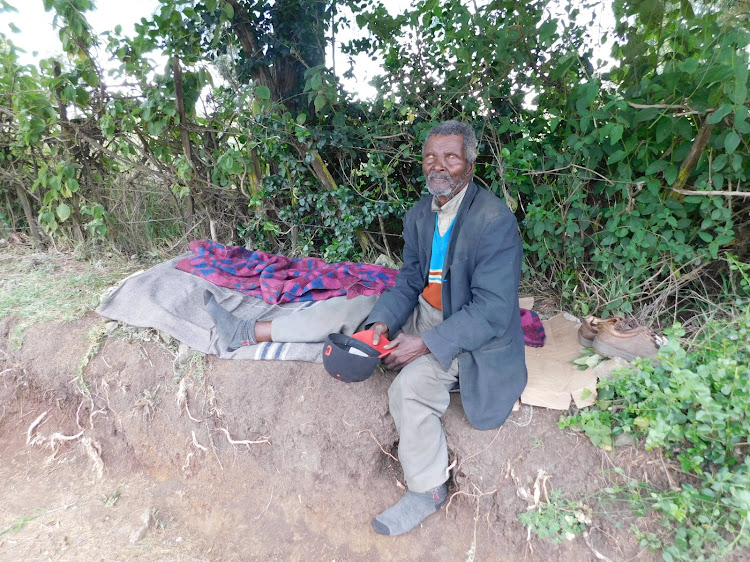 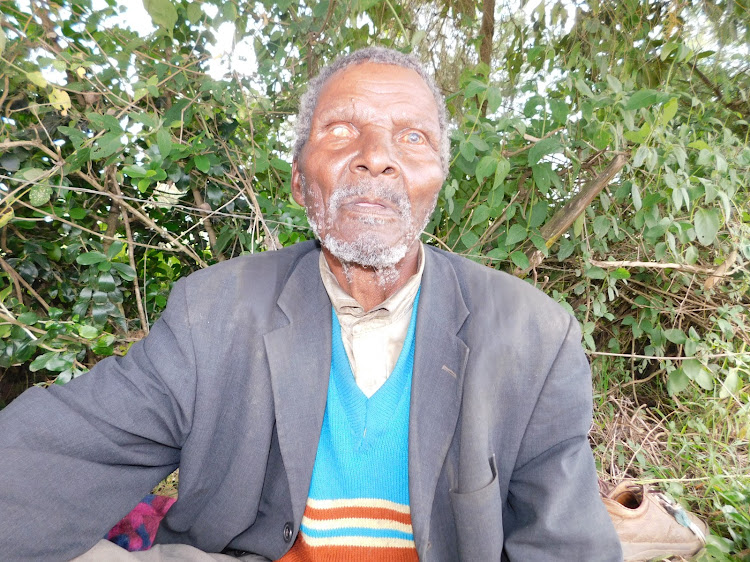