• 'Nowadays I don't even remember I have one kidney,' she excitedly told the Star, two months after the successful operation.

• Levis Kariuki, a 23-year-old actor from Thika, says he is always grateful he saved somebody's life in 2018. 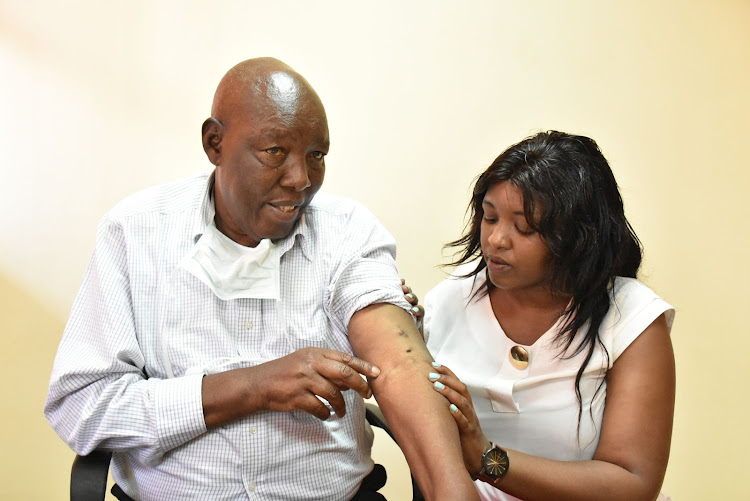 Alex Muthee, 71, shows the fistula scar for dialysis tubes. He is no longer of dialysis after his daughter Agnes (left) donated a kidney to him at MP Shah Hospital in Nairobi.
Image: Mercy Mumo

The change is instant for patients who benefit from a kidney transplant. Dialysis is just a stop-gap measure at best because it does only 15 per cent of the job of a normal kidney. Patients always notice their health deteriorate when they begin dialysis.

Isaac Muthee, 71, was on dialysis since 2010. Last year, his health had so deteriorated that he was constantly dizzy and vomited uncontrollably after every dialysis session.

He needed a kidney transplant, an option he rejected for 10 years, fearing an adverse outcome because of his advanced age.

"When our dad finally asked who can give me a kidney, I was ready. I love him so much I could not want to lose him," says Muthee's daughter Agnes, a heavy machines operator employed by Laikipia county.

On Tuesday, December 3, 2019, Agnes and her father were wheeled into the theatre of MP Shah Hospital for one of her kidneys to be extracted and transplanted to her father.

"Nowadays I don't even remember I have one kidney," she excitedly told the Star, two months after the successful operation.

Agnes has two daughters, a 16-year-old and a three-year-old. She will resume work this month, operating excavators and rollers for road construction.

"My elder daughter even wanted to donate her kidney if that would save the grandfather's life," Agnes says.

Isaac thinks his 'beer and nyama choma' lifestyle predisposed him to renal failure.

"In 2010, I had kidney stones then a tumour on my left kidney, but it was taken out alongside the kidney. The second failed after a few months," he says.

Agnes encourages family members of renal patients to consider getting tested to see if they’re a match.

"You cannot die!" she exclaims.

In 2017, University of Nairobi researcher Dr Alex Muturi published findings of a study that evaluated the health of 84 men and women who donated kidneys to their relatives at Kenyatta National Hospital between 2010 and 2014.

"The main findings of the study are similar to kidney donor studies done elsewhere," the researchers concluded. "Our study reports no fatality but significant early and late postoperative morbidity."

The study was published in the BMC Nephrology journal and continues to give assurance to potential donors.

Levis Kariuki, a 23-year-old actor from Thika, says he is always grateful he saved somebody's life in 2018.

Alex suspended his studies at the University of Nairobi Law School in 2018 as dialysis took a toll on his health.

"When I heard Alex needed a kidney donor, I immediately went for a blood group test," Kariuki says.

"Some people asked me, is he your mother? Your life will never be the same again, you will be a cabbage." 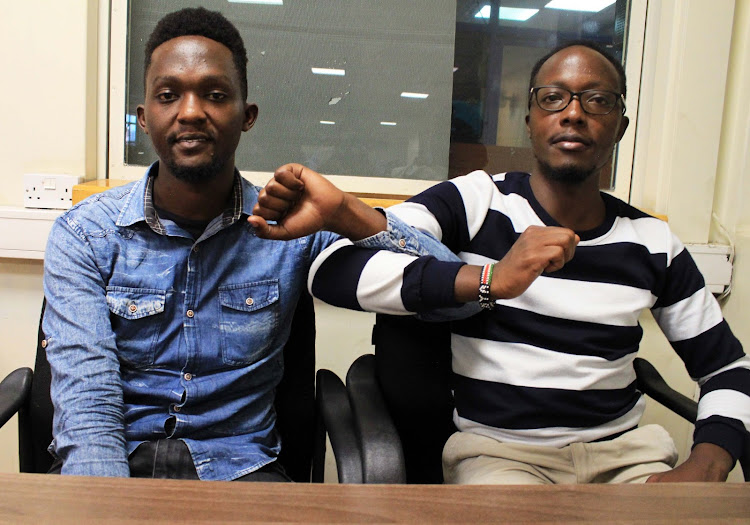 Levis Kariuki and his cousin Alex Mwaura during the interview.
Image: Andrew Kasuku

Kariuki is his mother's only child and reasonably expected she would discourage him.

"She asked me, has anyone forced you? I said no," he says. "She loves my cousin so much and said she supported my decision. She even accompanied me for tests and counselling at KNH."

Doctors advised that if tests cleared him for donation, he could expect to lead a normal life after the surgery and have a normal life expectancy.

They also mentioned studies that show when one kidney is removed, the remaining one increases in size to compensate for the loss of the donated kidney.

The two cousins travelled to New Delhi, India, for the surgery in April 2018, where all the tests were repeated.

"This was my first surgery. I feared. We sang gospel songs the whole night before the operation," says Kariuki, who is slim, tall and currently weighs 78kg.

The transplant was a success. "The change was immediate," adds Alex. "I could pass urine immediately, although it was very dark."

Alex returned to university after one year and completed studies December last year. He is now waiting to join law school.

He is on life-time immunosuppressants —  drugs that lower the body's ability to reject a transplanted organ — but Kariuki is not on any medication.

Kariuki continues to work on his acting career. He has resumed weight lifting and also joined Shangtao College in Nairobi to study animation.

"Whenever I see him I am very happy," Kariuki says of his cousin. "It was the right thing to do."