A student's three-year search for a kidney

For every one kidney available in Kenya, there are about 300 sick people who need it

• 4,300 Kenyans are undergoing dialysis in various hospitals as they look for kidneys

• Outside of Africa, most kidney donations come from brain-dead donors, and in 2017, only 36 per cent came from living donors globally

One poster featured Norman in high spirits, spotting large sunglasses before sickness took a toll on his health.

"I fight for my health every day in a way most people might not understand," the poster read.

At the bottom, on the right-hand corner, was the second image of Norman on a hospital bed, frail, tubes full of crimson blood streaming from his body.

Although Norman had grown comfortable sharing his personal story with strangers, the idea of asking anyone for an organ from their body was challenging, and still is.

A formerly budding basketballer, Norman is nowadays confined to his mother's house on Thika Road after his kidneys failed completely in December 2017. He survives by two dialysis sessions every week.

Norman's face has darkened with time, as a result of a build-up of toxins in his body.

Responses to the posters did not take long to come through. The first was a 24-year-old man from Kisumu.

"I want to help," the well-wisher wrote him in August. After days of conversations to ascertain his seriousness, viability and rule out other motives, the prospective donor travelled to Nairobi for medical tests.

"I was genuinely happy. He stayed with us for two days and we went for three-quarters of all tests. Then he vanished," Norman says.

"We were only remaining with three more tests. He blocked us all on phone and on Facebook."

Norman reached out to him on Facebook again from a different account, but there was no response.

The second well-wisher only needed some help with transport costs for himself and his mother, who had gladly allowed her son to donate his kidney and would accompany him to Nairobi for the tests.

"We were very glad and sent him transport to take a bus. He even called me to confirm they were now boarding the bus in Kisumu," Norman says. "But in the morning he was to arrive, he blocked me."

Norman, who is 20-years-old, is learning the hard way that finding a kidney donor in Kenya is not easy.

The Ministry of Health says 4,300 Kenyans are undergoing dialysis in various hospitals as they look for kidneys.

But willing donors are extremely difficult to come by and the waitlist is lengthening by the day. For every one kidney available, there are about 300 sick people who need it.

The Kenyatta National Hospital carries out the highest number of transplants in Kenya — approximately 15 a year, but most recipients have waited five to 10 years.

Around 2,000 patients are on the hospital's waiting list, according to the head of renal unit Dr John Ngigi.

Norman was diagnosed with high blood pressure by chance in 2016 when he accompanied his mother for a routine check-up and the nurses joked he should also get tested.

"I was admitted for three days. They did tests and found no other problem. So they prescribed two types of drugs but the pressure didn't stabilise. They then added two more drugs, which I continued taking," he says.

One morning in June 2017, he was rushed to Guru Nanak Hospital in Nairobi after he woke up vomiting.

He was initially diagnosed with the bacteria H pylori and discharged.

When the problem recurred in December, a month after he sat his KCSE at Kirwara Boys School in Gatanga, Norman was diagnosed with complete kidney failure.

Some causes of kidney failure are treatable and the kidney function may return to normal.

Unfortunately, Norman's kidneys were completely damaged and he was put on dialysis two times a week, Monday and Thursday.

He deteriorated from a bubbly basketballer and lost promptitude. He also dropped from college after six months last year because is always weak, especially the day before and after dialysis.

Norman can no longer exercise or eat at friends' homes because of dietary restrictions.

His daily allowance for liquids is one cup, and he cannot eat certain meats, bananas, mangoes — basically anything that contains phosphorous.

A taxi takes him to Nairobi West Hospital every Monday at 1am to book a dialysis bed.

"I get on the (hospital) bed early and lie there until 4am, when the sessions begin. There are only 25 beds and people are many," he says.

Only about 500 patients have undergone kidney transplants at KNH, Moi Teaching and Referral Hospital (MTRH) and private hospitals in Nairobi since 2006.

THE PROBLEM IS GLOBAL

The shortage of kidneys is partly being addressed through the proposed Kenya National Blood Transfusion and Organ Transplantation Bill, which is receiving expert input before being forwarded to Parliament.

The Bill will operationalise the Health Act, which allows Kenyans, either in a written will or oral statement, to donate their organs or body parts upon death.

According to the Global  Observatory on Donation and Transplantation, affiliated to the World Health Organisation, kidneys are the most transplanted organs globally.

In 2017, at least 90,306 kidney transplants were carried out, representing 63 per cent of all organ transplants globally, followed by liver at 23 per cent.

GODT is the most comprehensive source of global data on organ donation and transplantation. It says countries are facing an acute shortage of all organs.

Outside of Africa, most kidney donations come from brain-dead donors and in 2017, only 36 per cent came from living donors globally.

WHO says the surest way to end kidney shortage is to reduce the need for transplants by encouraging healthy living and treating those sick to stop complete failure.

At the same time, governments can encourage donations by reimbursing donors of all expenses and giving incentives like life insurance coverage.

Dr Hussein Bagha, the head of renal transplants at MP Shah Hospital in Nairobi,  says the risks to a donor are minimal because anyone with a less-than-excellent prognosis cannot be cleared for the procedure.

"You can expect to live a full life with one kidney and no related complications. Kidney donation is very safe," he says.

He says kidney transplant is a simple procedure and Kenyans have been doing it since 1978.

"Dialysis is a temporary measure. The best therapy is a renal transplant," he says.

The hospital only allows transplants from a related donor, who must share the blood group with the patient.

"The donor is admitted one day before the transplant and is discharged three days after the operation," Dr Bagha says.

Donors do not take any drugs after transplant.

"The patient is admitted two days before the operation and is discharged one week after they receive a new kidney," Bagha adds. 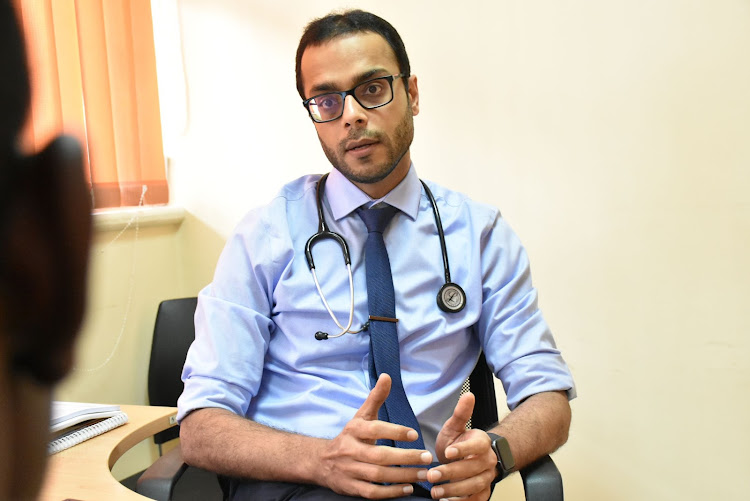 Transplants in Kenya range from Sh700,000 in public hospitals to about Sh2 million in private hospitals.

NHIF defrays up to Sh500,000 of the costs but does not pay for the immunosuppressant drugs that recipients need for life, which cost at least Sh15,000 every month.

The Kenya Renal Association has been campaigning for NHIF to pay for these drugs.

Dr Bagha says although the operations are cheaper in India, attendant costs like travel and accommodation make them more expensive.

"In India, the patient has to stay there for three months. But in your country, even your relatives can visit," he says.

He strongly advises the prevention of renal failure, especially among people with diabetes and high blood pressure, the two leading causes.

"Even young people with type 1 diabetes can get kidney failure at age 20," he says.

Last year, tests showed Norman's mother and sister are not a match and could, therefore, not donate to him. He remains physically depleted but has a strong will to live.

"I fight for my health every day in a way most people might not understand," he wrote in his poster. "I am a fighter and a warrior."