The boda boda takeover in Nairobi

Motorcyclists compete with pedestrians for space on city sidewalks as traffic snarl-ups mount, and the county government has struggled to rein them in 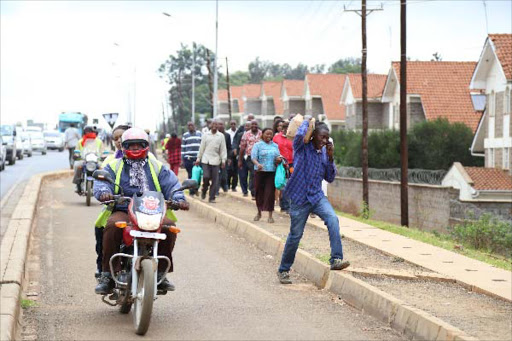 Mercy, an accountant at a city firm in Upper Hill, Nairobi, was one day walking to the city centre on a sidewalk on Uhuru Park when a motorcycle breezed past her, inches away from knocking her down.

She had been lost in her thoughts, listening to music on her earphones and oblivious of the danger that was fast approaching her.

“It was the least I had expected because I had assumed that the sidewalk was the safest place away from the mad rush of motorists in the evening traffic jam,” Mercy says.

Her experience is, unfortunately, becoming common for many pedestrians in Nairobi, especially during peak hours, when traffic is bumper-to-bumper.

To beat traffic, many motorcyclists use sidewalks to weave through congested roads that often resemble packed parking lots.

The ability to manoeuvre through traffic is the unique selling point for boda bodas, which have grown in popularity among many residents for their promptness.

In September 2016, the government scrapped the Sh10,000 excise duty previously levied on motorcycles.

This opened the floodgates for the purchase of motorcycles, whose number had peaked at 159,260 units between January and October 2018, according to statistics from the Kenya National Bureau of Statistics.

However, for many pedestrians, they have become a nightmare as they are compelled to give way. Most times, this comes as a rude shock.

Elias, who prefers walking in the evenings to save on transport costs, notes that the situation is often worse during rainy seasons.

“Sometimes, you are walking and without warning, one of them splashes water on you. Sometimes it is muddy and the sidewalk is the only place you can walk safely,” Elias says.

Before the boda boda bug bit Nairobi a few years ago, passenger service vehicles were the most notorious for using sidewalks to overlap during traffic jams.

Elkanah Jacob, the director of communications at the county government, however, notes that the county has tried its best to ensure all road users adhere to the law.

“Whoever is found flouting the regulations will face the full force of the law. In fact, last week, around 20 boda bodas were arrested for infringing on sidewalks,” Jacob said.

Between January 2018 and March 4, 2019, approximately 4,190 motorcycles had been impounded for flouting traffic regulations in the city.

Cumulatively, the riders arrested had to part with Sh12.7 million in storage fees and court fines.

Despite the crackdown on errant boda boda motorcyclists, the county government seems overwhelmed.

“The major challenge is that the boda bodas want to come to the city centre and operate how they want, forgetting we have bylaws and regulations,” Karanja said.

On his part, county director of parking Tom Tinega described boda bodas as a persistent headache, despite efforts by the county government to cure it.

Subsequently, City Hall has roped in the National Police Service to rein in rogue riders.

“If you look at our roads, most of them are not designed for use by boda bodas. How do you place a lorry with 10,000cc on the same road as a motorcycle with a much lower cc?” Onyango says.

Joseph, a boda boda rider stationed at Uhuru Park, said most cyclists are compelled to use sidewalks because of the congested roads.

“No sane rider would choose not to use the roads when traffic is flowing and choose to pass through the sidewalks. And in most cases, a rider must courteously ask the pedestrian for right of way,” Joseph says.

Fellow rider Andrew, who uses the Safe Boda mobile app for his business, believes boda boda cyclists are unfairly perceived as troublemakers by the county government and the public alike.

“When somebody hoots at you to allow him passage, it is not because he despises you. Giving way is something that takes seconds. Whoever is saying we are a nuisance is simply biased in criticising us because even vehicles overlap on sidewalks,” Andrew says.

Gabriel, another Uhuru Park-based rider, argues that the cyclists have learned from the best insofar as overlapping on sidewalks is concerned.

“Even police officers on motorcyclists overlap onto the sidewalks when traffic is congested. In fact, they are usually the first to do so before we see that and follow suit. That's why it is called a motorcycle; it is meant to manoeuvre through places that a vehicle cannot access,” Gabriel says.

Their protests notwithstanding, the cyclists admit there are a few bad apples among them.

“As you know, in every market, there are those mad people who do not follow rules. Indeed, we have a private watchdog who monitor those who flout the rules or mistreat other road users and take action against them,” Onyango says.

Even without this in-house watchdog to curtail rogue cyclists, the boda boda cyclists say any cyclist out to malign the name of the profession is dealt with instantly.

“Even right now as we stand here, if one of us does anything wrong, like steal or mistreat passengers, we will deal with him immediately. We might even chase them from here because that would spoil our good name,” Andrew says.

Despite disagreeing on whether boda bodas are a menace to pedestrians, both cyclists and pedestrians interviewed for this story agree on the need for better road infrastructure to remedy the problem.

“If that is the case, then the government should set aside a special lane for us like they have done on Ngong Road. When you go to developed countries, they have special lanes for motorcycles, pedestrians and vehicles,” secretary general Onyango suggests.

Charity, who loves to walk in the evenings as part of physical exercise, advocates the expansion of the road network to accommodate the motorcyclists.

“The boda bodas have increased yet the roads remain the same. Building new ones will reduce congestion and allow us to walk on sidewalks uninterrupted by motorcycles using the same route,” Charity says.

The non-motorised transport policy, developed in 2015, is the answer to the woes facing the transport sector.

It seeks to midwife an inclusive transport sector in which all modes of transport, including walking and cycling, are catered for in Nairobi's transport network.

At the launch of the policy document, then Governor Evans Kidero said, “I realise that NMT is of significant importance to Nairobi, more particularly as they can be used as an effective form of mobility for short trips and for last-mile connectivity to the proposed mass transportation systems, such as the bus rapid transit systems.”

Considering the county's – and the entire country's – awful policy implementation record, many residents would be forgiven for taking such sentiments with a pinch of salt.