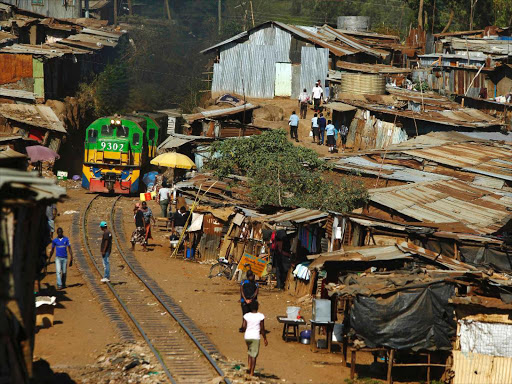 A train passes through the Kibera slum of Kenya's capital Nairobi February 26, 2015. REUTERS/

In the dark underbelly of Nairobi’s slums, the rule of law is often enforced with ruthless abandon.

From Benteke in Makadara, to Blackie in Kibera to Rashid in Mathare, certain cops are a law unto themselves.

While the general public refers to them as ‘Hessy’, slum dwellers know them as either super or killer cops. Here, they are dreaded and revered in equal measure.

These police officers have a near-mythical status. Almost everyone has heard stories about their existence but never seen them. Some know them very well and a few have miraculously survived their hands. Those whose real names are not known are given nicknames based on their appearance or modus operandi.

In Mathare slums, suspected criminals’ worst nightmare is Corporal Ahmed Rashid. A social justice centre operating there records more than 800 deaths caused by police in a year. Rashid runs his team with five other officers. Collectively they are called the Pangani Six.

Rashid has been implicated in multiple cases of extrajudicial killings, most prominently in an incident where he pumped 10 bullets into a boy’s body in full glare of members of the public in Eastleigh.

In his defence, Rashid claims he was provoked by the young boy wearing a police jacket he suspected to have been taken from his colleague, who was killed by thugs.

“For those whom we have profiled, we have to get them. Dead or alive. There is no compromise in that,” Rashid said in an interview with BBC.

Death is the only fate Mathare residents have come to expect when someone is in Rashid’s crosshairs. “If you get in and out of Rashid's car alive, count it a miracle,” said Sarah Mwangi, whose son was shot dead by police in 2017.

Youthful criminal Brayoh who is linked to a string of robberies and the murder of police officer Korir in a bus on Thika road. /COURTESY

When a crime is reported, Rashid claims he can recognise the gang involved in the attack from a physical description and the type of arms they carry. The six then profile you and hunt you down, dead or alive.

“Two wrongs do not make a right. As law enforcers, they should be more driven to adherence to the rule of law.”

While these officers make some people shake in fear, others pay reverence to them. Some of the locals who spoke to the Star strongly admonished taking power into one’s hands. Another group believes that taking action into their hands is the solution to fighting crime in slums.

“If you have ever fallen victim to these merciless criminals, you wouldn’t wish anything but death upon them,” Mathare resident Sam Nzioka said.

In Kibera, Blackie reigns. Everyone who spoke to the Star tagged his name to the killing of Cisco and Danger, alleged leaders of a dangerous gang that terrorised residents.

Jared, a resident, said: “The members who survived have since reformed and resorted to collecting levies from construction sites and informing on thieves.”

Blackie is known to most but spoken about only in the shadows of dark houses, in whispers. No one who spoke to the Star knows his real name, but they had all heard the nickname.

He is said to be very dark in complexion and loves to put on black T-shirts. That’s where he gets the name ‘Blackie’ from.

As I start my search, I am warned that I’ll never find him, he will find me instead. Most residents, however, think he is based at DC, a former AP post.

Responding to a post I made online, Zena Ismail said: “If you want to find him go to DC post.”

Blackie operates with two other officers, one known as Hussein but labelled Bolt because he can run fast, and the other officer is known as Mcoasti since he comes from the Coast.

The three traverse any corner of the vast slum without fear, including Lindi, which residents claim is a den of criminals.

“Lindi is far deep near the river, and most criminals hide there. Of course they hide among innocent people, and when the police come, they kill indiscriminately,” a resident said.

Some claim Blackie has been moved but still returns often. Others hold he is still in Kibera, by and large. However, none of them is certain. Kariobangi residents claim there is a Blackie, but we couldn’t ascertain if he was the same person.

Benteke rules in Makadara area. He is known far and wide in the depths of Majengo, Ofafa Jericho and beyond, but prefers Shauri Moyo. He gets his name from a Belgian footballer famous for scoring head goals.

When I met him, he was seated at a pub in Shauri Moyo, with another man whom I was informed is his colleague. His back was facing the wall, blue cap pulled forward as he quietly scanned the room. I tried to engage him in a conversation in vain.

The residents who know him said Benteke operates by creating fear among the youth. He walks with two other police officers.

He marks his targets, interrogates them on the accusations and digs out information on other suspected criminals.

“Benteke is the kind of cop that pops up in your house one night, spends three hours interrogating you before he leaves,” resident Samuel Owino said.

“He warns you to leave town and could even give you fare to your village. The next time you meet, you don't need to have committed any crime for him to pump a bullet into your head.”

Stephen Kariuki, a boda boda rider from Majengo, has fallen victim of Benteke's modus operandi. He says the officer picks you up from the crowd, or from the house, and parades you across the estate.

Karanja said he was picked up from base where he was chatting with his friends before being paraded across the estate.

“At the end, he warned me to leave town. Having heard stories, I did not hesitate. However, my family went to plead my case and after some months, I returned to the city, with his permission,” he said.

Kamukunji human rights worker Julius Muhia said Benteke was previously attached to a station in the area before he was moved.

“We recorded many cases where victims are said to have been taken from their home by the cop, only for them to be found dead the following day,” he said.

In Kamukunji, Benteke has since been replaced by Mablings, whose name sends chills into some while making others feel secure.

Mablings gets his name from his dress code, which is usually accessorised with many silver rings around his fingers and chains on his neck.

“He dresses like a youth, always in civilian attire with the 'bling bling'. I have never seen him in uniform, but I know he is an administration police,” a resident said.

Eliud in Dandora, Galgalo in Kariobangi and Blacky in Kayole are said to employ the same modus operandi in their functions.

KNCHR’s George Morara calls it a complete breakdown of law and order. “We are a nation governed by the rule of law. We cannot just throw them away and take matters into our own hands,” he said.

Police spokesperson Charles Owino, however, defended the vigilante cops. “Let the officer do his work. If he has been accused, the media cannot be the place to defend himself. We have systems,” he said.

Nairobi police boss Philip Ndolo said his office is not aware of any trigger-happy squads in the city, but any transgressions would face the law.

“I am a strong believer and supporter of human rights, and if there exists any police officers who are trigger-happy, then I wouldn’t come to their defence,” he said.

“I personally haven’t heard about any killer squads in the county. The people who hold such claims should report the cases to IPOA, civil societies and other relevant authorities that deal with such cases for investigations.”

Ndolo urged residents to cooperate with the police to solve cases.

“The human mind is such that when it is your family, you will naturally come to the defence of the accused, but the community might tell a different story,” he said.

However, Interior CS Fred Matiang’i admitted to what he termed “mistakes” by the police. Two weeks ago, in a meeting with key players in the Governance, Justice, Law and Order Sector, Matiang’i said police have never executed anyone as a matter of policy.

“When there will be a mistake, we shall openly resolve it. We should also avoid blanket condemnation of the police service. The least we can do is support them,” he said.

Matiang’i took issue with some complaints made against the police, urging all civil society and human rights activists to be responsible and balanced in their review of police officers.

“The police do not execute anyone as a means of policing. Such false information often leads to unjustified castigation of police officers, in spite of the daily sacrifices they make to protect and serve Kenyans,” Matiang’i said.

He said government agencies are committed to concluding all cases lodged against rogue police officers and delivering justice to any civilian whose rights might have been abused.

Matiang’i also welcomed plans to have more constructive self- assessment of the police. He declared an annual Criminal Justice Reporting Day, where verifiable data will be presented as a tool for measuring the progress made in implementing police reforms.

“We shall have respect for the rule of law and lives of citizens of this country,” Matiang’i said.

It remains to be seen if the ambitious plans will rid slums of killer cops who play judge, jury and executioner on youth they say are gangsters terrorising residents.