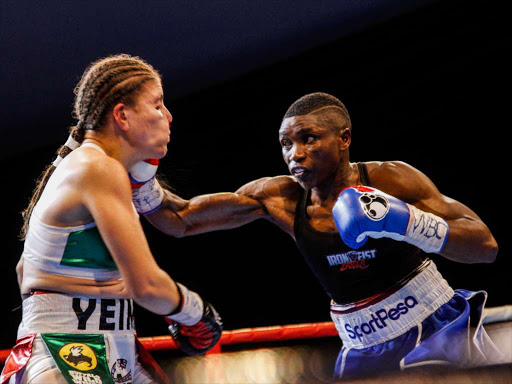 Dressed in a blue jeans trouser, black hoodie and white Nike sneakers, Fatuma ‘Iron Fist’ Zarika bounces to our meeting point, hands deep in the pocket. She is accompanied by her manager, former boxer Simon Kibe.

Like a wounded lion, the black scars she attained from the fight are still visible, most of them around her eyes. Despite this, Zarika says that was her best fight in her 44 professional bouts, including 30 wins, 12 losses and two draws.

“I looked at the crowd that had come to me cheer me and I could not believe it. Prominent people came to see me fight! I smiled. I knew boxing had gotten to another level,” Zarika says.

It has not been a smooth ride for the 36-year-old. Zarika has lost count of the number of times she has been duped by selfish promoters.

“I struggled for long. Promoters took advantage of me and they would refuse to pay me after a fight,” she says.

Boxing promoting in Kenya is said to be dominated by a cartel, which is hard to penetrate. Zarika says her situation was so difficult, she would even be given Sh200 after a fight, which was only enough for her bus fare back home.

Zarika remembers one time she was under contract with Osago Promotions together with the then bigwig, Conjestina Achieng, but ‘Conje’ would be favoured and was getting more recognition.

Conje, who was once the pride of Kenya in women’s boxing, introduced Zarika to the game. Now a shell of her former self, Conje was diagnosed in 2012 with schizoaffective disorder (paranoid schizophrenia), a mental disorder characterised by abnormal thought process, depression, hallucination, disorganised speech and thinking.

This might have come from taking too many head blows, combined with frustrations in the game. “She was a very good friend. She mentored me into boxing and I even fought her twice,” Zarika says.

Conje now lives in absolute poverty in her parent’s home in Siaya. On several occasions, well wishers have come to the rescue of the one-time household name who participated in 27 fights, winning 17, losing four and drawing six.

Zarika says it feels bad to know Conjestina’s state. “I haven’t seen or talked to her in a long time. It becomes hard since she doesn’t have a phone,” she says.

Like Conje, Zarika at one point had too many frustrations and considered quitting. “How would you feel if you woke up every morning to do what you love most but there was no money coming in?” she asks.

There’s a time she slipped into depression. It was during this time, with the help of a few friends, that she started training. “I was stressed out. Naingia kwa nyumba siwezi lala (I could not sleep),” she says.

Her friends brought together individuals she would train for Sh1,000 per session. This kept her and her two girls going. Though she agrees there is hope in boxing, she advises young and upcoming pugilists not to fully depend on the game for a living. “Get a side hustle, it’s very important. It comes in handy on a bad day,” she says.

Zarika’s turnaround came at the epitome of disappointments. She had just returned from Michigan after punching her way past Jamaica’s Alicia Ashley for the WBC World Super-bantamweight title in 2016.

Despite making history to become the second Kenyan female professional boxer to hold a world title after Conjestina Achieng, only her daughters were at the airport to receive her. To make matters worse, Zarika was not paid for her efforts.

It was then that SportPesa came on board, making Zarika their brand ambassador, a position she holds until now. “My fight with Yelmi was the first sponsored and promoted by SportPesa, and I tell you what, I am happy,” she said.

It has not been different for Charity Mukami, who found herself in boxing by default. We meet her at what she calls “my hustling joint”, where she cleans vehicle windscreens and headlights at a parking lot next to the Aga Khan Walk, Nairobi.

Mukami had been employed as a socks hawker in Eastleigh with other young women. As a way of “welcoming” her to the job, some of her colleagues who had been there long stole her merchandise. “They were two and bigger than me but I beat them up senselessly, when they refused to give me my socks,” she remembers.

As fate would have it, a man saw her fighting and he approached, held her by the waist and ordered her to stop. “I thought he was a police officer and I begged him not to arrest me,” she says. The man told her he thought she could be a boxer and gave her his phone number, asking her to call him the following morning.

When she called, he asked her to meet him at Eastleigh’s St Teresa’s. “He took me to a gym full of boxers, introduced me to a coach and left. I have never seen that man since then,” Mukami says. She hopes one day she will find him and thank him for noticing her talent.

After training for three months, Mukami got her first fight, which she won. “This lifted my morale,” she said. She met Conjestina Achieng on her third fight, and though she lost by one point, Mukami knew boxing was her thing. “Conje was a household name then and that she beat me by just a point was encouraging,” she says.

Her boxing hopes would slowly be thrown under the bus when she started getting frustrated by promoters. “There was this time I signed a deal of Sh80,000 but after the fight he only paid me Sh5,000,” remembers Mukami, although she is hesitant to name the promoter. Mukami said there is always an invisible person behind every promoting company.

Having two children to cater for by then, Mukami started hawking air fresheners to feed her family. “I would go to the gym in the morning and hawk during the day,” she says. She then dropped hawking and joined nightclub security, becoming a bouncer in different nightclubs in Nairobi, a job she did for three years before moving to the village, where she started farming.

It was at this time that Mukami, who is married, got her third baby. “In 2013, I felt the urge to come back to boxing but with a resolve not to take punches for free,” she said.

She had moved back to Nairobi but fights were proving difficult to come by, since she would refuse to be taken advantage of. She then became inactive but continued to go to the gym since her body was used to it.

It was at this time that she joined a group of people who clean vehicles next to Aga Khan Walk. “While I continued to farm in the village, I had to find something to do in Nairobi, since I was here most of the time,” she says. She charges a small amount and on a good day, she can take home Sh1,500.

Three months ago, Mukami received a call from SportPesa, inviting her to fight Florence Muthoni to curtain-raise for Zarika vs Yelmi at the KICC.

While they battled to a draw, Mukami was happy to see a huge turnout and is convinced boxing is finally picking up. She says she was shocked after she was paid soon after the game. “We are used to like beg for the pay, but with this one we were paid soon after,” she says.

The Kenya Professional Boxing Commission is trying to change the exploitation narrative. KPBC patron Anthony Kimani, who replaced Nairobi Senator Johnson Sakaja only a month ago, said disciplinary action should be taken against any promoter who refuses to pay boxers their hard-earned money.

“Kenya has very talented boxers, both male and female, and if properly managed, there is money,” he said during an interview.

The fear of promoters should be a small problem if the industry is streamlined, he said.

“I know and understand the nitty-gritty of boxing, and you cannot be a promoter if you are not registered by the professional boxing commission, KPBC. The commission should be able to crack the whip,” Kimani said, adding that promoters who go against the rules should be deregistered.

While faulting such promoters, Kimani said the buck, however, stops with the commission, adding that such a mistake should not be allowed to keep recurring. “I mean, how do you allow that to happen? Before the fights, the contract should be open to the commission. It doesn’t matter whether you win or lose; there should be an agreement before the fight. It should be that easy,” Kimani said.

KPBC outgoing chairman Hillary Alila has cited lack of support from the corporate world as one of the biggest problems facing the commission.

He said other companies should join SportPesa and commercialise the sport.

“Corporates should come and partner with us,” he said, adding that they have not been perfect but should be commended for the few achievements they have had. “Boxing is expensive and without sponsors, we would not make it,” he added.

KPBC is expected to hold their elections to replace the current leaders in three months, and Alila has urged the stakeholders to elect people who will take over from where they have left and push the boxers’ agenda forward.

“There is great potential but without proper management, we are doing nothing,” he said.

Kimani, who is a big-time boxing fan, said the secretariat should be held by knowledgeable people who understand the profession.

“Ideally, elective posts should be held by former boxers since they understand the game. To tell them, look, let’s do the right thing, would be much easier since they have been there,” he said.

While he has just taken over as the patron, Kimani said he will do whatever it takes to take boxing back to where it used to be.

“Remember the good old days when Robert Wangila won the maiden Olympic boxing gold for Kenya? I hope we will get back there,” he said.

He said if boxing is nurtured properly, it can go far. “This is where my job comes in. I want to talk to companies interested in sports to nurture the Zarikas and Okwiris of this country while they are still young,” he said.

By the conclusion of his two-year term, Kimani hopes to have an international boxing bout for both male and females at least once every month.

Sports PS Peter Kaberia said boxing, like any other sport in the country, is eligible for financial support from the government, on condition that their requests are structured.

“We don’t have any problems with supporting boxing. The bottom line is they must have their activities structured and make full requests from the government from where a discussion can go on,” Kaberia said.

“Once they ask for help, we can sit and see where we can help. Just like football and the rest of the sports, boxing is still within our mandate. We are bound to support them, only if the requests are made in good time and by following the laid-down procedures.”