Is killing a pregnant woman a case of double homicide? 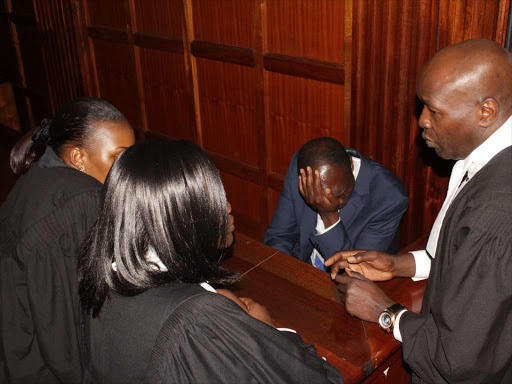 Migori Governor Okoth Obado with his lawyers at a Milimani court on Monday, September 24 where he was charged with the murder of Rongo University student Sharon Otieno, 26. /COLLINS KWEYU

As Migori Governor Okoth Obado and his alleged accomplices face charges in relation to the killing of Rongo University student Sharon Otieno, the fact that she was pregnant adds a layer of legal intrigue.

Can a murder suspect be charged with killing an unborn baby if he is accused of murdering an expectant woman?

The seven-month pregnant Sharon was raped and stabbed eight times and her unborn baby killed on September 3. Obado was charged on Monday with aiding and abetting her murder.

Lawyers have differed on whether DPP Noordin Haji can sustain charges against the suspects for murder of the foetus.

Lawyer Shadrack Wambui says he can. He says from a constitutional perspective, as is in Article 26 of the constitution, life begins at conception. So if a foetus is killed, someone can be held to be responsible for that murder.

However, Wambui says the question that will then avail itself in the circumstances Obado finds himself in is whether he can be charged with two capital offences.

Usually, the practice of criminal law is that when one has been charged with more than one count of capital offence, the court suspends the other charges for the simple reason that one cannot die twice.

Wambui says although courts have always held the view, the prosecution can withdraw that one charge [murder of foetus] under Section 87 A of the Criminal Procedure Code, so that if he [Obado] is acquitted of the charge of Sharon’s murder, the possible scenario, then the DPP can bring another charge and prosecute for the murder of the foetus.

The lawyer says it is a question of discretion that the court and DPP have. The DPP does not lose it by charging right now only the offence of murder of Sharon.

"This is a catch-22 situation. He [Haji] can choose to assume it [foetus’ murder] for now or wait for the proceedings to take off and the ruling of the court. If the court holds him culpable or guilty of that offence [Sharon’s murder], then it will mean that if he will be convicted and sentenced to death, then there will be no wisdom in charging him for the second charge of the murder of the foetus," he said.

"But if he is acquitted of this one, the DPP has all the legal rights to prefer another charge for the murder of that foetus. It arises from common sense. You see you cannot die twice but the Supreme Court has held that death sentence cannot be the only available sentence for the offence of murder. Therefore, one can be sentenced to life imprisonment or any other sentence the court will deem fit."

But lawyer Stanley Kang’ahi differed with Wambui. Kang’ahi argued that the death of a foetus in a woman’s womb can either be as an issue of abortion or state of miscarriage but can’t be murder.

"My understanding of death of foetus inside the womb is always a question of abortion and miscarriage or any other term, but definitely not murder. Murder in law has its precepts of malice aforethought and intention to kill. You must establish the intention that the person had against the unborn," he said.

Kang’ahi argued that there is no conscience for a person to hold a grudge against an unborn to be said to have wanted to kill the unborn child. Therefore, proving murder of a foetus would be difficult.

But Wambui said proving murder of foetus is quite simple. He says prosecution only needs to prove an act [that led to the death] and that that act is the stabbing of the mother.

"A pathologist has to prove that this foetus is dead. Once we have an act that led to the death of a foetus then the DPP can charge you, get a conviction and a sentence against you for the murder of that foetus. It flows from logic that once an act has been done, which act can be linked to the death of that foetus, then the prosecution can be sustained and a case can be made," he said.

"It flows from legal reasoning. When you do something, something else is likely to occur. By stabbing the mother and the child, death happens to be the result because you don’t expect to stab and kill the mother then sustain the child. An intention can be deduced from that act — by killing the mother, it is also logically reasonable to conclude that you also wanted to kill the child."

Kangahi says although community organisations perceive that life begins at conception, the key ingredients you must satisfy in the charge of murder place the prosecution at a hard place.

He says the whole thing is a question of academic discussion. In the matters of criminal procedure, there is nothing tying any suspect, governor notwithstanding, to the death of foetus.

Kang’ahi says until the birth of a child, the foetus is still part of the mother; it is entirely dependent wholly on the mother. Therefore, it is obvious that it can’t be dissociated from the mother. He says there can’t be a complaint at the behest of the foetus suggesting that it was murdered because the law might not be able to prove the same.

"If you have an argument with someone over some money and five minutes later they are found dead not very far, then it is easier to conclude that the argument escalated and ended up in death," he said.

"It was an inevitable medical condition that caused the death of the mother."

Dr Joshua Matu said one can only be charged with murder of a foetus if the death occurred at a time when the foetus can survive without dependency on the mother. Dr Matu said a child must have attained a weight of 350g to be able to survive outside the mother’s system.

"If the mother is killed once the child has reached the point they can survive outside the mother’s system, then the suspects can be charged with murder of both the mother and the child. But if the death of the mother occurs at a time the child’s status per development is not compatible with life [without the mother], then that case is different altogether," Dr Matu said.

"However, if the child has not developed to that particular stage — where they can survive even if the mother is killed, then you can be accused of killing both. The baby must be able to survive in an incubator or by their own if extracted from the mother."

Post a comment
WATCH: The latest videos from the Star
by By JOSEPH NDUNDA @Joseph_Ndunda
Big Read
26 September 2018 - 06:00
Read The E-Paper