Plight of girl, 12, subjected to FGM and thrice married off to old men 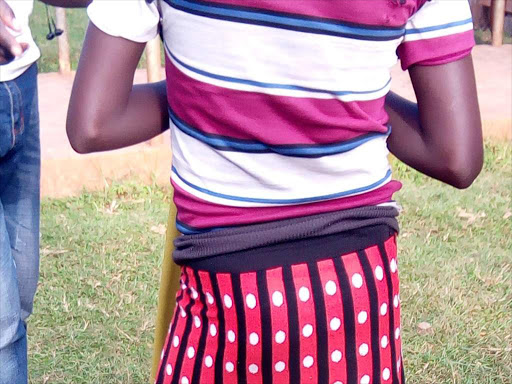 Hellen Longoria (not her real name), a 12-year-old girl from Baringo county, has been to hell and back.

The girl from Emobositit village, Tiaty subcounty, went through FGM and three early marriages before AIC Pastor David Kimeu and his wife Judy came to her rescue in September last year.

”I knew my life is back and I could soon go back to school to accomplish my dreams of becoming a teacher,” she said.

Pastor Kimeu said he took her to Chemoling’ot Primary School, 100km away, where she is currently doing her standard one.

Hellen could not control her tears as she collected the courage to explain how her ordeal began.

Her parents forced her to undergo female genital mutilation at the age of eight years in Tirioko ward, then married her off to a man over 60 years old.

“I was just a child and could not manage the role of being a wife, and so my first elderly husband assigned me to look after his cattle and goats,” she said.

She was subjected to dog-like beatings “whenever I lost one or two animals in the bush”, she recalls.

However, when she decided to run back home to her parents, she got a harsh reception.

“I was forced to marry a second elderly husband, who did similar atrocities to me. Worst of all is how I lost my virginity to a camel-size bodily object he penetrated through me,” Hellen said.

“I feared sharing this horrible experience with my hostile mother.”

Furthermore, the wound created after she was circumcised refused to heal.

“I had to ran away but my merciless parents got hold of me again and forced me to get married to a third husband of similar age,” Helen said.

Seeking to establish the reason for remarriages, the Star learned that according to Pokot traditional culture, dowry is paid once a newly married woman gives birth to her first child.

“She was still young but due to illiteracy, the parents could not understand that she was yet to even start her monthly periods,” Pastor Kimeu’s wife Judy said.

Apart from contending with early marriages, Hellen grappled with bad health. She has the deadly kala-azar disease, which causes the stomach to swell, frequent waist and chest pains and headaches.

“I don’t even know where each of their homes is located. They just ran to our church at Embositit and I got touched by their inhuman experiences before offering to accommodate them,” he said.

Kimeu said he and his wife once escaped death narrowly as armed parents of the girls targeted them for withholding their daughters.

“We had to get out of the house and spend in the bushes as they looked around to shoot us with A-K47 guns,” he said.

The girls are aged between eight and 13 years and study in various rural schools between standard one and seven. When schools closed for August holidays, Kimeu had to transport the girls 200km away to the county headquarters in Kabarnet town for refuge.

Early marriage plagues local girls after they have been circumcised. She is regarded as mature and ready to become a wife.

Judy said: “Although the girls are in school, the problem is where to hide them during holidays from their harsh parents and brothers, who want them cut and married off to get wealth in the form of dowry,” she said.

The media found the girls camped at Kabarnet Deaf and Blind Rehabilitation Centre, awaiting the next move.

Centre principal Salina Binot said: “After listening to their disheartening experiences, I decided to offer them a place here to put up temporarily. But they are really in desperate need of urgent humanitarian help.”

The girls could not communicate in either English or Kiswahili due to illiteracy. They could only speak in their mother tongue.

“It is circumcision season and thousands of girls are currently undergoing the cut then later being married off, so I decided to bring them here for refuge then they shall get back to school next term,” Binot said.

He called on friends and well-wishers to come and assist the girls get to better schools.

On August 9, the 16 girls and their rescuer, Pastor Kimeu, were arrested and arraigned before Kabarnet magistrate Viena Ambogo.

Ambogo ruled that the girls be returned to Tiaty Subcounty and accommodated in children’s homes for a year as their case is determined.

Going by the application made by the county children’s services coordinator Otsom Omuse, the magistrate also ordered immediate arrest of the parents and guardians of the girls to face child neglect charges.

Omuse said he had no clue when the children were rescued. “It only got to our attention that they were in the wrong hands and ought to be released to the relevant authorities,” he said, adding that he appreciates the good work done by Pastor Kimeu to rescue the girls.

The children could not contain their tears upon the court decision to separate them from the rescuer, Pastor Kimeu, and their ‘mother’ Judy, whom they had stayed with for four years.

Besides being committed to children’s homes, the girls were also ordered to return to their present rural public schools to continue their education.

“The locality is still risky. They will be got again by their parents and brothers and will be circumcised and married off,” Pastor Kimeu said.

Baringo commissioner Henry Wafula said following harvests, there is plenty of food, tempting many families to initiate their children this season.

“But we won’t allow the girl child circumcision. I direct my chiefs and security officers to be watchful to arrest the culprits,” he said.

Tirioko MCA Sam Lokales said he has less to offer to the rescued girls as of now.

“What do you expect me to do, yet there are so many such cases of FGM taking place and I am confused on whom to deal with?” he said.

He said it is up to the county security apparatus to pursue anyone practising the outlawed FGM.