Gains and fears from handshake year after hotly contested polls 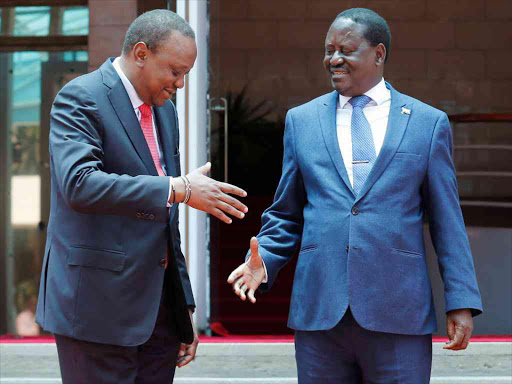 The March 9 handshake remains the foremost highlight of the postelection period as Kenya marks a year after the hotly contested elections.

The country teetered on the brink of collapse during the elections, but it is now witnessing significant political developments that could shape the next four years, with more underlying issues yet to be resolved.

President Uhuru Kenyatta and opposition leader Raila Odinga’s decision to bury the hatchet in the best interests of the country has been hailed globally as an act of statesmanship.

The decision by the two hitherto antagonists to establish a taskforce to design the country’s roadmap to addressing historical injustices and setting the nation on the path of prosperity, restored calmness and inspired hope among millions of their backers.

The duo identified nine issues of mutual concern they want to deal with as a matter of priority in the Building Bridges Initiative, as they attempt to unify a country largely divided along political and ethnic lines.

As the handshake brokered a ceasefire to the protracted political confrontations and ushered in a stable environment for Kenyans to go about their businesses, questions still abound as to the finer details of the Uhuru-Raila pact.

Both Uhuru and Raila are guarded about actual details of their agreement, often saying their 14-member taskforce team will unveil the contents at the most opportune time even, as their allies remain anxious over the deal.

However, Raila appears to have earned an elevated status in the country even without any official capacity, and has on some occasions represented the President abroad, signalling a new dawn in the country’s political dispensation.

Since Independence in 1963, Kikuyu and Kalenjin have dominated the government.

The two groups clashed after disputed elections in 2007, in violence involving many tribes that left 1,200 Kenyans dead. They were united ahead of the 2013 vote by Kenyatta in his Jubilee alliance.

The Luo and other groups have often felt excluded by the central government and made their own NASA alliance, led by Raila.

Tensions between the Kikuyu and Luo groups contributed to a dispute between Kenyatta’s father, the founding President, Jomo Kenyatta, and his vice president and Raila’s father, Oginga Odinga, in 1969. That set the stage for years of bitter rivalry between the two powerful families.

The last staged handshake between Kenyatta and Odinga was shortly after the 2013 election, when Raila accepted defeat.

For now, the rapprochement has calmed fractured politics that had also disrupted the economy and put off investors.

But few observers believe the truce will resolve the deep-seated ethnic tensions as Uhuru and Raila have promised.

Cases linked to the violence after the 2007 election against Uhuru and Ruto at the International Criminal Court in The Hague collapsed.

The police killings of opposition supporters that marred both the August election and the rerun in October that took place after the Supreme Court annulled the initial poll are also still fresh in Kenyan minds.

The Jubilee alliance was also forged on the premise that the populous Kikuyus and Kalenjins would stick together to lock out Raila or other opposition challengers.

The Kalenjins may be upset if Uhuru does not let Ruto take the helm of the alliance, with a view to the presidency in 2022.

Uhuru could also turn to Gideon Moi. The seasoned politician and senator from the sizeable Kalenjin community is the son of former President Daniel arap Moi, who made Uhuru his protégé.

A year after the last general election, tension is palpable in government, especially after the March 9 handshake.

While talk of his entry into government had been rife, Raila’s deal with Uhuru appeared to jolt lieutenants of Deputy President William Ruto, who have claimed the opposition leader is angling for the President’s support in the 2022 elections.

The mistrust and suspicions in government, compounded by claims of mischief, have ganged up to poison the tranquillity the country has been enjoying and instead set the nation on a 2022 campaign mode.

The DP has been criss-crossing the country ostensibly to inspect and launch development projects but along the way, he has as well embarked on his signature harambee meetings every weekend in a deliberate strategy to stay ahead of the pack.

While Ruto has defended his whirlwind tours across the country, a section of politicians have accused him of putting the country on a perpetual campaign mode four and a half years off the Election Day.

The renewed war on corruption is also a major highlight of the post-election period, with Uhuru’s ruthless ant-graft purge targeting officers in government who have pilfered public resources.

All heads of procurement and accounting units in government are undergoing fresh vetting in a bid to root out rogue ones who would have amassed wealth through corrupt means.

The calm political environment, coupled with the support of the handshake, has reinvigorated the anti-corruption war after Uhuru and Raila said none of the culprit elements should hide behind political parties or tribes for protection.

"Ethnic undertones have been subsided and at least for the first time, people now talk objectively, with the fight against corruption obviously not taking a tribal path," said National Assembly Minority Leader John Mbadi.

The ODM leader says under the previous political scenario, ODM could have stood up to defend its politicians targeted in the war against corruption.

"We have not come out to say one of our own is being targeted, even when Busia Governor Sospeter Ojaamong was charged, because now the political thinking has decreased," the ODM chairman said.

National Assembly Majority Leader Aden Duale told the Star the handshake has created a conducive environment for businesses to thrive and given the economy the much-needed impetus.

"Investors have the confidence to set up their business in the country without fear over an uncertain future. Political stability is very crucial to jump-start the economy," he said.

The Garissa Township MP said the handshake will now allow the Jubilee administration to focus on the President’s Big Four agenda without much distraction.

"The government now works in harmony with serious focus on implementing the President’s Big Four agenda. For the first time, Parliament is providing the necessary budgetary approval support without much drama," he said.

While most ordinary voters walked into polling booths last year and peacefully cast their ballots in an event that could have passed on like any other election year, the polls would later pose a major threat to the country’s stability.

Initially, the political environment had been poisoned by vicious attacks on the country’s Independent Electoral and Boundaries Commission by key opposition leaders, who accused the agency of lacking the capacity to conduct free, fair and credible polls.

As the country’s leading opposition luminaries constantly tore into IEBC, Jubilee, the ruling party, came to the defence of the commission, accusing the National Super Alliance of sensing defeat.

A plethora of proposed security legislations and far-reaching electoral laws amendments by Jubilee further worsened the situation as the Election Day drew near, with NASA cautioning that the incumbent was setting the stage for rigging the polls.

Claims of interference with the electoral infrastructure in rigging plot allegations claimed the life of IEBC’s head of ICT Chris Musando seven days to the elections, consequently lowering confidence levels on the independence of the electoral body.

With some 19.6 million voters having been declared by the IEBC as eligible to take part in the hotly contested polls, August 8, 2017 was the Election Day and Bomas of Kenya was the National Tallying Centre.

While the country’s security situation remained calm across the country as Kenyans stepped out to cast their votes, this would change drastically as results started trickling in at the National Tallying Centre, amid claims of hacking of the IEBC systems.

Raila, the NASA presidential candidate, then led his troops in denouncing IEBC results, warning that President Uhuru Kenyatta’s Jubilee party had plotted an intricate rigging scheme to deny him victory.

The country’s electioneering history was set for a major upset when the Supreme Court, led by Chief Justice David Maraga, annulled Uhuru’s victory and ordered the IEBC to conduct snap elections within 60 days.

It was a landmark yet precedent-setting ruling in the whole of the African continent, after the apex court found IEBC culpable of multiple electoral malpractices that impugned the commission credibility.

Despite NASA’s push for a transition government to allow for more time to reconstitute an independent electoral commission, the IEBC, chaired by Wafula Chebukati, insisted on a snap presidential election.

October 17 was the initial date for the run-off election between President Uhuru and his closest challenger Raila Odinga, before it was moved to October 26 upon advice by the High Court.

However, in what could definitely sink the country into political uncertainty, Raila pulled out of the rerun, consequently giving Uhuru a landslide victory in the repeat elections boycotted by the opposition leader’s Nyanza strongholds.

IEBC was barred from conducting elections in the regions controlled by the opposition after protesting NASA supporters barricaded roads, lit bonfires and blocked the commission staff from accessing polling stations or distributing election materials.

As IEBC declared Uhuru the winner of the repeat presidential elections, opposition leaders moved to the Supreme Court but lost a legal challenge that could have once more annulled presidential polls, resulting in a protracted outbreak of violence and civil disobedience that ended with the handshake.