• Dubai’s explosive growth in the space of a generation, from a humble fishing village to a global metropolis, has earned it the nickname “City of Gold”. 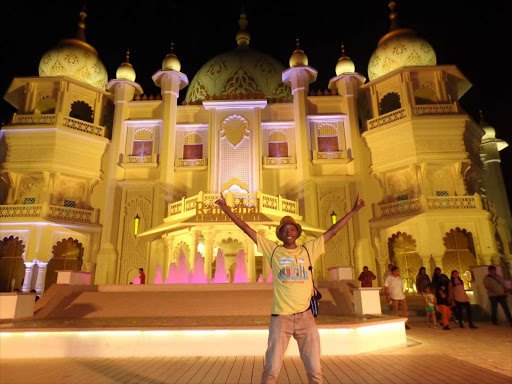 Dubai is one of those places you are likely to pass through while travelling, for it is strategically located between Africa, Asia and Europe. From the air, it’s a colourful collage of sand, sea and skyscrapers. Get up close and you see a much more intricate society, from old-world souks to palatial shopping malls, rolling sand dunes to indoor marvels, amusement parks to sound and light shows.

I explored its wonders at the end of April with three fellow journalists, courtesy of the Dubai Department of Tourism and Commerce Marketing. It was a five-hour direct flight from Nairobi, and a comfortable journey on Fly Emirates, the national airline of Dubai’s federal government, United Arab Emirates.

We arrived to temperatures of 33 degrees celsius, far from the summer time peak of nearly 50 degrees, plus all cars and buildings have air conditioning, so we barely felt the heat. Emiratis, elegant in their flowing robes and headgear, were far outnumbered by foreigners, 15-85 per cent. Nearly everyone speaks English, though, and nearly everything, from building names to receipts, has an English translation to the local Arabic lingo.

Dubai’s explosive growth in the space of a generation, from a humble fishing village to a global metropolis, has earned it the nickname “City of Gold”. We found it still growing. Cranes dotted either side of the city’s massive freeway spine, Sheikh Zayed Road.

Despite already harbouring the world’s tallest building — the 828m Burj Khalifa, which dwarfs our 140m Times Tower — Dubai is still building roads and infrustructure ahead of Expo 2020, which it will host. If you visit a second time, you will find new developments have cropped up, so you can never get tired of it.

“The word ‘impossible’ does not exist in the UAE vocabulary,” Dubai ruler Sheikh Mohammed Bin Rashid Al Maktoum was quoted as saying in a historical clip we watched.

While Kenya doesn’t have oil riches, I came back feeling we can also dare to dream. There was plenty in Dubai’s progress that is well within our reach with proper planning. I listed 10 areas we could emulate.

1. Clean up the environment

While we were away, the headline in The Daily Nation read: Rot in the city, accompanied by an image of a path choking in garbage. Clearly, banning plastic bags was not enough. In Dubai, they still wrap shopping in plastic bags, but you won’t find any plastic bags littering the streets. Numerous trash cans that are regularly emptied keep the city looking spick and span. What’s more, there are different bins for liquid waste, bottles and cans and general trash to facilitate waste management.

Travel in Nairobi and elsewhere around the country is invariably punctuated by hours wasted in traffic. In the entirety of my stay in Dubai, traffic was constantly flowing. I counted seven lanes on the highway, and the movement was linear, not clogged up by junctions and roundabouts. For public transport, there were metros and taxis, no matatus and boda bodas zigzagging about and causing chaos. And there’s no jaywalking; you have to use a zebra crossing or pay a Dh400 fine (about Sh11,000).

We once went shopping in the middle of the night, found someone working out in a park, and a collection of high-end cars left in the open, including three Audis, a Porsche, two Mercedes and a Range Rover. In Nairobi, being alone at night is asking for trouble, and even a modest car can be stolen in broad daylight. A sense of security is the first thing someone wants when away from home, where losing a passport alone could be a nightmare. In Dubai, there are CCTV cameras everywhere, so if you try anything funny, you will be caught.

The definition of fun for many Kenyans is hanging out at a bar or a club and drinking for hours on end. In Dubai, alcohol is frowned on, so it is scarce and costly. If that sounds like a ticket to boredom, wait till you get to Ski Dubai, where under one roof you can go bobsledding, skiing, chair lifting, giant ball riding, tubing running, go-kart crashing and penguin watching. Or to Dubai Aquarium, where sharks and rays glide harmlessly around you. Or to Dubai Parks and Resorts, where between Motiongate, Bollywood and Legoland, you could have thrills and spills to your heart’s fill. It’s what Nairobi Show would wish to be when it grows up. We have an ice rink here, a go-kart there, but nothing on the scale that would host thousands of revellers per day and keep them engaged for hours on end.

While the Nation reported pollution in Nairobi, Emirates Today led with the story: 12 ways to reach 20 million tourists by 2020. Dubai is in a desert and doesn’t have the lions and elephants of Kenya. It is as arid as Northeastern region, which has long complained of being marginalised. Dubai, on the other hand, created something out of nothing: Desert Safari. Here, you can enjoy dune bashing, camel riding, tanoura dancing and belly dancing. Besides that, Dubai has been aggressive in luring tourists through marketing and promotions. If you are flying through Dubai, for instance, you can get a 50 per cent discount to stay in the city for three days. And though prices are generally high, look around and you’ll get good deals, for instance, at Carrefour. All in all, while Dubai received 15 million tourists in 2017, Kenya only got 1.4 million.

Drive around Kenya and you will see huge tracts of idle land owned or grabbed by the who’s who of politics and business. This is counter-productive. The building boom that made Dubai what it is today was down to land reforms in 2002, when Sheikh Mohammed issued a decree allowing foreigners to own real estate in Dubai — a first in any Gulf state. Before then, all land was held by the sheikhs and their friends; everyone else was a renter. With the reform, the city experienced a massive transformation that changed its skyline and population. They even reclaimed land from the ocean to form La Mer beach here, Palm Island there, and more tourist attractions.

In Kenya, we pay a lot of taxes but are plagued by uncollected trash, insecurity and food and water shortages. Dubai never even charged taxes until this year, when it introduced a five per cent VAT, but service delivery is world-class. For instance, water is derived from the ocean, and it is never salty due to desalination — something Mombasa desperately needs. And the city never ever experiences blackouts. This drew a wry laugh from my one of my compatriots, for there was a blackout just before he left home for the trip. With proper resource utilisation, such problems would be a thing of the past. Instead, we yearly hear of billions of shillings in revenue gone missing.

The National Archives in Nairobi is a lonely landmark in town. You won’t see tourists flocking to see it. Locals only use it as a meeting point. The few who venture into its realms recount stories of dusty interiors and old-school displays. Step into The Frame in Dubai and you are wowed by the projections on the walls, how history comes to life to show you what was once a sleepy Gulf port. You get to the top and see how the city has been demarcated between Old Dubai with its low-rise buildings and New Dubai with its iconic skyscrapers. The old section was left intact for historical purposes, you learn. On top of seeing the past and the present, you also get a glimpse of the future Dubai through a video showing its ambitious plans for hi-tech healthcare and transport. It looked like something out of The Jetsons.

I went to Dubai expecting to be lost in the razzmatazz of an industrial city, but found it had something more, a place that opens the doors to the ways of its people: The Sheikh Mohammed Centre for Cultural Understanding. In Kenya there are cultural nights and cultural shows, but more for fun than enlightenment. Here, you learn how Emiratis receive guests, why they dress as they do and how they keep their traditions alive. In other words, you get to see the human side of this community. Yes, they don’t allow hugging and kissing in public, but they are generally more liberal than other Arab countries, which makes them popular with tourists and expats.

Nairobi is full of people throughout the day, either walking from stage to stage, haggling with hawkers, idling on benches or just standing at certain landmarks-turned-meeting points. There are street children, beggars and homeless people harassing passers-by for handouts and sometimes mugging them. In Dubai, if you want to sell goods, you must have a shop. That spares authorities the cat-and-mouse game with hawkers. There are hardly any public seats, so you need to be on the move. Even in malls, many are the times we got tired of walking and sat at the nearest spot, only for an attendant or security officer to come round in an instant and ask us to move on. Public service vehicles don’t ride up to pavements and turn them into stages. And as unemployment and illegal immigration are kept in check, you won’t find busybodies nagging you. This leaves the streets looking safe, clean and spacious.

Overall, what Dubai has done, Kenya can do. With all the land, wildlife, relatively favourable weather and even recent discovery of oil in Turkana, Kenya is well-poised to become a dream destination, if only it has the right leadership.

The jewel of the desert where celebrities like to go. The chance of a lifetime to sample the delights. Bigger, faster, louder than anywhere else. Where else but Dubai, baby! Skyscrapers, desert safari, theme park, light show, even snow! Discover all that's possible. Full story on: http://bit.ly/DxbLssns4Knya Please like, subscribe and share. #MyDubai #visitdubai #UAE