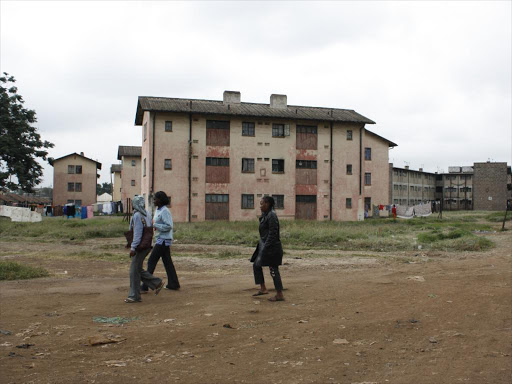 People walk past the railway housings at Makongeni in Eastlands Nairobi

The growing population in Nairobi has triggered major economic, social and political concerns.

But experts say the biggest challenge revolves around solving the housing shortage and safeguarding against mushrooming of slums.

In the last 10 years, Nairobi’s population has been increasing drastically. The resulting impact has had cross-cutting effects on all sectors of the city’s economy, with housing shortage becoming a major concern.

Statistics indicate about four million people live in the city county, which covers 684 square km. More than 60 per cent of them reside in slums. On average, five to seven of them share a room. In general, 84 per cent of Kenyans rent houses, only 16 per cent own houses.

Governor Evans Kidero says the county has a housing crisis presented by lack of access to low-cost, affordable and adequate housing for most urban residents.

Kidero says incomes of most urban residents are low so they cannot get mortgages. Most residents earn less than Sh22,500 a month or Sh270,000 per year.

The governor says the proportion of monthly income spent on housing-related costs, including utilities for urban renting households, is about 42.3 per cent, 12.3 per cent higher than the internationally accepted standard of 30 per cent.

These disturbing statistics propelled the county to swing into action. It

has forged a public-private partnership with investors

to redevelop several estates through a programme referred to as the Urban Renewal Programme.

City Hall’s old, dilapidated residential estates, some constructed in the 1970s, will be demolished and high-rise units built to accommodate more people and ecomomise on space.

More than 100,000 new units are expected to be produced through the comprehensive plan to accommodate about 650,000 people.

The programme will leverage public land in the old residential estates to attract private sector investments in housing, infrastructure and services.

To effectively roll out the programmes, the county has divided the implementation into phases. The first phase covers seven estates in Starehe constituency and will involve construction of about 10,200 high-rise units.

Kidero says there are only 535 houses in the estates. “These houses are very old and were constructed horizontally, occupying a lot of space.”

adjacent to Pangani police station has retained some of its

features and could be retained were it not for want of space.

estate comprises 12 blocks, each with four two-bedroom units. Each block has a servant quarter made of four rooms.

Old Ngara is probably the oldest, as the name suggests. It was built in the 1970s. It is located on Musindi Road, behind the Equity Bank branch. It is the closest estate to the central business district.

The estate, commonly called “Fort Jesus” for its fortress and forbearing looks, comprises mainly one-bedroom houses. The estate, which sits on 3.5 acres, is flanked by eight blocks on one side and seven blocks on the other side, which are an assortment of two and three-bedroom houses.

The 500 one-bedroom units in the Uhuru estate have been targeted for redevelopment. The estate, which sits on 65 acres in Eastlands, has been swarmed by illegal structures. The county target 3.2 acres of this piece to put up modern houses.

At the New Ngara estate, the county wants to put up high density units owing to its proximity to the CBD. The estate has 136 units from its 17 blocks, each comprising of eight houses.

The county government embarked on the programme with the awarding of Sh61.5 billion contracts to seven investors-banks and real estate firms- to redevelop the estates targeted in the first phase.

However, only two investors signed the contract with the county after it emerged that it did not have title deeds for the other estates.

“We are working on the issue with the ministry and the National Land Commission. As soon as we get them (title deeds), we will sign the remaining contracts.”

Bachelors/Jevanjee estates will be redeveloped by Jabavu Village Limited at a cost of Sh9.1 billion. About 1,500 units will be added to the current 80 units.

Lordship Africa was awarded a contract to build 2,520 houses in Ngong Road estate at a bid sum of Sh24 billion.

New Ngara will be redeveloped by KCB/S&L, which won a Sh9 billion tender to put up 1,500 houses.

M/S Sovereign Group Limited will put up 1,000 high-rise houses in Pangani estate from the current 48 units.

About 1,050 units will be built in Suna Road estate by Directline Assurance Limited at a cost of Sh3.5 billion.

Although City Hall has maintained that all the affected tenants will be duly compensated and given priority allocation of the apartment once the project is complete, it remains a major concern and worry to the tenants.

Urban Renewal executive Tom Odongo says the tenants have been asked, through their welfare associations, to prepare deals which will be harmonised with the county's, detailing all the agreements.

“The law requires we give three-month notice. But because this is a consensual project, whose aim is to deliver affordable houses and protect the interests of existing tenants, we saw it fit to pay them for relocation and 24 months’ rent,” he said.

Odongo says the existing tenants will be allocated new units for purchase through the Tenant Purchase Scheme.

Kidero says a special Tenant Purchase Scheme will be established to assist the affected tenants acquire the houses as they cannot participate in mortgage market.

“The Urban Renewal Projects have ensured social dimension in the sense that they provide adequate safeguards for the existing tenants. They will be paid relocation compensation for the period of the construction,” he says.

Resistance from residents, lack of titles deeds for the estates and politics might derail the project.

The residents have demanded a halt to the plans, claiming the county has concealed vital information on the project.

They say City Hall has not involved them in the processes and has not committed in writing how they will be compensated.

"No agreed deal between the two parties. No details on the proposed timelines and the cost of the modern houses to the sitting tenants," Jevanjee Welfare Group secretary general Leonard Obonyo said.

The residents have also been outraged by reports that a three–bedroom apartment will be sold at Sh8.3 million.

They said the price is high and City Hall has refused to provide bills of quantities to them for verification.

They also objected to the inclusion of a five-per cent mark-up on the apartment prices, contrary to Kidero’s assurance that the houses would be sold to them at zero profit.

The three-bedroom apartments are being offered to the tenants at Sh7.9 million, which rises to Sh8.23 after factoring in the mark-up.

“The Sh7.9 million cannot be the cost of the construction. It is too high, but we can’t verify because they have not given us the documents,” Old Ngara Welfare Association official Martin Njoroge said.

Politics is another major stumbling block. Already, Starehe MP Maina Kamanda has called for the projects to be stopped until all grievances raised by residents are addressed.

Also, while the seven contracts were awarded to private investors, only two of them were actually signed. Kidero said the county lacked titles deeds for the targeted estates but expressed confidence they will soon get the documents.