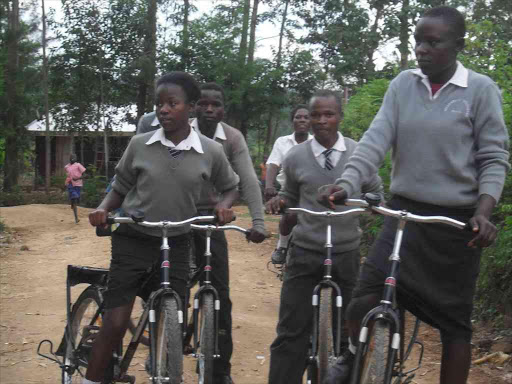 Beneficiaries of the bikes for education program.

*Irene Wafula’s life took a sharp detour two years ago when she fell pregnant at only 17 years and while still a Form three student at Mahanga ‘K’ Secondary School in Mahanga village, Kakamega County in Western Kenya.

Unfortunately hers was not the only incident, there were others too. Of girls who had to chose between early motherhood and an education.

These incidences confirming earlier reports that adolescent and teenage pregnancies were on the rise particularly the 2013 Kenya Population Situation Analysis which showed that 103 in every 1,000 pregnancies are attributed to girls between 15 and 19 years.

“Academic and child welfare stakeholders became very concerned and a solution was quickly needed before all our girls dropped out of school due to early pregnancies,” explains Judith Okungu, a child well being facilitator at the World Vision.

There were other concerns too. Reports, particularly the 2015 study released by the United Nations Children’s Fund (Unicef) titled Statistical Update on Children, Adolescents and AIDS, shows that AIDS is a leading cause of death for African teens.

Even more alarming is the fact that Kenya is one of the six countries accounting for nearly half of the world’s young people aged 15 to 19 years living with HIV. Other than for India, the rest are in Africa and they include Tanzania, South Africa, Nigeria and Mozambique.

The Ministry of Health’s fast track plan to end HIV and AIDS shows that only an estimated 24 percent of teens aged 15 to 19 years know their HIV status. Still in this age group, only about half have ever tested for HIV.

Against this backdrop and the devastating implication the scenario has on the education sector and the well being of children across the country, the World Vision teamed up with the World Bicycle Relief under a project dubbed Bicycle Education Empowerment Program in a unique way to get to the root of the problem.

This is particularly due to the fact that the 2013 Kenya Population Situation Analysis Report further showed that 26 in every 100 girls in Kenya are married before they reach 18 years.

“Academic stakeholders had realized that girls in communities where students walk long distances to get to school were the most vulnerable,” explains Enock Keya, the head teacher, Mahanga ‘K’ Secondary School.

He explains that on the way to school the girls are lured by boda boda operators with free rides and a little pocket money and before they know it, the girl falls pregnant.

The 2015 National Adolescent and Youth preliminary report released recently on explaining the root causes of early pregnancies lay the blame squarely at the foot of teachers and boda boda riders.

Confirming earlier concerns expressed in regard to adolescent unsafe sex behavior, the report revealed that approximately 47 percent of young women aged 18 and 24 and their male counterparts had their first sexual experience before the age of 18.

Further showing that at least 15 percent of young women between the ages of 15 and 19 are already mothers and that three percent are pregnant with their first child.

According to Wafula, fellow students were also culprits “they escort us home or to school because of the early and late hours. School often ends just before six so if you are walking for three kilometers and it is through bushes you feel scared.”

She says that this long trek often leads to a “special friendship when one particular boy escorts you and soon you find that you are pregnant.”

Wafula further says that because the girls who have fallen prey are often so young some even in Form one, they do not realize what is happening to their body until the pregnancy begins to show.

“I started adding a lot of weight all over sudden and feeling uncomfortable since people were teasing me. I did not know that it was because I was pregnant,” she says.

Carrying the pregnancy to term and the actual delivery was a difficult experience for young Wafula whose body and mind were not prepared for the rigors of child birth.

But after the pregnancy her mother encouraged her to go back to school but being both student and mother was a difficult balance to strike.

“I would get to school very late since I had to breastfeed and get home too late to properly spend time with my child. Then I was approached and told that students were being given bicycles,” she says.

According to Okungu, bicycles have become a double edged sword, they are a solution and are preventing further pregnancies while also assisting those already pregnant to cope with the new responsibilities by getting to school on time and being home before dark.

“When girls ride their own bicycles they do so in groups and so other men are intimidated and are unable to approach them as a group compared to when a girl would just wander home alone,” Keya observes.

He further says that boda boda riders cannot lure them with free rides because they already have their own.

Students and other young men looking to lure the girls are also locked out “and since this program launched last year we have seen significant improvement,” he adds.

He says that the grades are higher since most students who walk long distances can get to school on time and stay till late.

The school has not experienced additional cases of pregnancies and for the first time in the history of the school, girls are catching up with the boys in all subjects.

The bicycles were originally meant to assist students walking long distances to access school but have ended up serving a more noble cause.

Eligible students are those walking at least three kilometers daily to access an education and although boys have benefitted too there is a bias towards the girl child.

An estimated 889 bicycles have been given to students in Siaya, Uasin Gishu and Kakamega.

Students are only required to pay Ksh1, 000 for the spare parts and the bicycle officially becomes theirs.

Guardians and parents are allowed to use the bicycles over the weekend to run errands such as going to the posho mill but they cannot use the bicycles during school days. The area Chief and other academic stakeholders are also involved to ensure that the rules and regulations are followed to the letter.

Post a comment
WATCH: The latest videos from the Star
by MIRIAM LESENI
Big Read
15 September 2016 - 02:00
Read The E-Paper