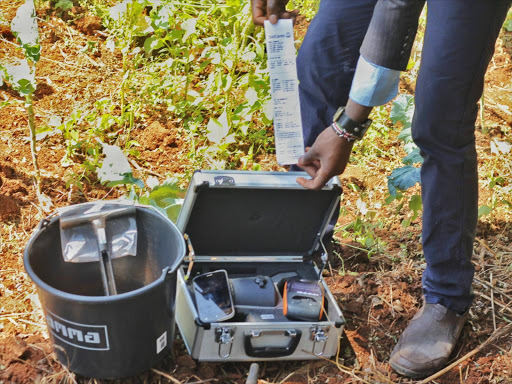 The low food production in Kenya has been partly attributed to declining soil fertility due to soil acidity, which occupies 13 per cent of the country’s land area, according to soil experts.

Agriculture CS Willy Bett said most soils are becoming increasingly acidic due to the use of one fertiliser, especially DAP, for a long time.

According to a report published in the Agriculture and Ecological Research International Journal, soil acidity is associated with aluminum, iron, hydrogen and manganese toxicities in the plant root and deficiencies of calcium, magnesium and potassium, which lower soil fertility and productivity.

To increase productivity, a simple soil test kit has been developed to test soils and give farmers suggestions or recommendations on soil improvement in 30 minutes’ time.

“With this soil scanner, you do not need to have a chemistry degree to run a soil test. Once a scan of the soil has been done, it is sent to a database in the cloud, where the analysis and recommendations are done. The agent then receives a PDF on his email that can be shared with the farmer. It’s an easy-to-operate laboratory without chemicals involved, and it doesn’t require a lot of maintenance, so it can be operated by almost anybody,” said Der Meer.

He said they have been doing soil testing in Africa for 10 years and realised there is poor infrastructure to help farmers get to the laboratory.

“So if we want to help this group, we have to bring the laboratory to them. So our first move was to change and move that technology into a truck and start moving laboratories out to the countryside. We have four mobile soil-testing laboratories serving farmers in Bungoma county,” he says. “But we realised the movement from place to place was still cumbersome for farmers, and that is when we came up with the idea of the hand-held soil scanner.”

He said the hand-held device is an on-the-spot testing used in the field and it takes approximately 30 minutes.

A farmer does not have to wait for two weeks or months to get the soil test results, as is the case currently.

“We aim to provide stakeholders with this equipment to advise farmers based on facts, so they can make informed decisions on what inputs to use to improve yields,” he adds.

The hand-held soil scanner will cost Sh225,000, and that’s why the company is partnering with agrovets, commercial extension officers, outgrowers, cooperatives or anyone who has direct connection with farmers in the field to give advice and input.

“We expect to sell about 1,000-2,000 scanners to benefit about two million farmers. We want to partner with financial institutions who can offer loans to those who cannot afford to buy the soil scanner. We want to create a package for people to make an investment and pay it within one or two years,” Der Meer said. He added they will be training the agrovets and dealers and that in future, one could

Der Meer said soil acidity varies from farmer to farmer, as each farm has its own history, so the person doing the soil test should advise the farmers where necessary. He added that the test gives recommendations on the best solution, as well as the available fertiliser product.

The kit is on trial phase and will be launched in September in Kenya and by end-year in Tanzania. The technology has already expanded to other countries like Burundi, Ivory Coast, Rwanda and Zambia.

How the soil test kit operates

Jacob Gathuru, a soil nutritionist explained that the hand-held scanner comes with a durable case with a rechargeable scanner and hand printer ,and one has to have a smartphone to download the soil-care application.

“The farmer needs to collect soil from at least 20 points to get a good sample. Using a jembe or panga, dig a depth of 20cm and put it in a bucket and mix the soil thoroughly and take only 1kg soil sample. Put it in the calibration cup and scan for about 30 seconds, upload the data via the app on your phone, wait as the data is collected and analysed before you can receive your report, which you can print via the hand printer and give the results to the farmers instantly,” Gathuru adds.

He said the information received in the database is analysed and recommendations given by experts.