One boy's fight to save his family from starvation

He is wearing his only shirt and trousers, and clutching his one other possession - a new schoolbook.

• Eleven-year-old Dahir weaves his way between a growing cluster of homemade huts on the edge of Baidoa, heading to a tin-roofed school building near the main road. Dahir's brother died of hunger. Now two of his sisters are fighting sickness and malnutrition. The BBC's Andrew Harding returns to Baidoa to revisit a family forced to flee Somalia's worst drought in 40 years, as authorities urge the international community to recognise the crisis as a famine.

Warning: This article contains images some readers may find distressing

Eleven-year-old Dahir weaves his way between a growing cluster of homemade huts on the edge of Baidoa, heading to a tin-roofed school building near the main road. He is wearing his only shirt and trousers, and clutching his one other possession - a new schoolbook.

For a few minutes, a burst of interest energises the children, but soon the yawns and coughs resume - signs of the hunger and sickness that echo, like a grim soundtrack, across the plateau of rocky ground around Baidoa that has become home in recent months for hundreds of thousands of civilians, displaced by the worst drought to hit Somalia for 40 years.

"I think at least 30 of these children have not had breakfast. Sometimes they come to me to tell me of their hunger," says Mr Ahmed. "They struggle to concentrate, or even to come to class." 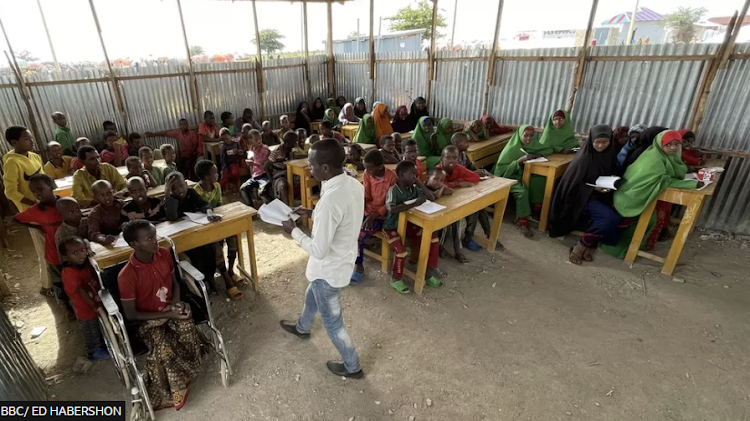 Six weeks ago, on our last visit to this part of southern Somalia, Dahir sat, weeping, beside his mother Fatuma, outside the family's flimsy home-made hut.

A few days earlier, his younger brother, Salat, had starved to death on the journey into Baidoa from the drought-parched countryside.

Salat was buried a few metres away. Now the grave is surrounded by huts built by newer arrivals.

"I'm worried about my sisters. I wash for them. I wash their faces too," says Dahir, glancing across at six-year-old Mariam, who coughed hoarsely and complained of a headache, and then at four-year-old Malyun, sitting lethargically and with sunken eyes on her mother's knee.

"She is warm. I think she has measles. They may both have measles," says Fatuma, putting her hand to Malyun's forehead. 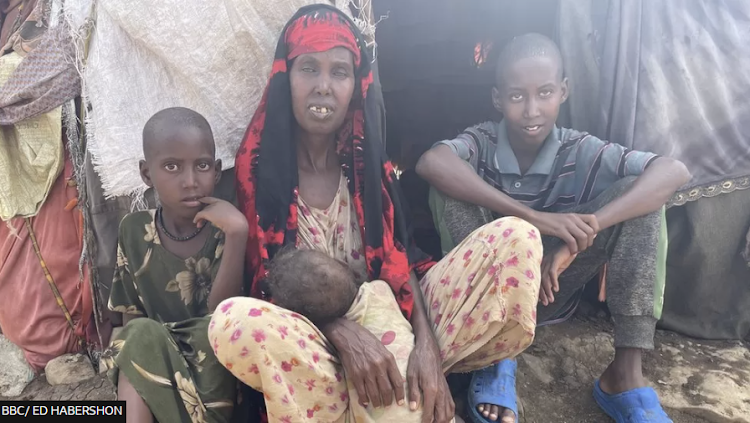 Fatuma (centre) had no time to grieve the death of her son, she told the BBC

Measles and pneumonia have swept through Baidoa in recent months, killing many younger children whose immune systems have been weakened by malnutrition.

At the provincial hospital in the centre of Baidoa, doctors and nurses move between beds in the intensive care ward, inserting fluid drips into emaciated infants' arms, and oxygen tubes into tiny nostrils.

Several children's limbs are dark and blistered - as if from severe burns - one painful reaction to prolonged starvation.

"We have received some more [aid] supplies. But still not enough," says Abdullahi Yusuf, the hospital's head doctor.

"The world is paying attention to Somalia's drought now. We see visitors from international donors. But that doesn't mean we are getting enough support. I hope it will come soon. It is a desperate situation."

Six weeks ago, he described the situation as "terrifying." Today he acknowledges a slight drop in admission numbers but explains that was probably due to a few days of rain which had disrupted some dirt roads and prompted some families to focus on trying to plant crops rather than bringing sick children to hospital.

The situation is 'getting worse'

Back at the camp, Fatuma lugs a plastic jerrycan of water home from a communal tap. Dahir emerges from the hut to help her clean a battered metal bowl while her ailing daughters lie, wearily inside the hut.

"My boy is a big help. He does so much to help the girls," says Fatuma.

While she boils water, her phone rings. Her husband, 60-year-old Adan Nur, is calling from their home in a village three days' walk away, in territory controlled by Islamist militant group al-Shabab.

"He says he's planted sorghum. He's okay. He will return soon. But we have lost all our livestock. There is no way we can make a living from just the crops, so I will stay here. That way of life is over," says Fatuma after the call is over.

Her decision is backed up by the views of many experts, who warn that this rainy season appears to be failing, just like the last four - spreading a blush of green across the wilderness outside Baidoa but making no real impact on the crisis.

"It's still getting worse. A lot of people are still coming here to seek food, safety, and water. And many children are dying of malnutrition. We urge [the government and international community] to consider the situation… as a famine," says Baidoa's Mayor Abdullah Watiin, stepping briefly out of a community meeting in a heavily guarded compound.

Inside the hall, an army general warns local people about the growing threat from al-Shabab, telling them to be on the look-out for explosive devices and ambushes.

Somali government troops and militias are expected to widen an offensive that appears to have been met with some success further north, but that risks making it even harder to access some rural communities hit hardest by the drought.

Later in the day, Fatuma settles her two sickest children - Mariam and four-year-old Malyun - on a blanket on the dirt floor of their hut.

An offer to take the children to hospital was rejected in favour of a course of traditional herbal remedies. Then Fatuma, weary too, lies down beside the girls.

"I just want them to get better," says Dahir, watching from his own small blanket, then solemnly repeating the phrase two more times.