While seeking dialogue, Uhuru did not rule out other means of protecting Kenya’s maritime territory

• President Kenyatta said Kenya rejects court decision "in totality" and does not recognise the findings of the decision, terming it erroneous. 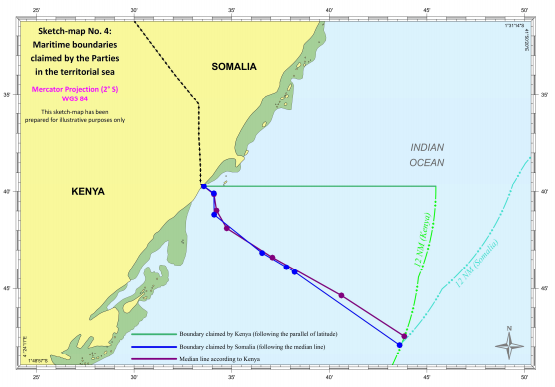 MARITIME DISPUTE The line that it constructs on this basis lies slightly to the north of the line proposed by Somalia.
Image: ICJ

Diplomatic relations between Kenya and Somalia are expected to deteriorate further following the ICJ judgment favouring Somalia in the two states' maritime dispute.

The ICJ on Tuesday divided the disputed area of 100,000 square kilometres in favour of Somalia, dividing it roughly in half.

The coveted area is rich in oil, gas and fisheries.

In response, Somalia President Mohamed Farmaajo welcomed the ruling and asked Kenya to respect it.

Kenyan President Uhuru Kenyatta, however, said his country rejects the judgment in its totality and does not recognise its findings.

“This decision is, in the circumstances, a zero- sum game, which will strain the relations between the two countries. It will also reverse the social, political and economic gains; and potentially aggravate the peace and security situation in the fragile Horn of Africa region,” President Kenyatta said.

He spoke on Tuesday in the US, where he was attending a meeting in the United Nations. Kenya is a member of the 15-nation UN Security Council and is chairing this month.

The President called on the international community to create an enabling environment for a negotiated settlement.

However, he did not rule out other means of protecting Kenya’s maritime territory.

“Kenya, like other independent countries, possesses a determined geographical territory. As a devoted member of the UN, the UN Security Council as well as the African Union’s Peace and Security Council, we beseech the rest of the family of nations to appreciate and respect our inherent right to protect, by all available means, our territory,” the President said.

“… when I became President on 9 April 2013, I took an oath to protect the territorial integrity of the Republic of Kenya. I do not intend to abrogate my solemn oath.

"I will do everything possible as President and Commander-in-Chief to preserve the territory of this our great Republic and bequeath the same, intact and unencumbered, to the next President when my term expires in less than a year," he said.

In July, the President said in Lamu his government will not cede even an inch of its soil to anyone or any state.

Speaking in Boni forest where he visited the multi-agency security teams undertaking joint training, the President said although Kenya is a peace-loving country, it will not allow an inch of its territory to end up in the hands of another country.

“As a peace-loving country, we are not the type to be attacked or threatened or even allow an inch of our country to end up in the hands of other people. We are ready to defend ourselves just as we have defended peace in other countries,” he said.

On the other hand, Somali President Mohamed Farmaajo, termed the ruling as a “historic victory after the long struggle by the people and government of Somalia against the unlawful attempts by the Kenyan government to claim parts of our maritime territory”.

“Justice has prevailed. Law and order have prevailed. This victory belongs to the Somali public who have always supported and stood by their government and their elected leaders.

"Each time we unite for the purpose of patriotism and the defence of our nation, this kind of victory always follows,” he said in an address on Tuesday.

He made strong allegations against Kenya.

Farmaajo accused the Kenyan leadership of directly interfering with Somalia’s domestic politics “by mobilising political groups in Kenya to create an atmosphere of chaos and political instability in Somalia that would ultimately lead to the withdrawal of the case from the court” and violating its sovereignty.

He alleged Kenya waged a misinformation campaign in Kenyan and international media to tarnish the reputation of the Somali leadership.

“The Kenyan government waged a military campaign violating our nation’s sovereignty and the public interest of the Somali people. This military campaign included indiscriminate air and land strikes inside Somalia’s borders. These strikes targeted the lives and properties of Somali citizens,” he said.

“Additionally, Kenya undertook measures that fall outside of political and diplomatic norms, waging a strong campaign at the United Nations to place Somalia under the UNSC 1267 resolution.

"[This] would have facilitated the labelling of Somali business community, government officials and humanitarian workers as terrorists, allowed for the arbitrary confiscation and freezing of their assets and ultimately cripple the country’s economy,” he added.

Regional experts said the judgment was delivered at a time when the Horn of Africa is fragile.

Murithi Mutiga, Horn of Africa project director at the International Crisis Group, on Tuesday said the decision marked the end of a judicial process that has unfolded amidst an alarming deterioration of relations between Kenya and Somalia.

“Both sides adopted an inflammatory and nationalistic approach to the issue, and instituted tit-for-tat measures that affected diplomatic and trade ties,” Mutiga said.

Meron Elias, Horn of Africa researcher at the Crisis Group, warned the political stakes of the case are sky-high in both countries.

She said there is a risk the ruling could be followed by a further slide in ties between Kenya and Somalia.

“This scenario should be avoided as the unravelling of relations has already negatively impacted efforts by Nairobi and Mogadishu to confront al Shabaab’s lethal insurgency," Elias said.

"Far better than more confrontation would be talks to agree on a mutually accepted way to implement the judgment,” she said.

Other observers said Kenya is further pushing for negotiations, even with the judgment.

Rashid Abdi, who analyses the Horn of Africa, said that following the ruling, Somalis are now more amenable to dialogue since the ICJ has more or less vindicated their claim.

"Kenyans are aggrieved but need not be. Somalis are a nation of dealmakers. What they seek is fairness. Two countries can settle the dispute amicably if they stay calm, avoid escalation,” Abdi said in a tweet.

Ahead of the ruling, former foreign affairs editor at the Daily Nation Media Group John Gachie said Kenya was trying to reopen negotiations by maintaining it would not accept the ICJ ruling.

"This is a political, diplomatic and to some extent security move by Kenya not to be caught pants down. It seeks to reopen the entire process," Gachie said on the phone. He is an expert on the Horn of Africa.

Having had a fragile diplomatic relationship since the filing of the maritime case in 2014, it won’t be surprising, as President Kenyatta hinted at, for the two countries to severe relations as Kenya pushes back.

For instance, it has already announced closure of Kakuma and Daadab refugee camps, a move that would affect Somalia greatly and cause hardships to its nationals freeing the insecurity in the country.

Farmaajo said that finally, justice has prevailed for the people of Somalia.
News
3 months ago

Ruling is expected to end seven-year maritime case that Somalia filed at the ICJ in 2014
News
3 months ago
by ELIUD KIBII Subeditor and writer
Africa
15 October 2021 - 23:00