What next? President Suluhu receives Covid report from experts

• Suluhu was handed over the report on Monday by the taskforce chairperson Prof. Said Aboud Ikulu at the Dar es Salaam State House.

• The president is expected to update the county on what the experts have recommended the country to do regarding the virus. 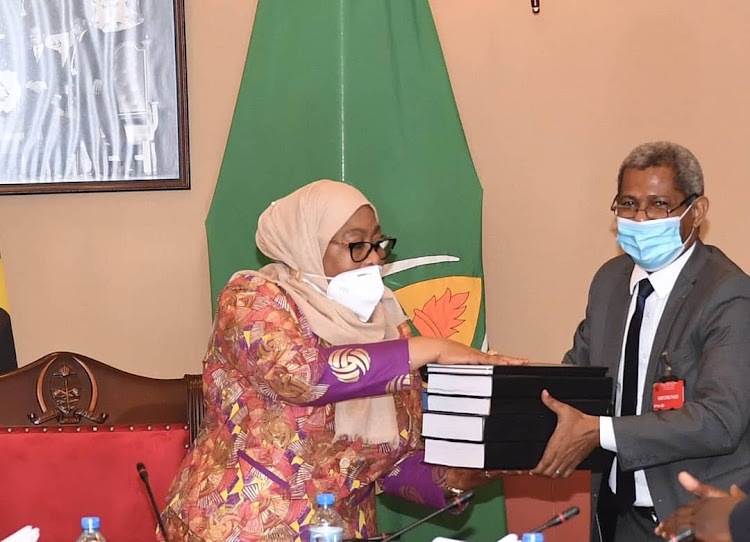 Tanzanian President Samia Suluhu has received a report from a committee of experts who had been tasked to carry out research on Covid-19.

Suluhu was handed over the report on Monday by the taskforce chairperson Prof. Said Aboud Ikulu at the Dar es Salaam State House.

The president is expected to update the county on what the experts have recommended the country do.

Suluhu had earlier said the country will pronounce its stand regarding the pandemic once its experts had analysed the information without depending on the foreign information and reports.

In her remarks during the swearing-in ceremony of newly appointed government officials at State House in the capital Dar es Salaam in April, Suluhu said Tanzania could no longer isolate itself from what is happening across the world in terms of the pandemic.

‘We will form a committee of experts to tell us how the situation is and what the world is advising us to do. We cannot isolate ourselves like an island and we cannot receive what is being brought to us without analysing it and doing our research,” Suluhu said.

The move was seen as a policy shift by the country under Suluhu's administration from the hard stand on the virus by her predecessor the late John Magufuli.

While on her two-day official visit to Kenya, Suluhu said the partnership between Kenya and Tanzania would strengthen the fight against the virus.

Tanzania issued its last communication report to the public regarding the virus in the country in May 2020, when it had 509 cases and 21 deaths related to the virus.

The country was not among the countries in the continent that had requested the supply of Covid vaccines from Oxford-AstraZeneca which were supplied by the COVAX Facility early this year, where Kenya received over one million doses.

“We cannot isolate ourselves like an island from the rest of the world.”
News
2 months ago
by KEVIN CHERUIYOT Online Journalist
Africa
17 May 2021 - 15:57