During the 21st Ordinary Summit that was held virtually, it was noted that not all partner states are in a position to sign, ratify, and implement the EPA agreement

• President Kenyatta on February 27 took over the chairmanship of the EAC, while Kenya’s Peter Mathuki appointed new secretary general 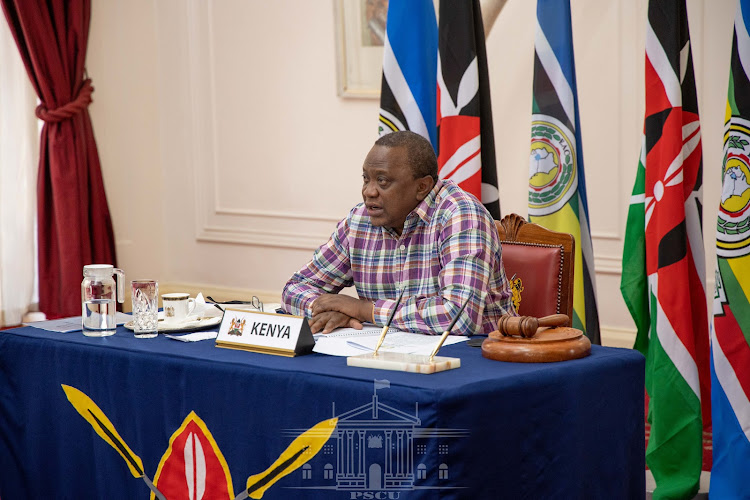 President Uhuru Kenyatta addresses the the 21st Ordinary Summit of the EAC Heads of State on Saturday, February 27, 2021
Image: PSCU

The European Union looks forward to engaging Kenya on the implementation of the Economic Partnership Agreement between the EAC and EU as Nairobi takes over the leadership of the economic bloc.

President Uhuru Kenyatta on February 27 took over the chairmanship of the EAC, while Kenya’s Peter Mathuki was appointed the new secretary general.

In his congratulatory message to President Kenyatta and Mathuki, EU Commission Executive Vice President Valdis Dombrovskis said he looks forward “to engaging on the implementation of the Economic Partnership Agreement between the EAC and the EU”.

Tweeting after the meeting, outgoing EU Ambassador to Kenya Simon Mordue said, “Hugely significant language from today’s EAC summit opening the way for implementation of the Economic Partnership Agreement under the principle of Variable Geometry”.

Variable geometry is a strategy that allows negotiations of one or more particular issues to lead to an agreement that is not binding on all of the parties to the agreement.

During the 21st Ordinary Summit that was held virtually, it was noted that not all partner states are in a position to sign, ratify and implement the EPA agreement but recognised the importance of some partner states to move forward.

Congratulations to H.E. President Kenyatta for assuming the chairmanship of the East African Community at this crucial moment for the region when advancing integration has never been more important. @StateHouseKenya @ForeignOfficeKE https://t.co/fcEwRrPNfH

“The summit concluded that partner states who wish to do so should be able to commence engagements with the EU with a view to starting the EU-EAC EPA implementation under the principle of variable geometry,” the communiqué said in part.

Kenya and Rwanda have already signed the deal but it could not be operationalised without all the EAC members' signatures.

The EPA was a sticky issue during the 20th Heads of State Summit in Arusha on February 1, 2019, with Tanzania insisting that it must be allowed more time to send experts to EU headquarters in Brussels to present its grievances.

Tanzania argued that the agreement would have serious consequences on its revenues and the growth of its industries.

Three scholars commissioned to analyse the agreement — Prof Palamagamba Kabudi (now Foreign minister), Dr Ng’waza Kamatta and Dr John Jingu, all from the University of Dar es Salaam — warned that should Tanzania ratify the deal, it “would be the beginning of an end to Tanzania’s industrialisation vision”.

“This is a bad deal, let’s not forget that our products have no chance of competing with those coming from Europe. I thus wouldn’t advise the country to sign it, for our economy will deeply suffer if it does,” Prof Kabudi said at the time.

In an opinion article, former Tanzania President Benjamin Mkapa said such a high level of liberalisation vis-à-vis a very competitive partner was likely to put Tanzania’s existing local industries in jeopardy and discourage the development of new ones.

Burundi has also maintained that it will not agree to sign the trade deal, given its deteriorating relations with Europe after was sanctioned by the EU following political unrest in 2015.

With the new administration of President Évariste Ndayishimiye, Burundi may loosen its hardline position.

Upon taking up the EAC chairmanship, President Kenyatta said he will focus on strengthening partnerships to enhance intra-EAC connectivity and ensure sustainable implementation of projects and programmes.

Uhuru committed to ensuring a more united and prosperous EAC.

Uhuru said he will spare no effort towards the realisation of the shared aspirations that gave rebirth to the community 20 years ago.

• The deal rans the risk of threatening EAC integration efforts, and particularly, the integrity of the EAC customs union. •Kenya need a balancing ...
Business
7 months ago

Uhuru takes over chairmanship of EAC from President Kagame